Beyond its dual-arm design and sensing features, YuMi is unique in the collaborative robot space. Now, ABB releases its one-arm spin-off with newly added features that make it even more versatile.

One of the many collaborative robots currently on the market, the YuMi robot, was released by ABB Robotics in 2015. Routinely featured working alongside people, the traditional YuMi is easily identifiable by its dual-arm humanoid figure and continuous motions within 3D space.

ABB boasts 6 axes of freedom on its YuMi co-bot, making its movements natural and fluid across a reasonably sized working range. The robotic arm has a padded body and no pinch points at the joints, making it safe to work alongside humans without the need for safety barriers and cages.

Like many 6-axes robots on the market, YuMi is known for its ability to amplify work line efficiency and generate profits due to faster production speeds.

YuMi is employed heavily in workstations for pick-and-place and small assembly operations. The YuMi robot typically operates in one spot at a time. Overall, YuMi robots enable humans to do other work like research while being aided by a robotic assistant.

The company has recently released a one-arm version of its YuMi robot to satisfy contractors and companies' needs to use YuMi robots in their fields. The new arms can stand alone or combine other YuMi robotic arms to strategically coordinate movements, work faster, and complete complex operations over a more expansive working space.

The new YuMi one-armed robot has 7-degrees of freedom, making it even more capable of entering closed or confined spaces. Though they tend to be pricier, robots with 6 degrees of freedom have become a more common type of robot over 4-axis robots (like SCALA, including the "roll" operation and movement through cartesian space). 6-axis robots allow for full operation within the 3D space, and the rotating movements of yaw, pitch, and roll, according to Motion Controls Robotics.com.

Some may choose SCALA and other lesser-axis robots as the most practical solutions for applications such as packaging over large surfaces.

Looking back at YuMi's five years on the market, ABB expects a rapid expansion in the use of collaborative robots in the niche and general industries. It claims that its YuMi collaborative robot boosts efficiency and that its friendly design amplifies a human workforce's output. 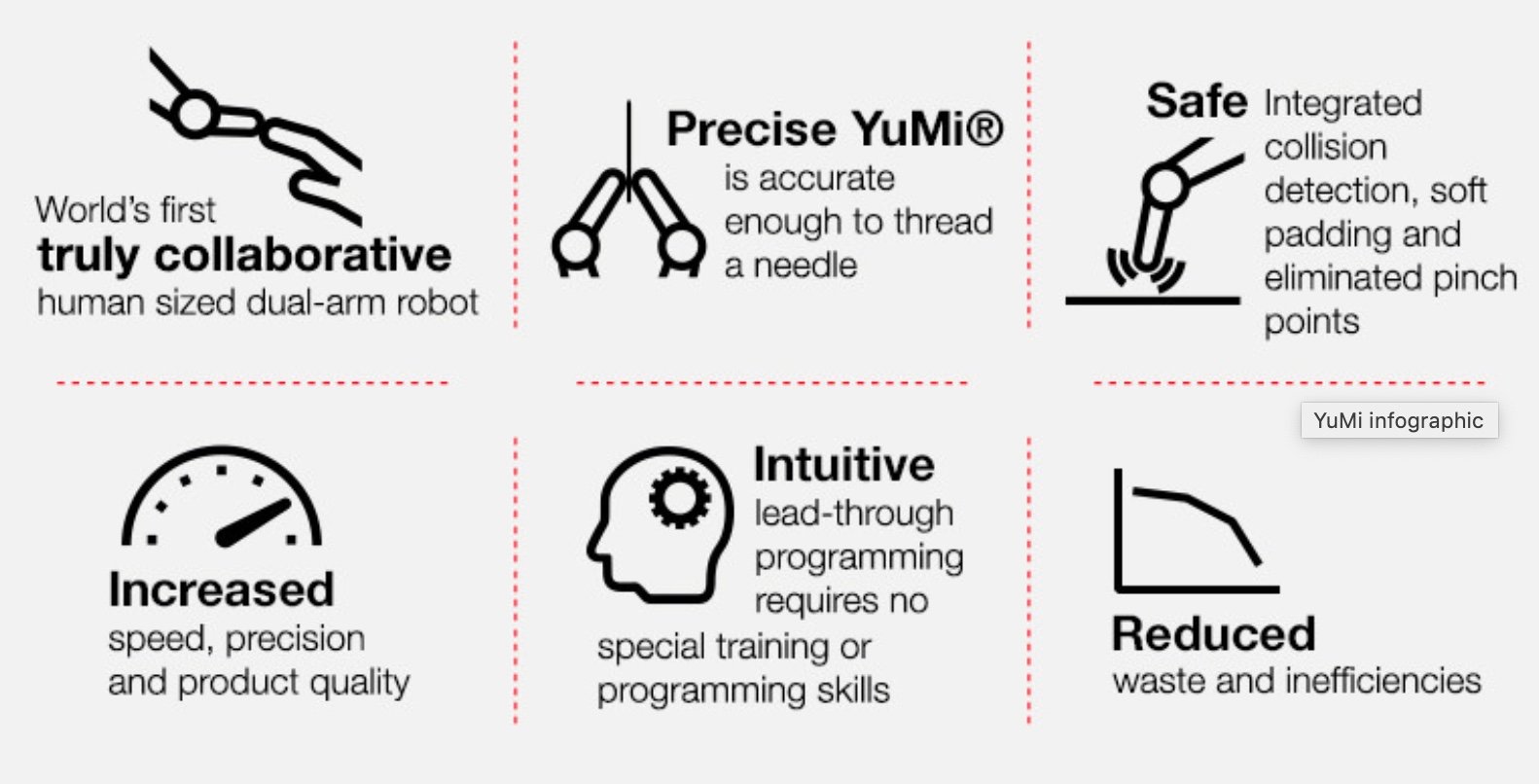 A graphic showing some of YuMi's key features. Image courtesy of ABB.

Today, the robot is heavily employed in pick-and-place operations and small-object transport for electronics and general production and assembly. The creative end pieces, including pincher and suction pieces, are widely used in packaging operations and medical research and pharmaceutical industries.

The new one-armed YuMi focuses on a lower form factor and heightened flexibility and reach.

In addition to a newly added degree of freedom, the single-arm YuMi robot also has a separate and remote motion controller making it smaller and lighter than the previous version. The new robot can be placed on ceilings, walls, and angled surfaces to reach a broader range of applications.

The YuMi robot can also be retrofitted with other programming and machine-learning solutions, such as an artificial vision system, depending on the operation's needs.