The LMP-C602G-SFP-bt(-t)-V2 and the LMX-C602G-SFP(-T)-V2 series switches from Antaira are designed to be powered over the Ethernet and can transmit up to 1 Gbps data transfer for each of four ports, plus two additional Small Form-Factor Pluggable (SFP) ports.

These two additional SFP ports are suitable for copper connections, fiber optic connections, or any other SFP approved device. 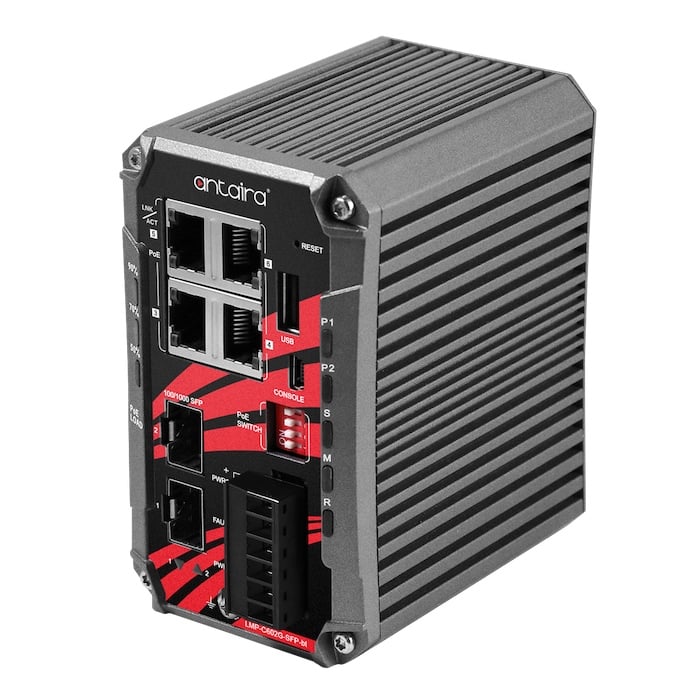 The advantage to PoE systems is that these ethernet switches can be powered using the existing ethernet cable instead of running a separate power line. This saves on initial cost (less wiring), easier troubleshooting (fewer parts), and more mounting options, as they do not have to be located near a 110 V outlet.

The user can decide which ports (if any) are to be powered over the ethernet cable by simply flipping switches in a Dual-Inline Package (DIP) switch assembly, conveniently mounted on the front of the ethernet switch.

The PoE architecture allows the device to be powered over a standard ethernet cable instead of running separate power cables. It is designed with all interfaces on one side of the switch (all ports, DIP switches, grounding screws) to be mounted and accessed much more quickly than if there were fixtures on multiple sides of the switch.

These switches also have a built-in, standard DIN rail mount, making them simple to install in various industrial and manufacturing plants.

These switches are IEEE 802.3bt compliant, meaning they can use up to 90 W per port, and all four pairs of ethernet wires as necessary. With 90 W of available power, these switches can run cameras, radio repeaters, and small pieces of equipment with light heating or water removal capabilities. 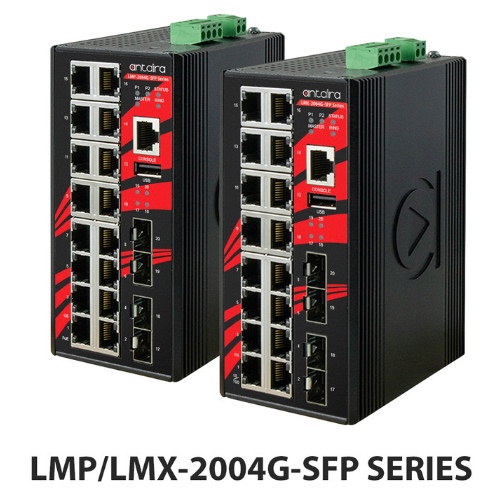 For example, a process monitoring camera in a humid environment may require additional heating or a wiper blade to keep the camera clean and view the process without fogging up and obstructing the view.

As a managed switch, there is more security and control over their usage. The managed switch allows network engineers to decide priority traffic, determine which devices are allowed on the network, and so on.

While it means the device is not plug-and-play, it does increase the security of the system. This can prevent a device that is not compliant with specifications, unapproved, or digitally harmful from compromising the system.

Antaira has been producing industrial networking hardware since 2005 and specializes in ethernet switches, wireless devices, serial devices, and ethernet conversion devices. As part of their company values, all devices produced by Antaira are RoHS compliant, meaning they have little environmental impact and can be used in virtually all countries.

These switches can be utilized in various industrial facilities due to their flexibility of the PoE architecture, 90 W of power available, and IEEE 203.bt compliance.