Across industries, robots in material handling operations, sorting, and manufacturing have become a staple for companies to remain competitive.

As trends in online shopping and consumerism rise, small and medium factories determine how robots can help them meet growing demands. Dematic has centers in over 25 countries to retrofit client warehouses and facilities with automated solutions.

Professionals deploy robotic solutions to drastically increase their clients' output for palletizing, loading and docking, sorting, and other industrial tasks.

The Realtime Robotics RapidPlan processor allows robots to react and replan in microseconds when confronted with unplanned conditions and obstacles.

It receives visual information from the RapidSense intelligent camera. The company's processing technology and hardware are also integrated in self-driving cars, as the company struck a deal with Mitsubishi Electric last year.

According to the U.S. Census Bureau of the Department of Commerce, e-commerce has risen on average year over year since 2011. This means increased pressures for faster packaging and material handling; heightened online shopping also requires more processing and receiving for returns.

While robots can pick up the slack, it can be challenging to integrate them into existing environments. This is especially true when humans run the assembly lines, packaging, sorting, and production tasks.

Without adequate artificial intelligence or sensing technology, robots can injure human workers and may need to be isolated and found in fully programmed environments to be safely deployed.

To increase the flexibility of robots in work environments, Realtime Robotics approaches the money-making questions: How do we make robots productive in unstructured environments? How do we improve robot reactivity so they can work alongside humans and other robots? How do we do all this while maintaining robot speed?

Force and Torque-Sensing for Co-Bots vs. Artificial Intelligence and Processing

As CEO of Dematic Asia Pacific, Michael Jerogin, pointed out in an interview with Supply Chain Asia in 2019, there are significant speed limitations to using force-torque sensing technology in collaborative robots. For robots to use force/torque sensing to detect obstacles and responsively replan movements, they need to move notoriously slow. Their speed cannot be so high to injure humans at threshold force/torque ratings because that would increase the impact of a blow. (Impact = force*speed.) 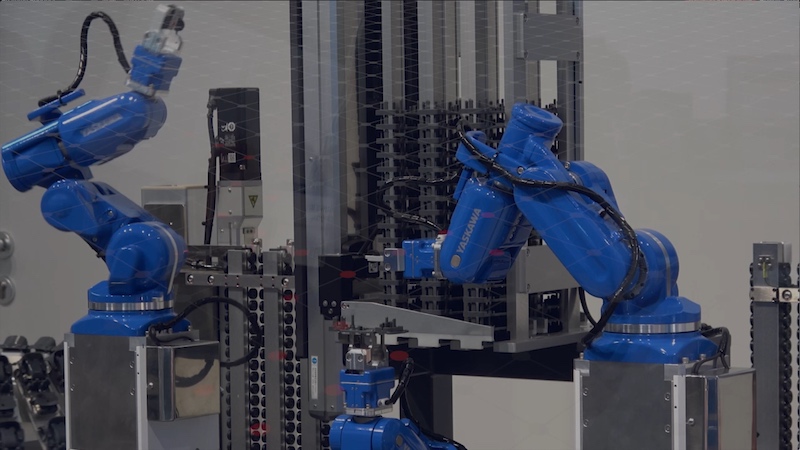 To keep up with the bigger companies and competitors using robots to augment their workforce, Dematic understands that robots will need to move quickly.

Using Realtime Robots' processors, it retrofits factory robots with artificial intelligence and not force-torque sensing to detect unprecedented obstacles and evade collisions in the first place. Dematic hopes to bring fast, responsive robots with spatial perception to its clients by this year, 2021.

The partnership between Dematic and Realtime Robotic will allow robot-to-robot collaboration and faster palletizing among many robots performing pick-and-place operations. Rather than relying on force-torque sensing technology, robots will be equipped with real-time processing and artificial intelligence to detect unprogrammed obstacles before a collision.

They will quickly replan their paths to avoid collision with other robots working with them. RapidPlan processors can be added to existing robotics from multiple manufacturers, and Dematics can offer its expertise in retrofitting equipment to bring those capabilities to its customers.