In a recent press release, Exyn announced that they had achieved Level 4A autonomy, meaning their drones can be flown without human pilots or programmed waypoints. Instead, these drones can explore their environment with no human interaction, plotting their routes according to complex algorithms rather than a pre-programmed flight plan.

Founded in 2014, Exyn Technologies has been a pioneer in drone technology, particularly in Global Positioning System (GPS) denied, low-light and hostile environments. They also specialize in autonomous flight, aiming to produce a drone that can meet objectives autonomously.

They partnered with mining companies, competed in the DARPA Sub-Terranean (Sub-T) challenge, and have even flown their drones through the Smithsonian Air and Space Museum and the Southeastern Pennsylvania Transit System (SEPTA) subway tunnels. 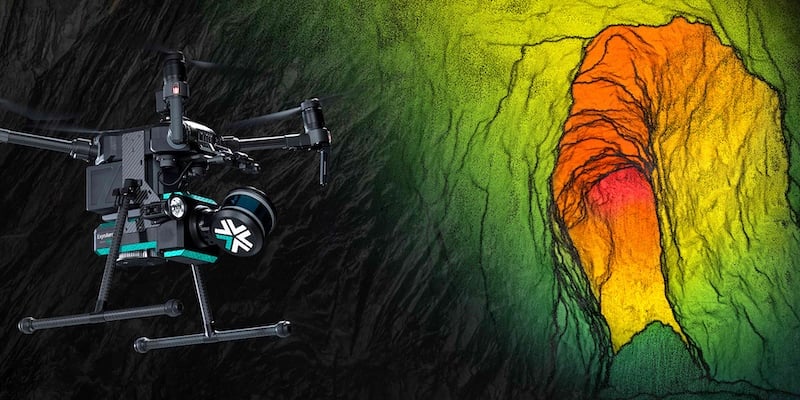 An Exyn drone, mapping out the inside of a cavern while flying in Level 4A Autonomy. Image used courtesy of Exyn Technologies

Level 4A Autonomy may greatly benefit the mining industry, particularly for search and rescue operations.

There are no GPS satellite signals in an underground mine, and wireless networks can be cumbersome and unreliable. Instead, the drone uses light detection and ranging (LiDAR) combined with simultaneous localization and mapping (SLAM) algorithms to search and safely navigate environments where GPS and human interactions would be difficult or impossible.

The Major Levels of Autonomous Flight for Drones

According to Exyn, there are five major levels of autonomous flight for drones. Moving from Level 3 to Level 4 autonomy is a huge step. Level 3 autonomy requires a human pilot to set waypoints and standby to take over the drone at any time.

Level 4 autonomy takes the human out of the equation entirely. The sublevels (4A, 4B, and 4C) concern the level of decision-making performed by the drone. Level 4A senses and navigates around the environment, where 4B begins to identify objects, and 4C takes actions based on those objects to serve a set of objectives. 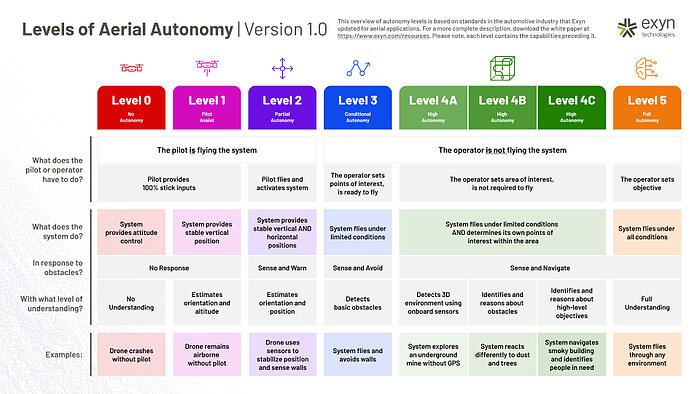 In addition to their autonomy, these drones can map over 16 million cubic meters of volume, or 9 professional football fields, in a single flight. They can fly up to 2 m/s (4.5 mph), nearly twice as fast as competing drones. With this type of data collection, even large, unexplored areas can be quickly searched and mapped.

The Uses for Drones is Rapidly Increasing

Imagine the scenario where there is a collapse in part of an underground mine, where there may be trapped miners. In a mine collapse, the miners will have limited lighting, and should not navigate in the dark, and must wait to be rescued. Drones can help explore a damaged mine, but there are some technical challenges. The chances are that wireless networks will not be reliable if they are functioning in the damaged area. This means the drone would be flying wirelessly with a human operator.

Furthermore, because the whole structure has changed, pre-programmed waypoints may be blocked by fallen rocks or may not search the area where miners have fallen.

This is the real advantage of Level 4A autonomy. A few Exyn drones can be released in the above scenario, and they will map out the area. Should there be a new space, such as a collapsed mine floor, open up, the drone does not have to wait for input from a human operator. Instead, it can begin exploring the new space, mapping out the area, and making decisions independently.

In the future, these drones may be used in various search and rescue operations, from mine collapses to buildings damaged during earthquakes.

Exyn’s next steps will be to move through Levels 4B, 4C, and 5, where a drone can serve an objective, perhaps identifying trapped people in a mine and delivering supplies or medical assistance to them until they can be rescued.