Potential Applications and Challenges for Blockchain in Industrial Automation

Potential Applications and Challenges for Blockchain in Industrial Automation

The previous article explained how blockchain works, why it’s secure, and introduced using blockchain for logistics, such as the supply chain and asset tracking. In this article, we will continue to provide examples and potential applications for blockchain in industrial automation.

The Internet of Things (IoT) has millions of applications worldwide but simultaneously has exposed many security risks. We often hear from the news that malicious actors hacked IoT products such as wireless cameras, Amazon Alexa, and smart thermostats and stole data.

Blockchain can help to close the gap on the security deficiency for IoT applications. Many IoT applications use MQTT for communication. MQTT can be secured by introducing blockchain-based OTP (one-time-password) authentication into its schema. 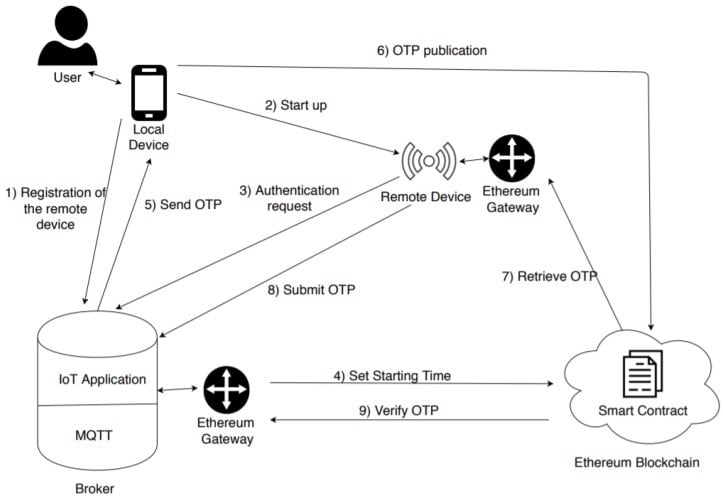 Another method to secure access control to the IoT devices and their data is using blockchain to store the device list and transactions. The blockchain can be designed on an Ethereum platform using Truffle Suite. Truffle Suite is a tool used to create smart contracts using Ethereum Virtual Machine (EVM). It creates a record-tracking and immutable database for authentication purposes and to keep transactions secure. The data in the immutable database cannot be deleted or updated.

A blockchain-based vertical integration architecture for a process automation system (PAS) can control and monitor an industrial process. A vertical integration collects data at the lowest field and device level and enables the information to travel to the highest level. And vice versa, from the highest level to the field devices such as changing setpoints for control loops.

Decentralized blockchain-based network architecture can be implemented in the vertical integration of PAS hierarchy levels, which works in parallel with the real-time system. This introduces the blockchain into the task orders such as compilation, execution, and monitoring, performed by the operator at the human-machine interface (HMI) level.

As shown in figure 2, the blockchain network is used as a middleware to connect the corporate management, plant management, and supervision levels, where each level is acting as a blockchain client and interacting with each other in a decentralized manner.

Process control level devices arbitrate communication between field devices and sensors through the programmable logic controller (PLC). It also communicates with the three levels of the PAS through smart contracts that define task execution and raw data collection, and perform access control and security management. The information can support business and manufacturing decision-making. 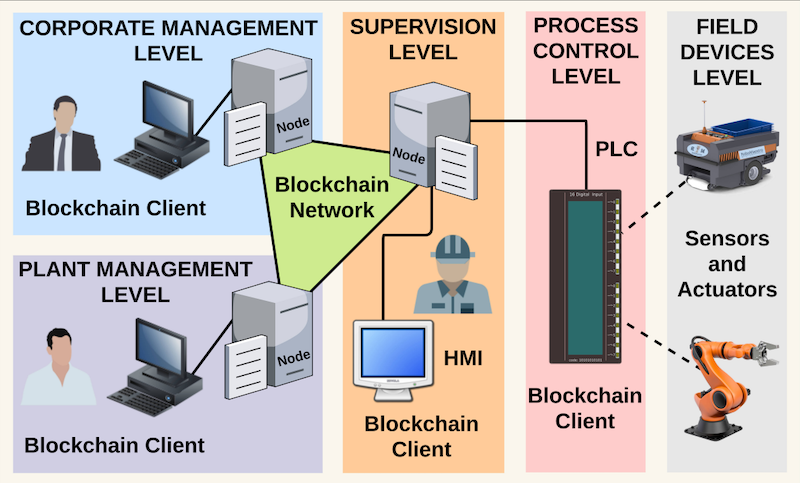 In this architecture, the PLC device management and control information are stored in the ledgers in the blockchain network where transactions are validated. Each transaction is identified by a unique address and stores all relevant information to be exchanged among different levels in the PAS.

The Challenge Ahead with Blockchain

Even with the success of blockchain-based networks in cryptocurrency, blockchain cannot be copied and pasted into other industrial applications. Below are some of the challenges that need to be considered by blockchain developers for successfully integrating blockchain into industrial automation and manufacturing applications.

Even though there seems to be some challenges with blockchain, the good news is there is a lot of work in progress to combat these deficiencies. Organizations and technology leaders have recognized the benefits and potentials of blockchain, and they are investing in this technology. As with other new technologies, there will be time for blockchain to face a rigorous challenge before it becomes a mainstream adoption.

Only time can tell if cryptocurrency is a boom or bust. But the blockchain technology that it helps create will hold its value for a long time to come in the industrial application arena.