Festo has recently announced a new product, the first pneumatic collaborative robot, with the hopes of bringing automation to a wider range of customers and application scenarios.

Festo has recently announced a new product with the hopes of bringing automation to a wider range of customers and application scenarios – a pneumatic cobot. This new cobot is the first of its kind, and looks to create better value for less upfront investment, a common prohibition for small-scale automation. Its lightweight construction comes as a product of its pneumatic construction. The cobot market is projected to grow in the upcoming years and will help to improve working conditions for employees as cobots take over repetitive tasks. Festo has worked toward creating a system that is capable of providing a sensitive and flexible approach to human-robot collaboration.

Festo has, for many years, invested considerable effort into bolstering the company's expertise in controlled pneumatics. As a result, they have managed to create a lightweight, inexpensive solution for designing and building cobots. They hope to bring the technology to smaller companies which often have a hard time investing in automated systems because of prohibitive initial costs. Festo has worked to make the cobot easily adaptable to different tasks, so smaller companies can spread the investment to different tasks within their plant processes. 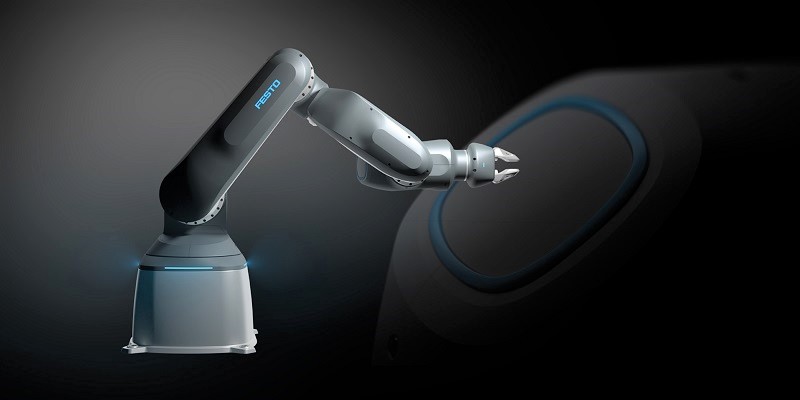 Pneumatics help to reduce weight in robotic arms by eliminating heavy gearboxes within the arm joints. By nature, pneumatically powered motors have internal cavities instead of the heavy coils present in electric motors, further underlining the weight reduction. Costs are also reduced because force-torque sensors are unnecessary in pneumatic cobots since they use direct drive units for movement. The systems are cheaper than many comparable electronic counterparts and provide a great opportunity for integration into certain tasks. These cobots work well in handling operations of small parts with a payload of 3 kgs or less.

The pneumatic cobot contains features for superior flexibility in plant processes because it does not contain a separate control box. The control unit for the Festo cobot is built directly into the base of the cobot. Without an external control box, a significant amount of space is saved and the arm is much easier to move from job to job, as demands require. All necessary connection interfaces for the cobot are also integrated right into the base of the robot. Common bus connections are used to make the robot easier to assemble and disassemble from its end of arm tools. In addition, the controller has common connection points for higher-order controllers.

The current pneumatic cobot model has an arm length of 670 mm to mimic that of the human arm. The system has also been designed to be easily programmable with its intuitive user interface.

Since the robot is lighter than its electrical counterparts, the contact force created in the event of a collision is greatly reduced and safer for collaborative work alongside workers. Christian Tarragona, Head of Robotics at Festo explains: "Thanks to precise pressure regulators in the articulated joints, the robot recognises when it is being touched and responds with appropriate safety functions." 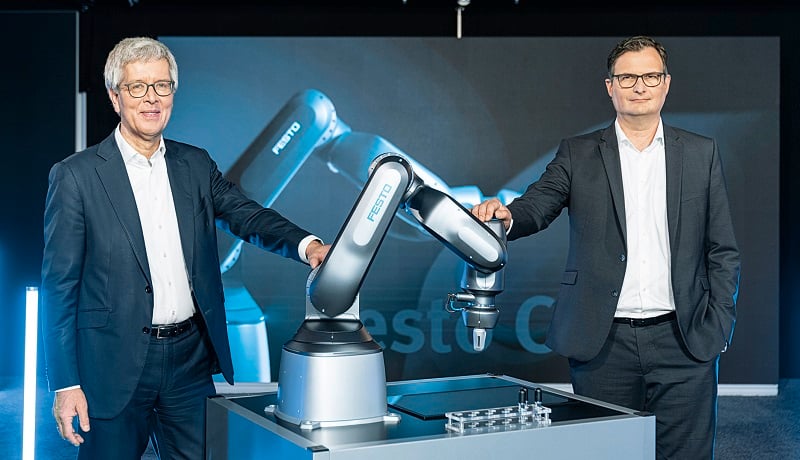 The Festo cobot is shown in comparison to a human arm, designed to be similar in length and dexterity. Image used courtesy of Festo

Festo is an independent, family-owned company with headquarters in Esslingen am Neckar, Germany. They are a global player in automation technology. The company has worked in over 176 different countries, with over 300,000 customers worldwide, spanning 35 different industries. With a wide range of products in pneumatic and electronic automation, their focus is to maintain sustainable development for society, the economy, and the environment.

Looking Ahead at Cobot Technology

Cobots show promise for helping to improve working conditions for many factory workers. The addition of cobots can help to move workers from their repetitive jobs into more fulfilling jobs within the factory. Festo is hoping to bring cobots to a broader range of customers who may be priced out of more expensive electronic cobots. It will be interesting to see how the future of pneumatic arms changes the course of cobot technology.