This motor is the latest in the Parker Hannifin Global Vehicle Motor (GVM) line. It can be used in conjunction with Parker hydraulic pumps to provide more power solutions for transportation and construction applications. 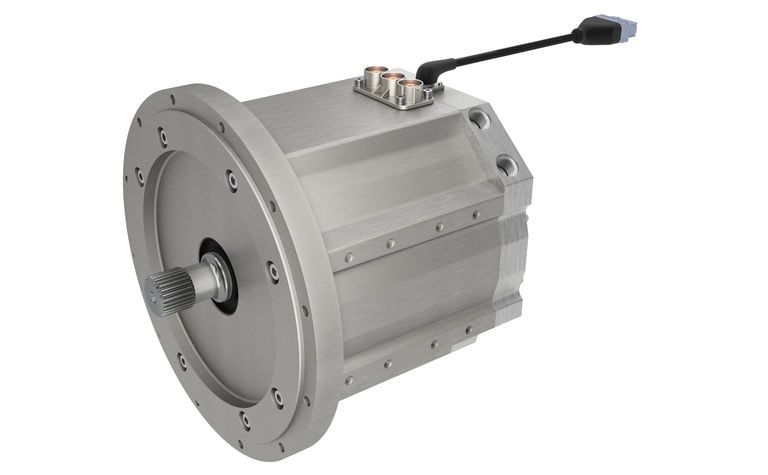 Permanent Magnetic Alternating Current (PMAC) motors are replacing traditional AC induction motors in many applications. They use powerful, rare earth permanent magnets instead of requiring an induced current in the rotor.

This means PMAC motors require less electrical energy to run, and that is a major advantage on vehicle systems requiring motors to run from a battery. Furthermore, the rare earth magnets are powerful enough to allow the same motor output from a lighter, more compact package.

While PMAC motors are nothing new, they are continually improving. The GVM-310 takes advantage of several of these improvements.

The GVM-310 motors are targeted for the transportation, construction, and mining industries. In these applications, traditional motive power (either for vehicle movement, raising bulldozer blades, backhoe shovels, haul truck lifts, etc.) comes from either electrical or hydraulic power. A diesel engine supplies power to a generator for electrical power or a hydraulic pump for hydraulic power. Each system has advantages and disadvantages.

Electric motors can combine with hydraulic pumps, which allows for complete motion solutions tailoring. Some applications, such as large vehicle motion, are inefficient with only one system. Instead, the GVM-310 and the Parker Hannifin hydraulic pumps can be used together, and the control system can determine the proper power source for any application.

More Features of The GVM-310

However, once the vehicle is moving, additional electrical energy is not required at the same rate. Momentum keeps the part moving, with only occasional sustaining bursts of electrical energy from the battery.

During times where there is plenty of momentum—and requires little load from the battery—the momentum turns the motor, turning it into an electrical generator to charge the battery.

Parker Hannifin envisions these motors used in city buses, as well as light construction and mining vehicles. They are available as a low flux model for high-speed applications, or high flux for low-speed applications.