Researchers have developed a novel, flexible robotic gripper that can be used to pick up differently-shaped objects.

Chinese researchers have created a gripper mechanism based on the naturally-occurring mechanics of the sea anemone. How is such a gripper beneficial to control processors and are there any other examples of “soft” grippers?

A Delicate Problem: Why We Design Robotic Grippers Like Human Hands

When it comes to production lines, the use of automation can dramatically increase productivity with processes flawlessly working together while control stations carefully monitor each stage. While many processes such as box sealing and material cutting can be automated with relative ease these days, other processes are not so straightforward. One example of a process that can be hard to automate is item picking whereby an arm grabs an item and moves it to another location.

But why is grabbing items so difficult to do? The human hand is incredibly dextrous and can be used to grab almost any item with ease. In one moment, a hand can pick up a very heavy hammer but, in the next moment, it can be used to pick up an egg. The reason why human hands are so capable comes down to two factors; their mechanical design and sensory capabilities.

The human hand has four fingers and an opposable thumb which allows them to pick up almost any shape of object while the sensitivity of the nerves in the fingers allows for accurate pressure measurement. In fact, the nerves in a human finger are so sensitive that they can detect features on a piece of material just 13nm in height.

Robotic systems, however, cannot incorporate this level of sensitivity, which is why many early demonstrations of robotic systems would either drop items or hold them too tightly.

However, due to the repeatability of computational devices, robotic arms and grabbers can be specifically programmed to pick up one specific item. This has led to many robotics manufacturers to offer multiple attachments and grippers that can be placed at the end of an articulated robotic arm to make the robot more flexible in nature. This also often requires software changes to allow for optimal grip strength and motion planning.

But what if there was a truly multipurpose picking gripper that didn't need to be changed out between tasks?

Inspiration from the Sea Anemone

In an attempt to solve this item picking issue, scientists in China have created a specialized gripper that works in a similar fashion to the sea anemone. Instead of using actuators and levers, the sea anemone has a skin shaped like a torus where pulling the inside of the torus upward causes the other side to contract as the skin is folded over.

The scientists, who hail from Tsinghua University and the Southwest University of Science and Technology, replicated this behavior and created a rubber-like gripper.

A schematic of the torus design based on a sea anemone. Image used courtesy of the Southwest University of Science and Technology and Tsinghua University via Applied Physics Letters1

Their prototype is able to grab a wide range of different items, including:

The gripper picking up various objects. Image used courtesy of the Southwest University of Science and Technology and Tsinghua University via Applied Physics Letters1

What makes this design impressive is that not only can the gripper handle many different items but no settings are required to be changed when moving from one item to the next. There are plans to produce a nanoscale gripper to move and manipulate individual cells.

Other Soft Robotics Based on Undersea Life

While the research team is one of the first to produce a torus-like gripper, they are not the first to recognize the importance of soft materials in grippers. In fact, many research institutions have been inspired by nature under the sea for years, though many of those focus on mimicking the flexibility of the octopus.

One example company, called Soft Robotics, has produced a single robotic gripper that can be used to handle thousands of items without the need for reprogramming or complex sensors. The rubber gripper is based on pneumatics; as the internal pressure is changed, different actions can be performed including bending, extension, and actuation. The result is a gripper that looks similar to an octopus and has the ability to grab many different items with no need for code or hardware changes when picking up different items. 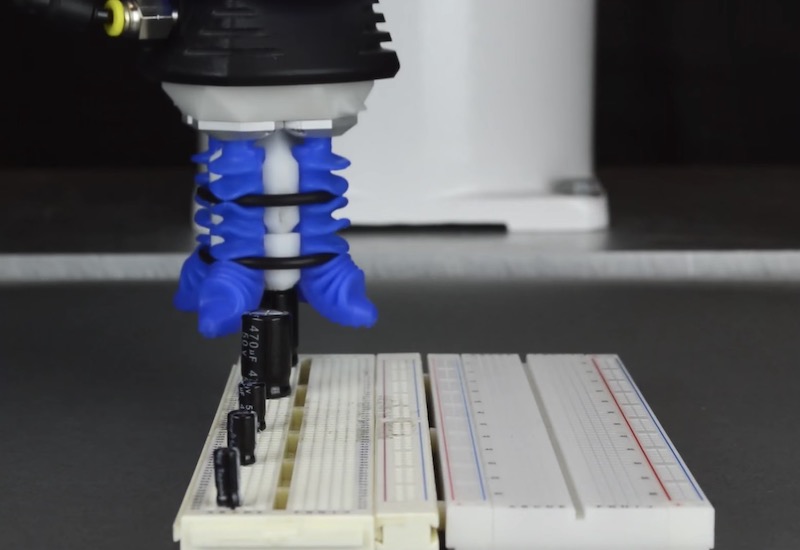 Another bonus to the gripping system is that traditional robotic grippers require precise measurement during operation whereas the soft robotics gripper only needs to be close enough to the item to grab it (i.e., the grabbing action pulls the item in). Now that Soft Robotics products have been used in the industry, they have been able to raise another $23 million to continue developing gripping solutions.

Sometimes the simplest solution is the best. When it comes to automating the movement of delicate items, soft robotics is a clear path forward. While not all applications benefit from such a system (such as those which are incredibly heavy or require precise control), typical production lines will benefit from systems that are easier to install, program, and operate.

The research was produced by