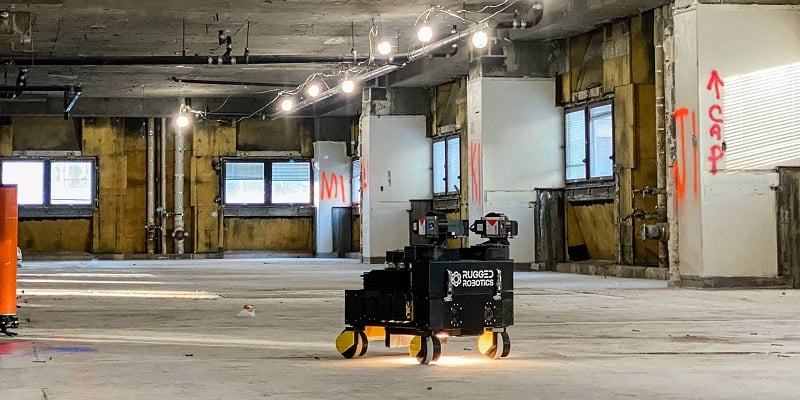 RR in its Early Stages

In construction, the transition from foundation to vertical assembly begins by interpreting construction plans and marking the location of proposed new structures such as walls, doorways, slab edges, elevator openings, structural columns, stairs, and all the other internal structures. At this marking and layout stage, human errors may creep in through measurement or misinterpretation of the prints. This could cause delays in finishing projects through rebuilding and increase costs with the need for additional replacement materials and time.

To reduce the likelihood of human error and to enhance the speed of the layout process for contractors in the construction industry, RR developed a layout-printing construction robot, the Mark 1. In 2019, the company initially raised a $2.5 million Seed round for the development of its technology. Rugged Robotics then set out to deploy its technology in early pilots. The Massachusetts-based construction firm, Consigli Construction Co., Inc., was one of RR’s early customers, along with Suffolk Construction, and Brasfield & Gorrie. 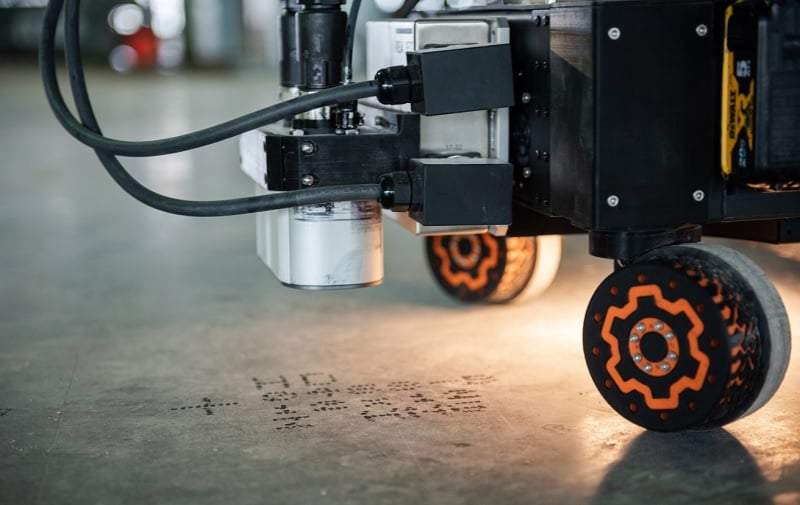 One major advantage of autonomous floor marking is additional information for workers, usually too time-consuming for manual floor drawing, so time must be spent referencing original drawings. Image used courtesy of Rugged Robotics

In a news release from last month, the Vice President (VP) and Head of Operations at Consigli, Mike Haseltine, commented, “When Derrick and Logan first visited our office, they clearly understood the problems we face and immediately separated themselves from typical technology startups. Their focus on solving real-world problems resonates with us, and we jumped at the opportunity to engage with them.” Haseltine emphasized his impression at the realization these robots would have a lasting impact on how future construction projects are managed.

Following the 2019 funding round, the coronavirus pandemic was starting to take hold, which halted the progress of many companies across the globe. The construction industry was hit hard, bringing projects delays, cancellations, layoffs and furloughs, shortages in labor, and difficulty in sourcing materials. According to a workforce survey conducted by the Associated General Contractors of America (AGC), sixty percent of firms reported cancellation of future projects or delays to projects. Demand for skilled labor remained high with 52% of firms struggling to source workers. Although automation is currently unable to replace all elements of the construction industry, robotic solutions may be deployed in some of these more error-prone and understaffed segments of the project.

Rugged Robotics’ Mark 1 robot provides a no-contact solution for workers concerned about the coronavirus and it allows contractors to execute layouts of construction projects without the consequence of human errors and long hours of manual labor. In partnership with Consigli, RR successfully used its bot to deliver a multi-trade layout on six floors covering more than 240,000 square feet at Cambridge Crossing – Parcel H. At the Parcel H site, Consigli is building the new headquarters for Sanofi life science.

To date, RR has procured $12 million in funds and plans to use its newly procured capital to scale up its operations, expand its offerings, tackle new construction challenges, and continue its research and development into other products. The company also aims to simplify the deployment of its technology and eventually unlock unmanned, overnight work which is already very common in manufacturing and production industries. In addition to newly raised funds, RR has added Mason Markee to its team. Markee previously held the position of Director of Mechanical Engineering of Auris Health.