Universal Robots releases their largest cobot, the UR20, capable of handling up to 20 kg of payload. The UR20 is not only bigger than previous UR cobots but has a faster cycle time and greater motion capabilities.

In front of a captivated audience at the 2022 Automatica trade show in Munich, Germany, Universal Robots unveiled their newest and biggest collaborative robot, the UR20. The UR20 has a variety of industrial and commercial uses, from welding and machine tending to palletizing and depalletizing material or products.

Universal Robots has been developing robots for a wide range of businesses and applications since 2005. In 2008, they created the world’s first cobot, emphasizing the safety of working around robots in the manufacturing facility instead of hiding them behind cages. 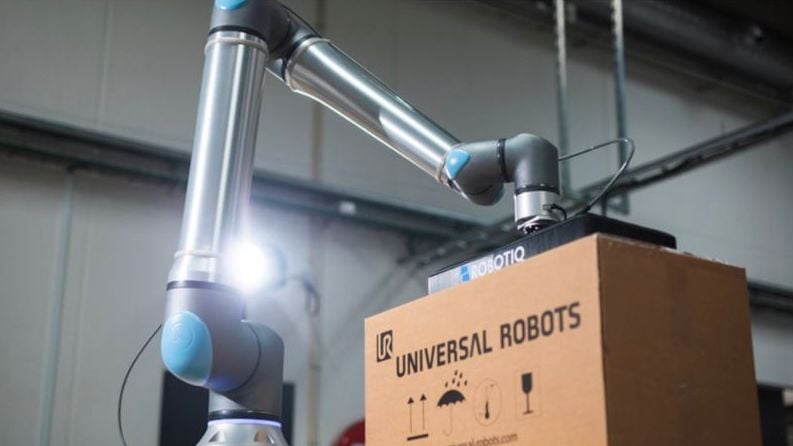 The UR20 is the largest cobot offered by Universal Robots, with a 20 kg payload capability and a 1750 mm reach. Universal Robots president, President Kim Povlsen, however, does not want the UR20’s impressive size to distract from its other capabilities. In a recent press release, he added, “This is not just a bigger version of our existing cobots; it’s the cobot redefined.”

What sets UR20 apart from previous UR cobots? For starters, the arm is completely reengineered to handle heavier loads with a proportionally smaller footprint. By doing so, its cycle time is faster than previous UR cobots. Furthermore, the software enhancements have increased the motion capabilities of the arm, making it more versatile.

Cobots are meant to share spaces with workers and technicians. Instead of being mounted behind protective cages, cobots may help hand materials to workers or hold parts for humans to inspect. As such, the UR20 must be capable of working safely in an environment that will have workers moving about.

To perform these operations safely, the UR20 and all other Universal Robots’ cobots are considered power and force limiting (PFL). This is in compliance with several international safety standards, such as EN ISO 13849-1,Cat. 3 PLd, and ISO 10218-1byTÜV Nord. Cobot programming includes 17 separate speed and time related stopping mechanisms as well.

With any cobot, a risk assessment must be conducted to ensure the safety of workers near the cobot. The UR20 makes this process easier given their PFL approach to cobot design. Universal Robots also made the UR20 compatible with safety systems that were used on their popular e-Series robots, making the safety system more versatile and integration much less complicated.

Universal Robots says that the UR20 will be available for ordering in late Q4 2022, with shipments beginning in Q2 2023. The complete package will include UR20 arm, control box, all necessary cabling, documentation, and a teach pendant with an integrated 3-position enabling device (3PE TP). It is capable of running on the current version of PolyScope, reducing the time required to program and train the UR20.