What Is Vertical Farming? A Look Into Airflow and Lighting Automation in Agriculture

What Is Vertical Farming? A Look Into Airflow and Lighting Automation in Agriculture

The vertical farming industry has been gaining popularity in the last several years. Here are some ways to automate lighting and airflow processes in this application.

The vertical farming industry has grown immensely in the last several years and this growth has brought an increased demand for automation. This article discusses several tools you can use to automate your light and airflow systems.

What Is Vertical Farming?

Vertical farming is the agricultural process of growing food in vertical layers. These layers are stacked in rows with produce and grown in a controlled environment to optimize plant growth.

This concept uses up to 95% less water than traditional farming methods and no soil, creating a large number of environmental benefits. These farms are popping up in cities all over the world, ultimately bringing more fresh produce to urban areas. According to experts from the U.S. Department of Agriculture, producing fresh produce in urban populations could help meet growing global food demands by, “reducing distribution chains to offer lower emissions, providing higher-nutrient produce, and drastically reducing water usage and runoff.”

All vertical farms use either hydroponic, aeroponic, or aquaponic systems to achieve a soil-free environment.

Automation has been used in traditional farming practices for many years. This has increased productivity and crop quality significantly. The vertical farming industry had pitfalls until automation was introduced in these systems. While many assume automation is primarily used in the industrial space, it's also utilized in up-coming applications such as robotics in retail.

Now automation is driving the vertical farming industry to higher production rates and overall success. What are some ways you can automate your vertical farm?

All vertical farms require some sort of light for products to grow. LED lights are used to create a specific light formula for each plant, delivering the exact intensity, range, and frequency the plants require for photosynthesis. LEDs used in this industry offer many benefits including saving energy, water conversation and increased growth rates of products. Cree, Inc. develops a variety of LED lights used in vertical farming. On their website, Cree mentions that they create specific conditions for each plant with a uniform growth process that increases the value of the crops while also lowering the risk for inconsistencies and crop loss.

The use and production of LEDs in automated systems are growing rapidly according to Lumileds LLC, a company that specializes in global lighting solutions. The company has engineered LEDs such as the Luxeon SunPlus Series, to deliver precise wavelengths of light needed to improve crop yield. This series includes the option for single driver solutions, multi-channel, color turnable solutions. While companies like Lumileds are focused on the function of the lights, other companies are focusing on the lifespan.

Valoya OY, a Finland based industry leader in indoor LED grow lights, has been focusing on longer-lasting lights for facilities. According to their webpage on vertical farming, “Valoya’s products are designed to have a long use life, typically rated at 90% of initial output at 35,000 hours”, which in most cases leads to a productive life of seven years or more. The average LED light lifespan can range from three to six years. These bulbs have played a crucial role in the process creating less overall downtime.

LumiGrow Inc. is another company that specializes in LED grow lights and wireless grow light software solutions. In the last few years, they have developed smartPAR, a light sensor module that allows you to control your daily light integral (DLI) through the smartPAR app. This allows you access to reports and data that you can use to adjust your lighting system from your smartphone.

These are just a few of the companies that are taking strides to increase automation in lighting systems. There are a variety of other ways to automate your lighting systems as well such as implementing technology that mimics weather patterns. Having the proper lighting system is crucial, as it directly affects the quality of airflow. Airflow is affected by light placement, heat, and other aspects. Similar to lights, airflow can also be automated in these systems.

Benefits to Automating Airflow in Your Vertical Farm

Many think that indoor facilities are immune to the challenges that face outdoor farms in terms of pests, bacteria, rot, and mold, however, indoor facilities are just as much at risk for crop-killers as traditional agricultural practices. Airflow allows CO2 to spread through the farming facility, which reduces humidity and supports plant growth. Without constant airflow, significant growth would be next to impossible.

As air moves through the tightly packed racks it collects heat from the lights, causing air to become hot and humid, which can create mold and mildew in plants. There are several different ways to automate airflow in a vertical farming system.

Kanomax USA, a company that specializes in instrumentation and measurement technology, has developed an airflow transducer, that can measure airflow 24/7. As stated on Kanomax’s web page “Monitoring Airflow in Indoor Farms with Kanomax Products”, “The instruments measure air velocity with hotwire technology, meaning that the speed of the moving air is translated by the time it takes for the inner mechanism to cool.” One model of this transducer displays the measurement digitally, so users can make quick decisions as needed to maintain crop quality. With 24/7 monitoring, this leaves room to focus on other aspects of your vertical farm and minimize inefficiencies. 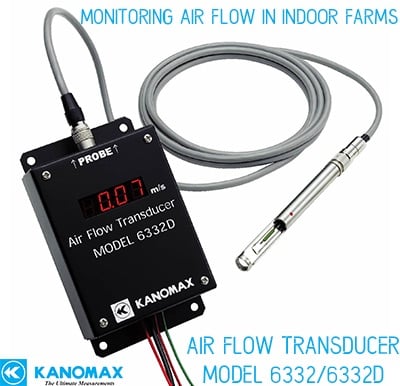 Since this method of farming requires vertical stacks, there can be issues with airflow and overall plant production the higher the stacks are. ZipGrow Inc., a company that designs and builds vertical farming technology, has been working to identify the importance of proper layout of your farm is to achieve optimal airflow. ZipGrow mentions on their website that an efficient farm layout should help facilitate airflow, not work against it.

No matter how you are using vertical farming, there is a high demand for automating these systems and those who are making the switch are seeing a benefit in terms of accuracy and ability to increase quality and consistency among products.

What are some other systems that benefit from automation in the vertical farming process? Do you use any of these tools to automate different systems in your industry?