Alarm and Event Handling and Processing in Process Control Systems

Alarm and Event Handling and Processing in Process Control Systems

Events that cause alarms are not the most common events in a process system, but they must be handled with proper care, being both resolved and recorded in order to prevent hazards and downtime.

The critical data from power systems is monitored by inspecting the collected and calculated values to confirm that these process values and states lie within permissible limits. Violation of limit values and indications are defined as ‘events’ resulting in event processing in the SCADA system.

Events and alarms are generated as a result of changes detected in the status of power system objects, as well as in computer control systems with RTUs/PLCs, front-end servers, workstations, and networks.

Monitoring functions are included in nearly every SCADA control system, like status change reported from RTU/PLC (usually called data acquisition) and monitoring of status change in response to control operation, like device control of a circuit breaker.

Each collected and calculated indication value is compared with the previous value stored in the real-time database. The new state of indication can be monitored and compared with the present normal value and generate a normal/non-normal operation status of the device, which could be used for presentation in the event list. Likewise, analog values include limit values for monitoring alarm/warning limits. 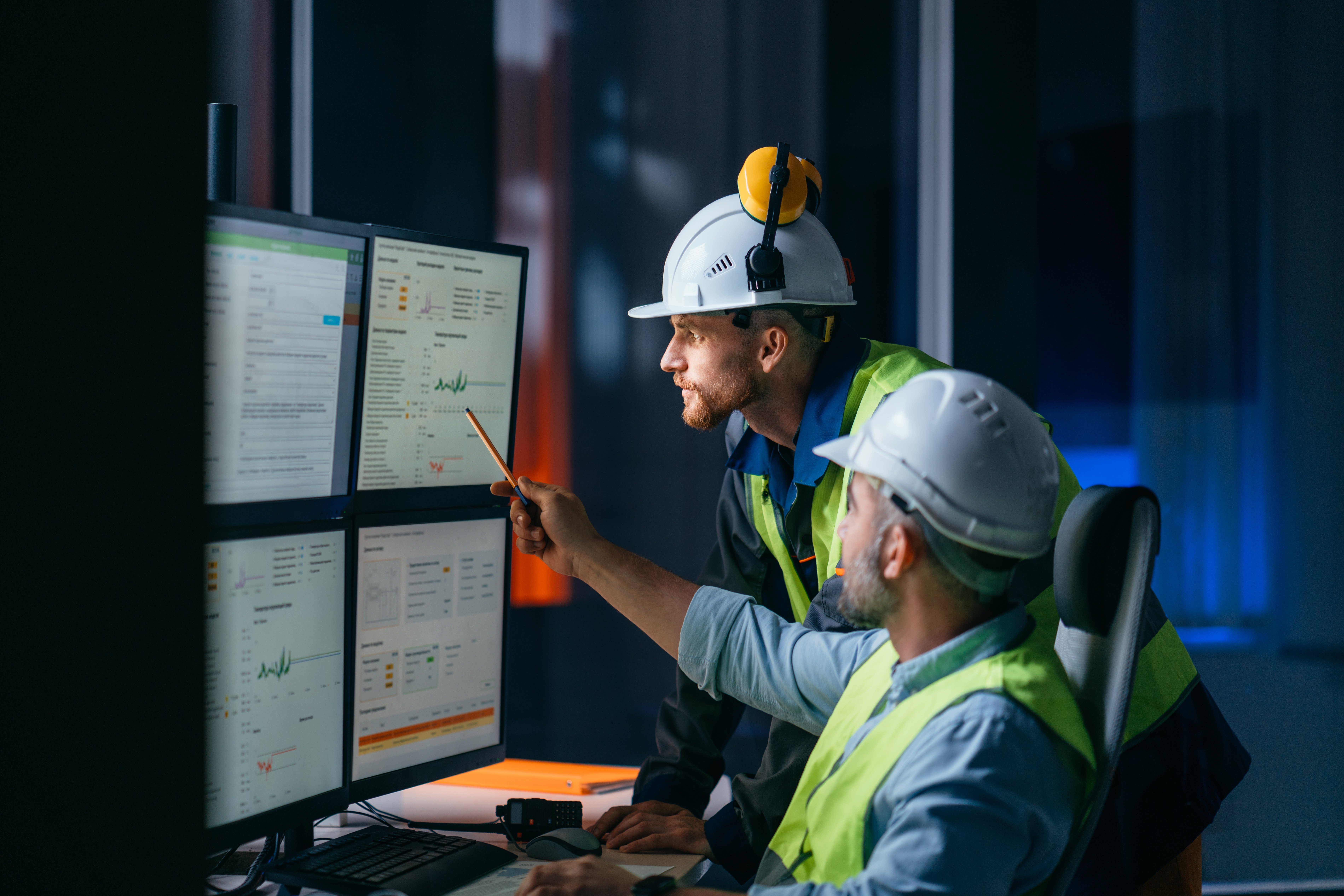 Figure 1. Events and alarms are generated as a result of changes detected in the status of power system objects, as well as in computer control systems with RTUs/PLCs, front-end servers, workstations, and networks. Image used courtesy of leonidkos

The standard event processing functions contain functions for the following:

An event in the SCADA system is defined as any change in the detected state of power or control system. That change may be caused by a system response change in the process or in the SCADA system itself, or it may be caused by operator actions. Event presentations always give a detailed and selected view of the event status of the power system. Event processing functions maintain the event lists and alarm lists. The event lists are a historical record of the events while the alarm lists are just the current alarm status of objects.

In general, any SCADA system can perform several tasks for event processing: 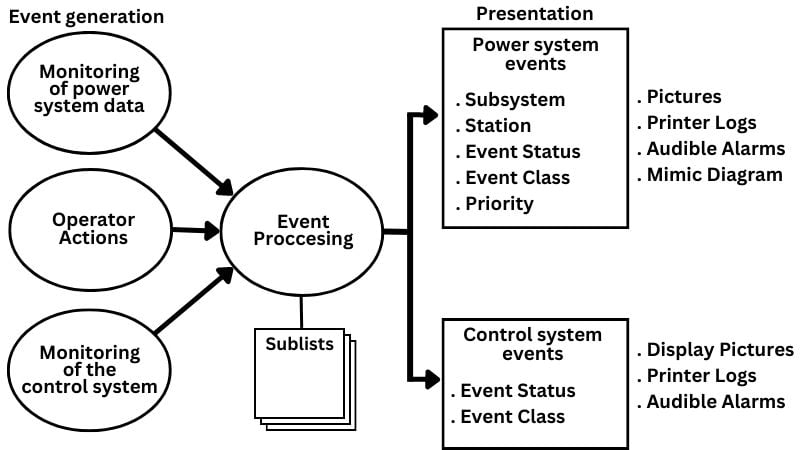 Event processing functions maintain an event list and an alarm list, which are further subdivided into the following event sublists:

The multiple lists presented to the operator are all extracted from these internal sublists. The key concept that is necessary to understand is that the event processing for an object involves the event processing group parameters and object subsystem identification to determine the particular sublist to update. The event sublist is designed to wrap around the list, meaning that more recent events always replace the oldest event in the sublist.

Events are classified with respect to the following parameters:

Events are associated with objects, perhaps an analog value, generator, transformer, RTU, etc. and are assigned to one or more levels of the system hierarchy. The breakdown of the system, subsystem, and stations is primarily intended for display hierarchy, list presentation, and authority control. It can also be used as a sorting criterion for event reports and status lists, as well as summary alarm indication for presentation. The subsystem identity is used for further subdivision of the process and control system.

The event processing functions analyze the events and assign one or more statuses to the event. Each status reflects the way the event is presented to the operator. The event presentation possibilities are identified as:

The event is also assigned a unique class that is used to construct the message and the event clause parameter and for sorting the presentation into priority order. The event class consists of four independent parameters:

Data type is the concept from the database point of view and data is determined for which the events belong like indications, measured and setpoint values, and control system devices. Standard data types include:

Point class refers to a group of objects based on the type of device and position in the process. Examples of point classes are breakers, isolators, transformer fault signals, high voltage active power readings, etc.

The reason code is utilized for the classification of the event with respect to its cause. Examples of reason codes are spontaneous events, control responses, etc.

Each event is given a certain priority based on the point class and cause of the event. Each combination of these two can be given priority. 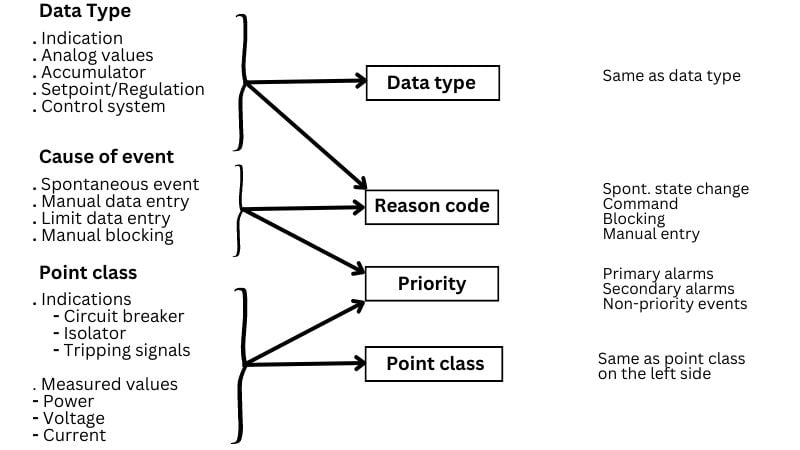 An alarm group constitutes the processing to be performed when an analog value crosses a limit, when an indicator changes its status, or when an accumulator increment crosses a limit. Several kinds of treatment can be stated for an alarm group, such as persistent alarm, audible alarm, log-on printer, etc. The alarm list is structured according to the same principles as the event list.

While the event list is a continuous record of all events, the messages in an alarm sublist reflect the current alarm status of objects. Messages with different alarm statuses are distinguished by means of color and symbol.

There are mainly two types of alarms, momentary or persistent.

These alarms remain in the alarm list and are related to those objects for which a normal state or condition has been defined and the alarm condition occurs as the result of the transition of the object (value or state) to the abnormal condition.

Contrary to persistent alarms, which remain in the alarm list until the indication or analog value returns to its normal status/value, momentary alarms are removed from the alarm list when acknowledged by the operator. Some alarms could be configured to remain in the system until an operator deletes them.

Events that cause alarms are not the most common events in a process system, but they must be handled with proper care, being both resolved and recorded in order to prevent hazards and downtime.