This article will look at key factors in successful innovation centers and how they affect manufacturing. What resources are opening the door for the future of manufacturing?

A previous article looked at how innovation happens, starting with the first university-owned industrial park at Stanford. While this was back in the 1930s, according to an article published by Brookings, between 2005 to 2017, four out of five West coast cities, two of which are near Stanford, were responsible for more than 90% of the nation’s innovation-sector growth.

This success was not due to one collaborative park, but rather many collaborative partnerships that created innovation concentrations. This article will look at key factors in successful centers for innovation and advanced development and manufacturing.

The previous article about innovation centers mentioned Wichita State University’s (WSU) Innovation Campus becoming home to companies such as Dassault Systemes and Airbus. These partnerships on a single campus increase the chances for funding.

One thing funders look for is which applicant may yield the greatest success or result. If you are part of a large partnership with access to labs, equipment, and experts, your chances of obtaining funding are greatly increased.

Creating relationships can be like a puzzle. Each piece is necessary to complete the big picture. A group must present these pieces and how they fit together to solve problems to obtain funding. For example, WSU formed an early partnership with the Economic Development Administration (EDA).

By partnering educators, employers, and technology providers to focus on pain points, such as the next generation of workforce development and advanced automation, the EDA invested $10 million into the Universities Innovation Campus.

Partnerships and funding have provided WSU to attract technology providers such as Dassault Systemes. The 3DS building on the university's innovation center has advanced labs for manufacturing robotics, additive manufacturing, and a computer-aided virtual environment (CAVE). These resources open the door for companies to use these spaces to innovate and capture grants.

In another example, Columbus, Ohio, won a $40 million DoT grant by combining local resources and working with other stakeholders to pitch in even more than the grant was offering, about $140 million. 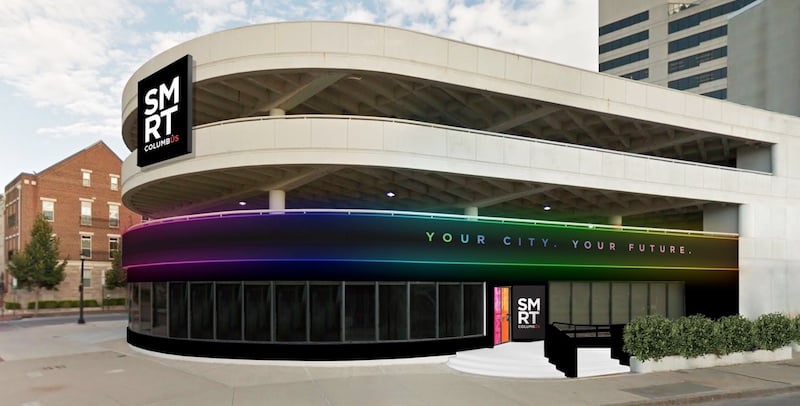 Detroit might be the essential boom town, as its decline was documented as early as the 50s and continued until bankruptcy in 2013. As the city declined, it was difficult to keep talent from moving out of the area.

Some local manufacturers eventually stopped growing revenue despite having increased sales. One company I spoke with said that it took about three years until the company started growing again. When asked how they solved their workforce challenges, they worked diligently with local educators, governments, and other organizations to grow and streamline educational offerings.

Today, this company belongs to a partnership of over 1,000 organizations that works to grow a skilled workforce to support the local industry through Automation Alley.

According to their website, “Automation Alley is a World Economic Forum Advanced Manufacturing Hub (AMHUB) and a nonprofit Industry 4.0 knowledge center with a global outlook and a regional focus.”

This company aims to facilitate both private and public partnerships through the innovation of industry and education.

This trend sustained decades of growth with the recession. In 2014 a report from Brooks.edu on Innovation Districts said, “Districts are emerging near anchor institutions in the downtowns and midtowns of cities like Atlanta, Baltimore, Buffalo, Cambridge, Cleveland, Detroit, Houston, Philadelphia, Pittsburgh, St. Louis, and San Diego. They are developing in Boston, Brooklyn, Chicago, Portland, Providence, San Francisco and Seattle where underutilized areas (particularly older industrial areas) are being re-imagined and remade.”

This report covers many of the key factors needed for innovation. Areas of innovation are often found around institutions in underutilized areas with a previous industrial area's infrastructure.

Being fast, flexible, and dynamic are critical to success in many industries. These features help companies get to and adjust to markets effectively. This brings together one last feature this article will cover with an innovation center that isn’t built yet but may be interesting to stakeholders.

Once you have innovation, it needs to get to market fast. Fully digital or software technologies might not be as tied to location, but anything tangible needs to consider shipping and logistics for fast, effective supply chain management.

Recently there was news about a city that has space, educators, and an industrial past.

In 2019, Pittsburgh International Airport announced 195 acres that is the 91st neighborhood of the city. The city is saying that it will become the epicenter of additive manufacturing (AM). Being called Neighborhood 91, it already starts with many of the factors needed for success.

The Neighborhood 91’s site mentions, “Pittsburgh International Airport (PIT) and its Pittsburgh Airport Innovation Campus … [is] located near two major highways, 18 railways and the largest inland port in America. Oh yeah, with numerous nonstop destinations and near countless cargo options, your people and your products can be anywhere in the world in 24 hours or less.” 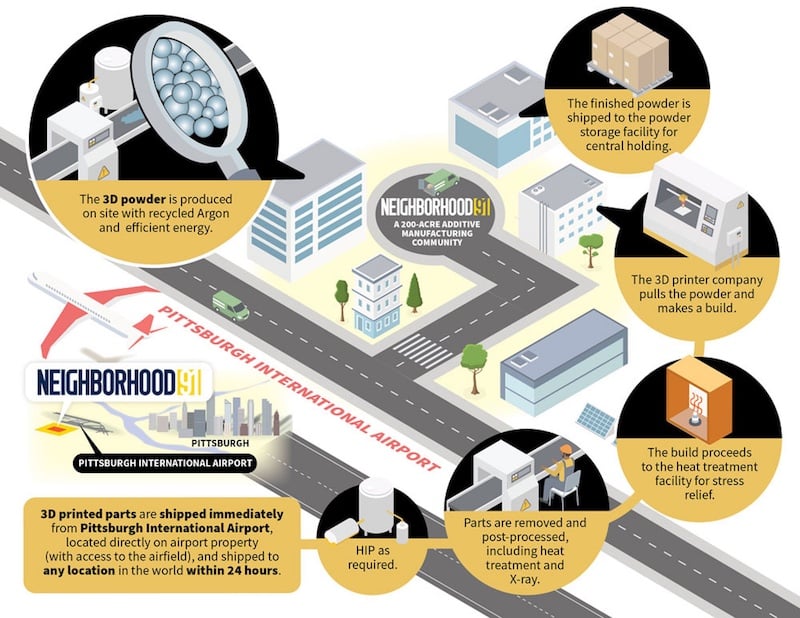 According to a press release, Webtec will build an 11,000 square-foot facility planned to be completed by 2021 to 3D print large scale, lightweight parts for the rail and transit industries that will reduce lead times by up to 80%. The press release also states, “The innovative industrial park at Pittsburgh International Airport will create nearly 6,000 jobs over the next decade and will generate about $2.2 billion in wages over that same time period. Wabtec joins previously announced Arencibia, a company that produces noble gases, including new and recycled argon, a key element used in AM.”

As more value is generated in these collaborative communities, they revolve around manufacturing and workforce.

Traditional education and large industry can experience incumbent inertia. The time period between discovering something new and becoming common is a long road that many innovations fail to make.

With these investments, it may be possible to trace manufacturing speed and success based on which companies are partnered with the fastest, most flexible, most connected innovation center.