This article discusses the concept of state machines and state machine programming, particularly when utilized with ladder logic.

Ladder logic is a common visual programming language that can execute in a PLC. Ladder logic is used to control machinery and direct processes in industrial control applications.

Frequently, there is a desire to utilize ladder logic for sequential control applications. Sequential control produces process outputs that not only depend upon the state of process inputs but also based on the history of the input patterns. Representing sequential control via the concept of “state machines” is an established and appropriate technique.

An example where sequential control might be applicable is in the control of a traffic light. The traffic light change may be triggered by a particular flow of traffic that has occurred in the recent past. We examine a simple sequential control example of a basic conveyor and demonstrate the methodology involved in defining the problem in terms of states.

The state description is then manually translated directly into ladder logic. A nice property of this methodology is that “if then else” rules along with the ability to perform “looping” can be applied to ladder logic.

Each distinct segment of sequential control is represented by a module. A module includes the functional description of the behavior of a self-contained “chunk” of sequential logic. The modules are defined naturally by partitioning the control application.

Commonly, a module represents the function of a single piece of equipment such as a pump, valve, fan, tank, mixer, blower, etc. The behavior of each module is defined based upon an understanding of the process and specific equipment such as actuators and sensors on the plant floor. 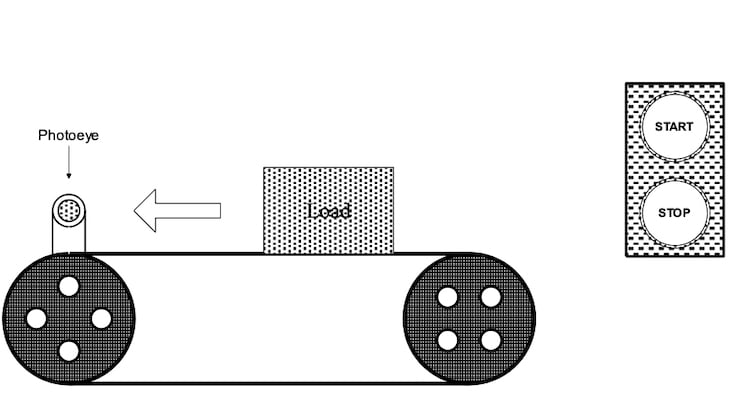 Figure 1. A conveyor system example is explained above.

In this example, a single fault condition is implemented. If the conveyor is running and the load fails to reach the photoeye within a prescribed period of time (10 seconds), a fault is detected, and the conveyor stops.

The boxes represent states, whereas the arcs between the states represent events that define the set of transitions between states. The states and events are identified by both a short description and a number. In our example, the conveyor is initially in the “Idle” state (by convention, the first state, S1 is considered to be the initial state).

When the operator presses the “Start” button on the control panel, the transition “Start” (event E1) is taken, and the module transitions to the “Running” state (state S2). While in the “Running” state, the conveyor motor is energized.  Each event is triggered by a set of predefined conditions.  For example, “Start” (event E1) is triggered by pushing the start push-button.

State actions may either be “continuous” or “one-shot.” Continuous actions, such as running a timer, need to persist while in the state. One-shot actions, such as latching an output, or incrementing a counter, need only occur once when transitioning into the state (edge versus level triggering).

Additional documentation defining both the event conditions and the state actions should also be provided. Listing 1 shows the accompanying documentation for the conveyor module. 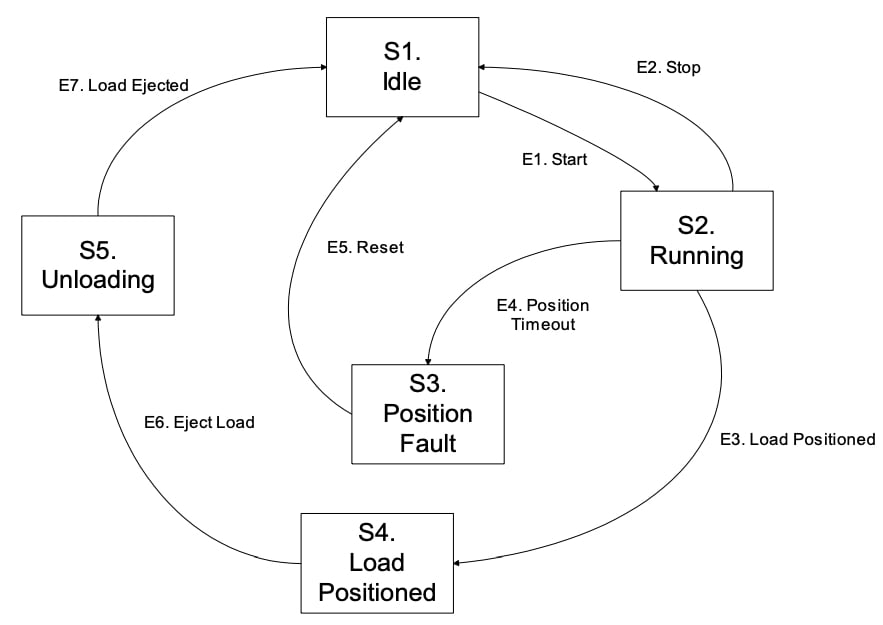 The “start” push-button is pressed.

The “stop” push-button is pressed.

The position fault timer has expired

The MMI sends the “reset” command (unlatch upon receipt).

The “eject load” command is sent (unlatch upon receipt).

This article should provide you with some initial steps needed to understand state machine programming in ladder logic. Another article will dive deeper into module implementation, and the potential for advanced users to construct software tools capable of generating the appropriate ladder logic from a high-level state language description.