The Function and Parts of a Building Automation System

The Function and Parts of a Building Automation System

Building automation systems (BAS) control the environmental parameters of a factory. In this article, learn about the requirements and components of a BAS.

Building automation systems (BAS) are a fundamental part of all industries utilizing factory production. Every product or process running in a factory requires a controlled environment. Without a BAS in place, it is challenging to control the environmental parameters. Control and generation of these climatic parameters are related to HVAC systems, so BAS setup and maintenance are the HVAC system or department’s responsibility.

Figure 1. HVAC systems are the core of a BAS and include a variety of sensors and interfaces. Image courtesy of ABB.

Building automation systems use automation control techniques and different components to maintain the climatic parameters of a building. These climatic parameters need to be monitored so that they do not deviate from the required set values. In addition to maintaining and controlling, the BAS provides network capability to perform all these functions through a centralized control system with a user interface.

Components of a Building Automation System

As described above, a building automation system is not a single entity. It is a combination of different components working together towards a combined goal of maintaining environmental conditions.

Every manufacturer or user can have different components tailored to their needs, but they mainly fall into the following categories:

Let’s review what each of these components does in relation to the larger system.

The controller is a key component of a building automation system — the overall working of a BAS depends on it. The controller is responsible for collecting data from the sensors for the purpose of monitoring the actual parameters and, based on the taught algorithm, it carries out necessary actions to meet the requirements.

Field devices collect necessary information about an area or particular room so that the building automation system carries out a specific action. Some of these devices include measurement sensors for temperature, airflow, humidity levels, differential pressure, CO2 levels, and smoke detectors. Some may also opt for a local meter installed in the concerned area in addition to these measurements. 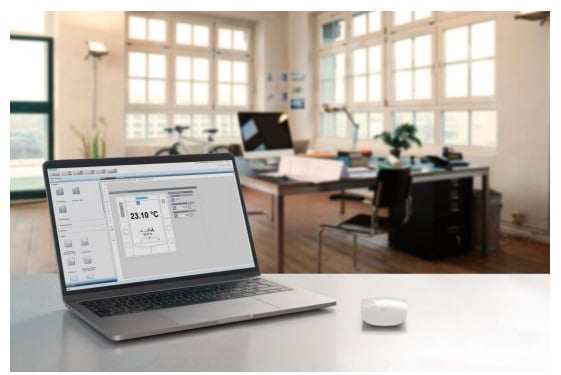 Unlike other systems where automation is utilized, the building automation system is different. This difference is due to a couple of things. The input variables representing environmental conditions continuously change, and the need to control these parameters is essential. If these parameters drift away from their acceptable ranges, it can severely affect the product or process.

Some important characteristics of the automation setup for a building automation system are described below but include much of the components covered in the previous section.

All the devices in the BAS are spread throughout the facility, not located in a single location. In addition, they are not directly connected to the main controller but through a communication medium using protocols to communicate with each device. This is different from process machines or systems where field devices are placed at a single location connected directly to the main controller or PLC.

The controller should continuously monitor many devices and must maintain a balance between them. Most commonly, the control actions need to be performed on more than one device, so the system must handle these devices and not hang or become irresponsive due to overload.

The controller should identify the correct device for taking input and giving commands over a shared communication system. Some manufacturers provide dedicated controller devices specifically made for use in building automation systems.

The user interface is how the building automation system interacts with humans. It takes the desired input and, based on these input points, the controller automates the system. The UI also displays the actual parameters, presenting real-time environmental conditions.

Most commonly, the user interface consists of graphical diagrams representing each location of an entire facility with numerical values indicating the actual parameters.

The user interface is placed at a central location accessible by relevant maintenance staff for monitoring purposes. Some also display the user interface on the factory floor, allowing analysis by the production crew.

There are two options for a user interface: thick client and thin client.

In a thick client system, the software is installed at the location that requires monitoring. The application run on the system contains software that must be purchased by a third party company.