Engineers and designers are focused on building more efficient and green structures. Modern-day building automation systems can reduce inefficiencies, energy consumption, and carbon footprint. Government support for these innovative systems also enables installation, expanding their range. Powering these modern systems is a challenge, and in this article, we will focus on six key applications.

Building automation systems include many subsystems. Below are three main categories.

An energy management system monitors and analyzes the energy usage of the building. Depending on the setup, the system can collect data from the entire structure or room, down to a single plug.

The information collected can determine the power usage patterns. In addition to monitoring the power usage, the system can also detect unusual power draw or patterns indicating failed or failing equipment. Cutting power during such events could help protect the expensive systems and potentially prevent fires.

HVAC systems typically are the most power-hungry subsystems in a building. The consumed power can be reduced through various building automation technologies. The HVAC system can incorporate various devices like occupation sensors and shade control systems that allow output adjusting based on the need. The HVAC control system, when paired with the energy management system, can lower the electricity time-of-use rate by running noncritical systems during off-peak periods.

Below are some examples of building automation applications and how they can be powered.

A smart meter is a digitized version of the traditional meter. It includes a voltage sensor and a current sensor for basic metering functions. It also includes communication modules, which allows it to report the power usage information to the energy management system.

As the meter is usually placed at the system input, it is prone to interference by external factors. An electromagnetic capability (EMC) protection device or circuit at the input of the power converter is mandatory. The alternating current (AC) input from the grid is converted into 12 V by an isolated AC/DC converter to supply the GPRS and power line communication module.

Products such as Aimtec’s open frame series can accept an input voltage range of 85–305 VAC, which supports a single-line three-phase input and offers isolation protection to the downstream devices. The 12 V is then stepped down to 5 V to power the metering unit, microcontroller unit (MCU), LTE module, and RS485 module. As the RS485 is an isolated communication module, an additional 5 V to 5 V isolated converter is required. 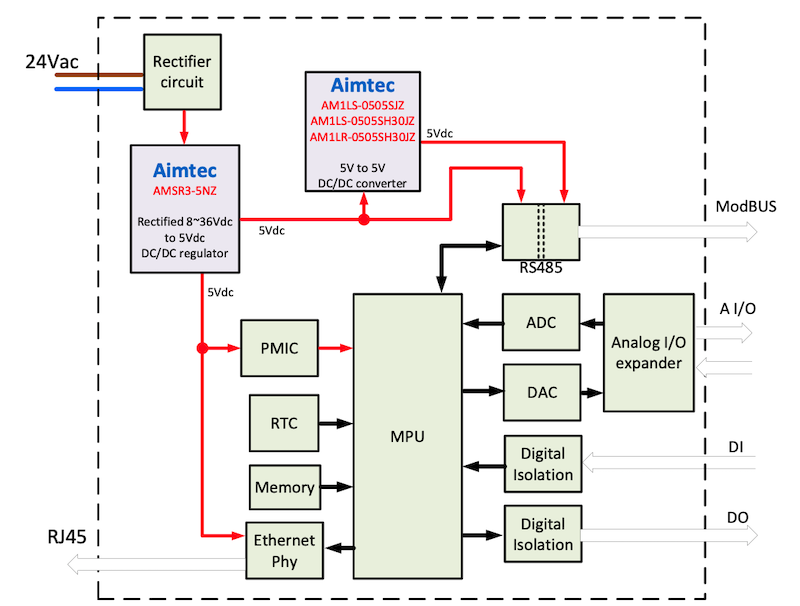 The system in the below example uses the common 24 VAC as the input power source. The 24 VAC input is rectified into DC and then converted into 5 VDC by a DC/DC switching regulator. As the main processing unit is more complex, the power supply of the micro-processing unit (MPU) and surrounding components are handled by power management integrated circuits (PMICs). The RS485 and ethernet modules are powered directly by 5 V and with no exception, an isolated 5 V to 5 V DC converter is placed for the RS485 communication.

Similar to the BACnet controller, the 24 VAC input is rectified and serves as the input to the DC/DC converter. The communication modules and display are powered by 5 V from the DC/DC converter while a low-dropout regulator (LDO) supplies 3.3 V to the MCU. 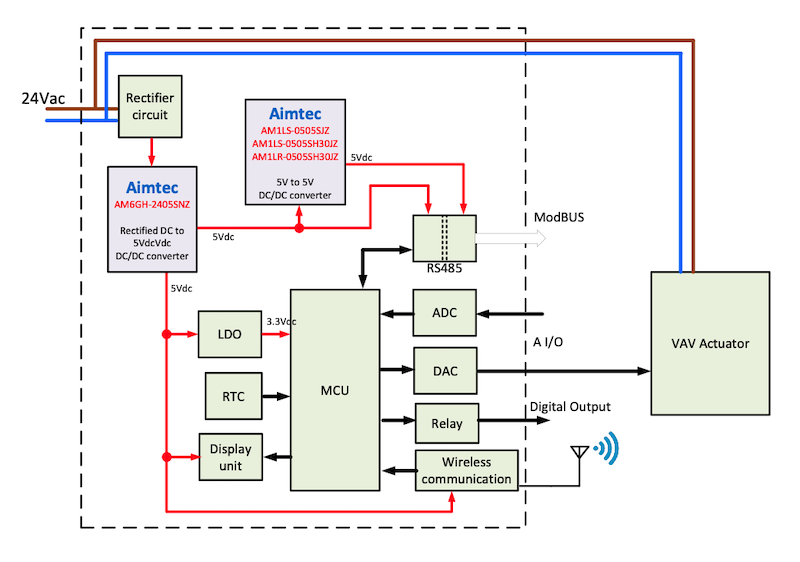 Building automation is a complex undertaking; multiple systems need to work together to achieve the desired result. Besides the aforementioned systems, many other devices need to have a certain level of automation control.

This is where the general-purpose programmable automation controller can step in. The controller is equipped with a digital and analog I/O to allow for multiple types of sensor inputs and control signal outputs. The RJ45 and RS485 connectivity allow the system to work with other devices and exchange information.

The controller in the example has the option of using the 110 VAC, 220/240 VAC, or 24 VAC as the power source. For 24 VAC, the power is rectified to DC and converted into 5 VDC by an isolated DC/DC converter. The 5 V rail powers the display, connection modules, and PMIC. As the system equips analog-to-digital converter (ADC) and digital-to-analog converter (DAC), which requires ±15 VDC, a 1 W 5 V to ±15 VDC converter is used. For 110/220 VAC input, the power is first converted into 24 VDC then converted into 5 VDC. With 24 VDC power, the device can run an additional analog I/O expander. 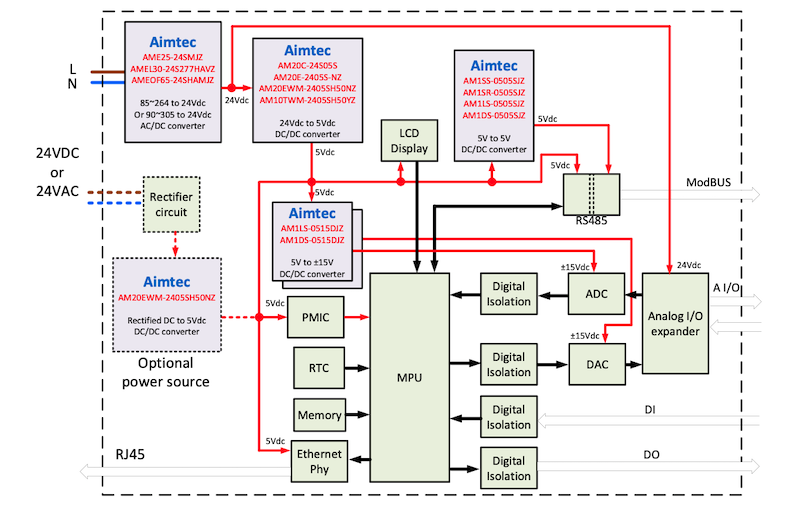 A complex automation system would require a visualized user interface (UI) to aid control and maintenance. The HMI (human-machine interface) consists of a high brightness display for better clarity under sunlight and a touchscreen for intuitive control. Serving as an automation control interface, wireless connectivity is a must. This provides the users with more flexibility in terms of controlling and monitoring the entire automation system status.

The HMI can also be used as a debugging tool. The ethernet and RS485 ports enable a direct connection to the control module, which allows onsite diagnostics when the problem cannot be solved remotely.

The HMI features a built-in 12 V battery for portability. For stationary monitoring and controlling, the device can be powered by a 12 V adapter. The 12 VDC powers the touchscreen and display unit directly as these two units usually consume more power. A 12 V to 5 V DC/DC converter powers the wireless communication module and the LDO for the MCU. 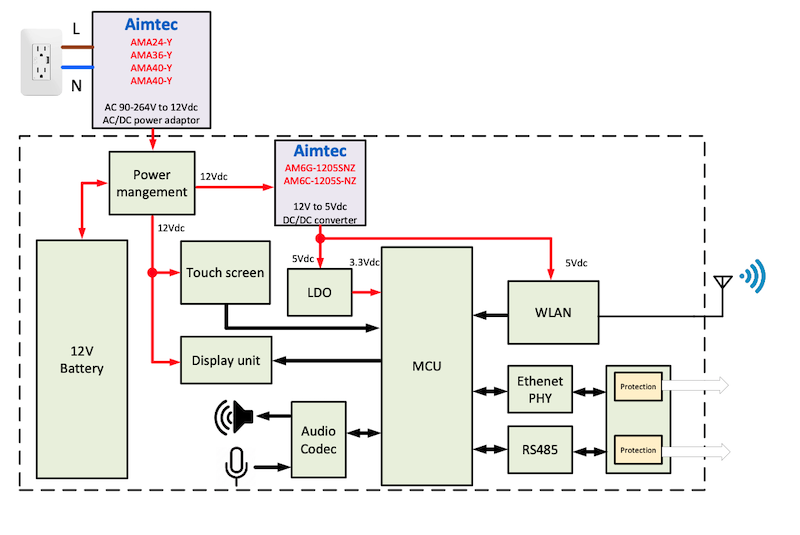 Aimtec is a global designer and manufacturer of modular AC/DC and DC/DC switching power supplies. The company’s standard products include DC/DC converters up to 250 W, AC/DC converters up to 350 W, light-emitting diode (LED) drivers reaching 250 W, as well as AC adapters.