Pressurized gas leaks can sometimes be heard with the human ear, but small leaks with ultrasonic sounds are much more difficult to detect. Ultrasonic leak detectors can help to find otherwise undetectable leaks.

Pressurized air and gas leaks give off a hiss. You might be able to hear some, but probably will miss the small, slow leaks. Small leaks have much of their energy in the ultrasound region, which is undetectable to the human ear.

Ultrasonic leak detectors are available from several manufacturers. At a basic level, these are highly-sensitive, ultrasonic microphones. Most translate the sound to audible: you put on a headset and listen. Some lower-cost detectors are more like a signal strength meter, producing a sound or tone which varies with ultrasound intensity. Most include a signal strength display or meter.

How to Use an Ultrasonic Leak Detector

A leak detector is a handheld, battery powered instrument. You put on the headset, aim it toward suspected leaks, and listen. You’ll hear a leak as a noisy, rushing sound that gets louder as you focus on the leak. (In some products, you’ll just hear a tone or sound that changes as you approach the ultrasound.) As a bonus, ultrasound detectors ignore audible sounds, of which there are plenty in most industrial environments. The sound of the leak won’t be drowned out by machinery and other noises.

You’ll hear most leaks from a good distance, sometimes as far as 30-40 feet (9-12 meters), depending on the detector and the size and characteristics of the leak. Start by setting the sensitivity high. Once you’ve heard a leak, move closer, reducing the sensitivity as you close in. The signal strength display might help you find the best direction. When you get close enough, you’ll find the exact location of the leak. 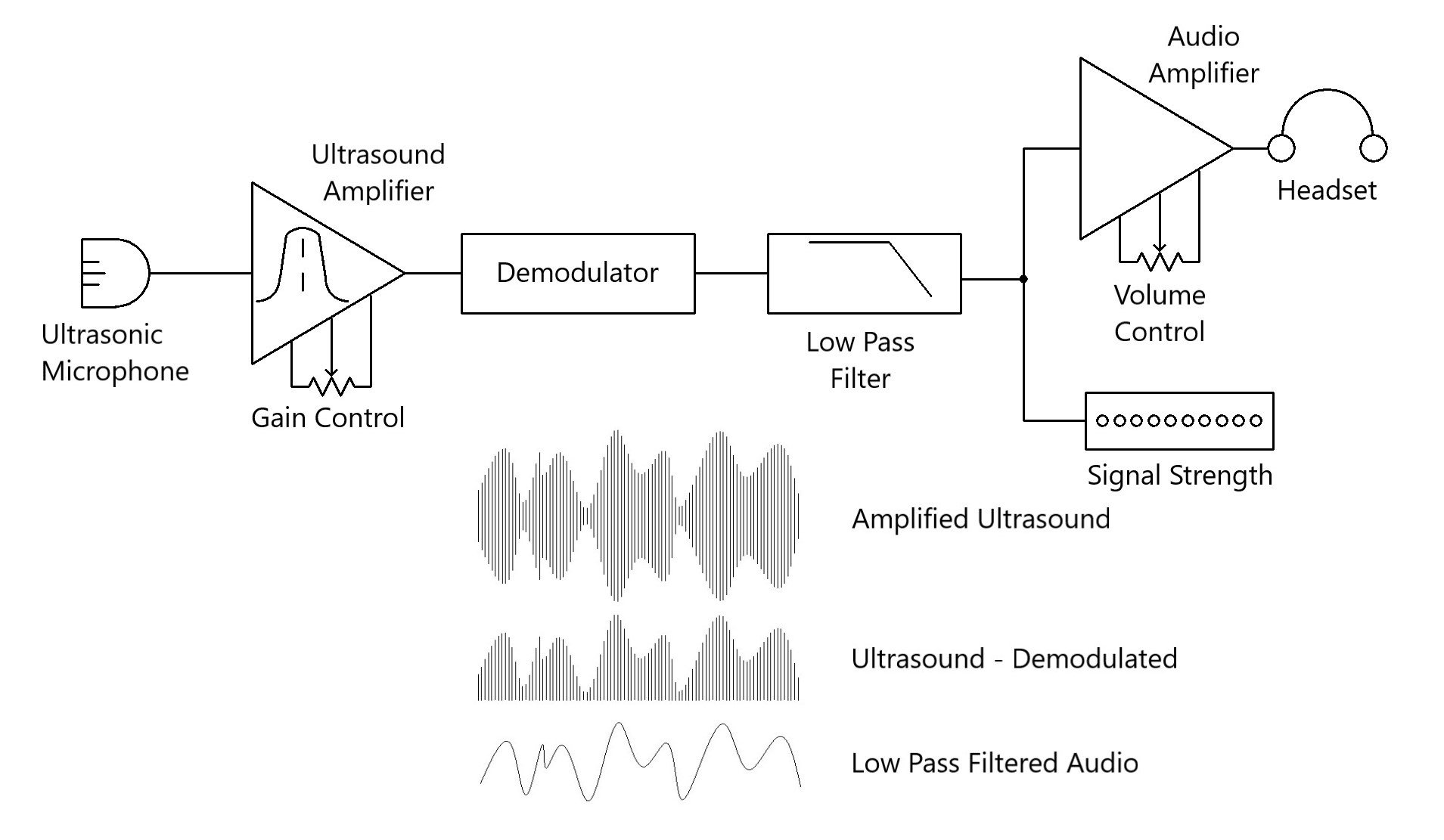 How Does an Ultrasonic Leak Detector Work?

Figure 2 shows the basics. (The diagram applies to units which actually hear the leak, not to those which just produce a varying tone or sound.)

The ultrasonic microphone’s signal is greatly amplified by a bandpass amplifier which rejects audible frequencies. Most leak detectors detect waves around the 40 kilohertz range—40 kHz microphones are available for just a few dollars. A few can process a wider, or adjustable, frequency range.

The amplified signal is demodulated, filtered, and converted to audio. Demodulation begins by converting, or heterodyning, the ultrasound down to audio. (Heterodyning is a frequency shifting process, widely used in analog radios and TVs.) The audio is fed to the headset and to the signal strength display.

The functional diagram shows a linear analog system. Years ago, I designed one. Today, these functions can be implemented digitally using microprocessors and digital signal processors (DSPs).

Applications? Obviously, finding leaks! Compressed air and gas leaks. Steam lines. Air conditioning freon or coolant leaks. Vacuum lines. (Caution - when looking for combustible or explosive gas leaks, use a detector rated for hazardous area use. Most are not.)

Freon and other specific gas detectors need to be close to the leak. Ultrasonic detectors do not. I once demonstrated an ultrasonic leak detector in an HVAC manufacturing plant. Their inspections included large, water-filled pits where they submerged fully charged units and looked for bubbles. We used the leak detector on a large, rooftop chiller which was fully charged, had passed all tests, and was ready to ship. We ended up finding a leak—they ended up buying a leak detector.

Most manufacturers include—or offer separately—small, battery powered ultrasound sources. They are used to find leaks and voids in systems that are sealed but not pressurized. Examples include gaskets, door and window seals, windshields, refrigerators, freezers, and gasketed storage. You simply put the source inside, close the system, and listen on the outside for leaks. Sometimes it takes a bit of experience. Single-pane glass, for example, can transmit some of the ultrasound through, but a gasket leak will be louder.

Most also include stethoscope-like probes for listening to mechanical sounds. Once you learn what “normal” sounds like, you can hear defects such as worn bearings (clicking or ticking sounds instead of smooth) and malfunctioning steam traps.

Other ultrasounds in the area may mask the sound of the leak. Compressed air tools and equipment, or sources of fast-moving air, obviously, can generate leak sounds. Arc lights, some machinery, and fast-switching electronics can also create ultrasound. Fortunately, ultrasound is fairly directional. You often can aim the leak detector toward the area you are investigating and away from unwanted sources. 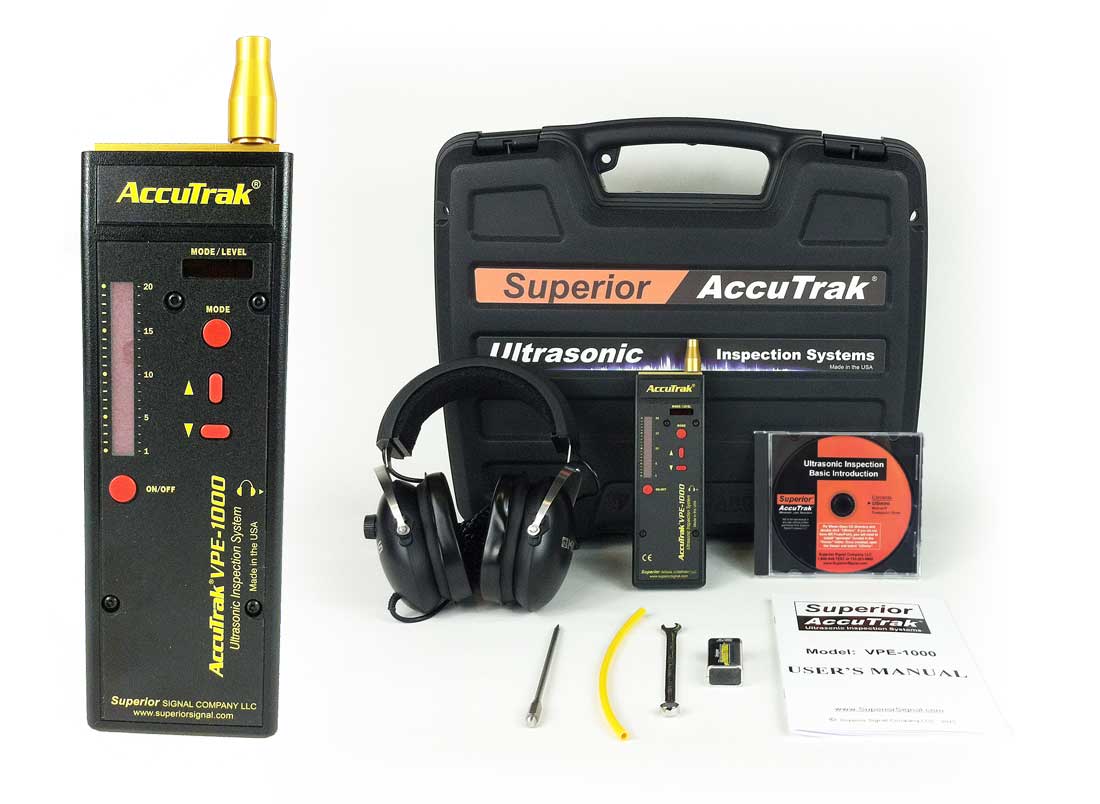 Ultrasonic leak detectors run the range from a few hundred US dollars to $4,000 and more. Most are available with complete kits including headphones, batteries, a carrying case, and often, a stethoscope vibration probe and an ultrasound source. Some also include other accessories, such as a directional or focusing probe. Figure 2 shows a typical kit.

Brand names include UE Systems, Superior-Accutrak, Amprobe, Infinicon, Lutron Instruments, Bacharach, and Reed Instruments. There may be more. Most are carried by industrial distributors—visit the manufacturer websites to find them. I also found an information site, leak-detectors.net (all types, not just ultrasonic).

If you really want to go high class, at least three manufacturers (UE Systems, Fluke and Teledyne-FLIR) offer handheld instruments which combine thermal imaging with ultrasonic arrays. They provide camera-like images which show the leak location on top of a thermal image. US prices run in the $20,000 to $40,000 ballpark. They’re not covered in this article.

40 kHz narrow-band transducers are available from MuRata, CUI, PUI Audio, and possibly others. Available through electronic distributors, they cost typically $5 to $10 US in small quantities. Both “send” and “receive” transducers are available: they’re used in ultrasonic range or proximity detectors. Sometimes they’re tricky to find using the website search function. Try “transducers”, “microphones”, and “ultrasonic”. I once found them under “proximity detector”.

Ultrasonic leak detectors make it possible to find air and gas leaks from a distance. They also can hear electrical arcs and discharges. Most include stethoscope probes for listening to mechanical sounds such as bearings. A wide variety is available, costing from a few hundred to several thousand dollars.