Hello acoustics, my old friend. I've come to monitor you again. Because a worn-out bearing softly creeping, slowly got worse while I was sleeping. And the vibration that was planted in my brain still remains… Within the sound of Maintenance

Before the invention of solid-state hard drives, many computer users could describe the sound of a hard drive failure. Instead of calmly whirring away, there was a grinding, scraping, or tapping. Then, the data was gone forever. Automobile mechanics are used to hearing statements about how the car sounds, helping to diagnose problems based on those noises.

As long as there are moving parts, industrial machinery will make noise. Even the most expensive set of precision bearings will transform some mechanical energy into noise. In some cases, the noise is very slight, and in other cases, the noise is at a nuisance level, making conversation in the room difficult, or requiring the operators to use hearing protection.

But for all this talk about volume itself, it is rather the changes in noise output that often cause the most concern. A machine happily whirring away, even at a high volume, may be perfectly acceptable. However, once that noise changes in magnitude or tone, or when it becomes intermittent, that is often a sign of upcoming problems. 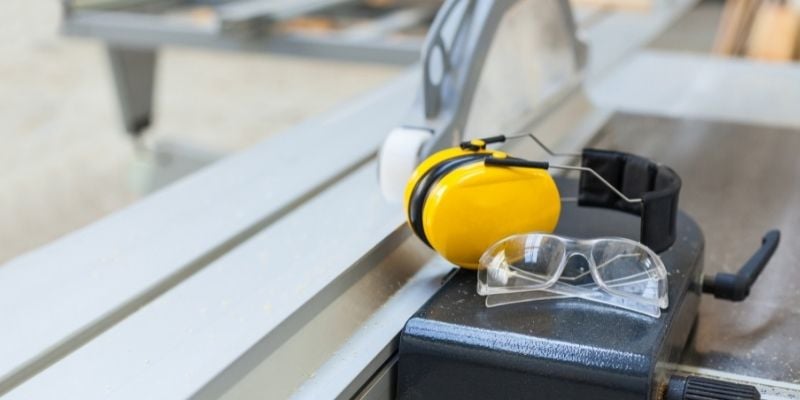 Figure 1. Volume alone is not enough to accuse a machine of failure. Changes in volume can point to breakdowns. Image used courtesy of Canva

The most basic acoustic sensor of all is the microphone. The simplest microphones consist of a driven element that is attached to a magnet. As the sound waves move the driven element, the magnet moves back and forth past a coil. As we learned from high school physics classes, a changing magnetic field will cause a current in nearby wires. The current in those wires can be measured, changing direction at the frequency in response to the tones that caused the driven element to move.

In these basic microphones, any sound that strikes the driven element (cone) face directly will generate the strongest movement, and thus the largest current. This means that standard unidirectional (‘uni’ meaning one) microphones should be pointed directly at the sound source for the best results. On the other hand, omnidirectional microphones (‘omni’ meaning all, and now I think my knowledge of Latin is used up) are theoretically able to detect sounds equally in all directions.

Which is better? It depends on the application. If the source of the noise is a particular suspected component in a known location, such as checking a potentially worn bearing, a unidirectional microphone may be preferred. The reason for this is that the unidirectional microphone amplifies in only one direction, meaning there will be a stronger signal in front of it and reduced noise on the sides. It helps isolate trouble signals from background noise. However, if general noise monitoring is required over a larger area, such as monitoring a room for noise level to ensure health and hearing protection compliance, it is better to monitor in all directions. 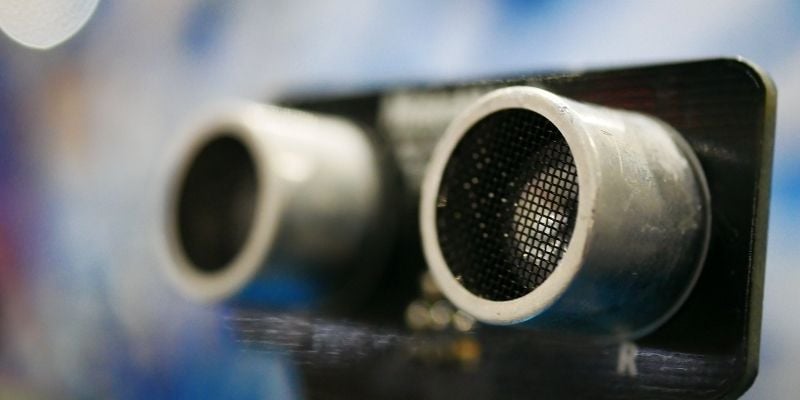 Some sensors, such as microphones, are passive, in that they only collect signals that are generated elsewhere. There are also active sensors that generate a noise, then listen to collect the response from a workpiece. In particular, there are ultrasonic crack detectors that generate an ultrasonic signal and listen for the vibrations in the material to determine if there are cracks, as the cracks will cause the signal to distort in particular directions. Ultrasonic crack detectors such as this are especially useful for nondestructive testing (NDT) of cast parts, pressure vessels, and pipelines.

Another method for narrowing down trouble spots is to use microphone arrays. These arrays consist of multiple microphones arranged in a known pattern. Because the spacing of the microphones is known, a well-built data acquisition system can track the timestamps of when a noise arrives at each microphone. These signals can be converted into distance measurements, and once the distance measurement from each microphone is known, the trouble spot can be pinpointed. This is similar to how seismometers determine the epicenter of earthquakes; they triangulate the position.

The downsides of using microphone arrays are that they require many microphones in a fixed arrangement and high-end processing capabilities for signal analysis. This limits the system’s portability, and such systems are typically installed semi-permanently near troublesome equipment or equipment that will benefit greatly through early detection of problems. Some interesting array designs to appear recently rely on fewer microphones, but a rotating arm to provide them with a wider field of view, such as Seven Bel’s recently-announced Sound Scanner.

Triangulation to pinpoint the location of noise sources is just one example of how signal processing can speed up troubleshooting time. This method is especially useful for complex assemblies or many moving parts in a small space.

Another method of signal processing is to analyze the frequencies that are being emitted from a device and see how they compare to other nearby signals or reference background signals. In this data analysis technique, samples of sound are taken and are examined in terms of sound frequencies.

The sound frequencies are extracted using a Fourier transformation. Without going into the mathematical details of how this is performed, the simple way to describe it is that a random sound consists of a mix of different frequency signals. Instead of looking at a time-based sinusoidal wave that hides these hidden signals, the Fourier transform allows the operator to view the signal with frequency on the x-axis instead of time. The louder the emission at a certain frequency, the higher the position on the y-axis, which is often expressed in terms of gain.

Because factory environments are noisy in general, occasional sampling of the background noise during normal operation is required. Once these have been collected, they can be subtracted from signals where a problem may be present. This makes it easier to identify the signals that have changed, and thus might indicate a problem.

While implementing robust acoustic monitoring may be expensive, it has some benefits. Consider the following examples.

Precision machining requires the right combination of machine tools, measurements, and control conditions. However, the status of the machine tools changes over time as cutting tools wear, causing variation in part geometries or cutting times. One way to mitigate this problem is to use a unidirectional microphone and listen for increased “chatter”, where the workpiece is making more noise during machining operations. Once this signal is detected, maintenance can be scheduled to replace the blade, bit, or tool, instead of waiting for parts to fail quality assurance later in the process.

A noisy conveyor at a mine site has multiple rollers and bearings. The bearings are lubricated automatically, but sometimes the lubrication ports get jammed with debris. Operators can only hear a bearing squeaking when it is too late to save the bearing, due to the noise of the mine. With an array of microphones and Fourier transforms, problem bearings can be identified when the noise is still slight. 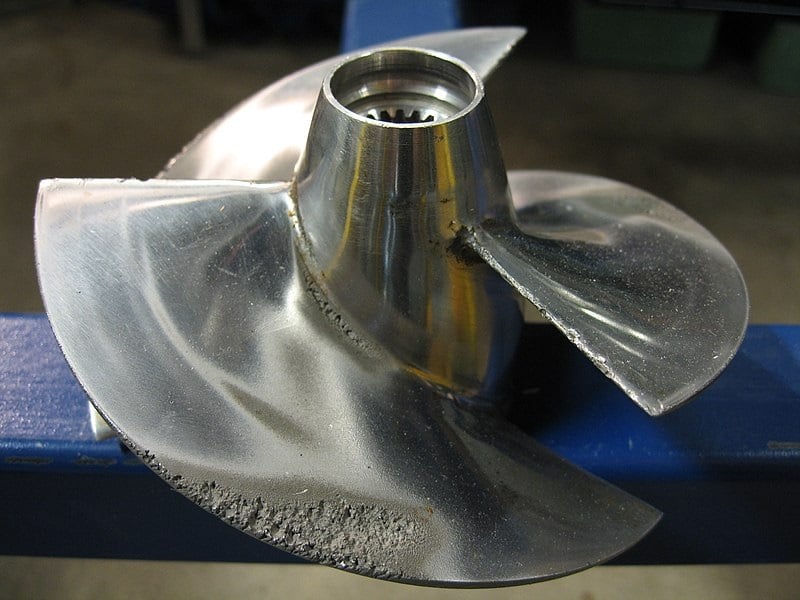 One of the enemies of pump life is cavitation, where the pressure drops low enough to cause liquid to vaporize. The violent vaporization bubbles nick the blades of the impellers, causing them to wear much more quickly. With a unidirectional microphone, the vaporization can be heard and the pump speed or flow pressure adjusted to prevent cavitation.

Ultrasonic crack sensors are often used on pipeline inspection gauges (PIGs). The PIG is inserted into a pipeline and propelled through, sending ultrasonic signals and collecting the responses along the way. The PIG is recovered and the data analyzed. Based on the response signals, thin spots from wear or corrosion can be identified before the pipeline leaks. 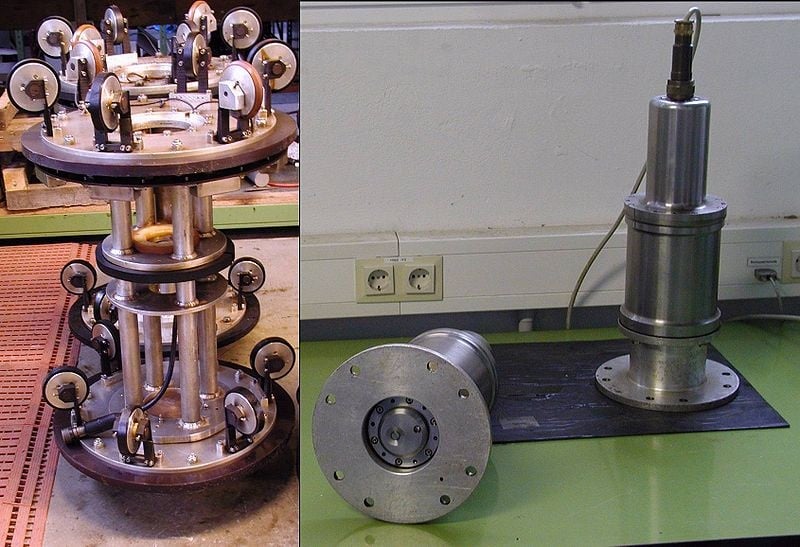 The Future of Acoustic Monitoring

Acoustic monitoring will continue to be a growing field from both a health and safety perspective as well as a diagnostic tool for preventative maintenance. As sensor prices decrease and computational algorithms advance, more and more industry professionals will turn to acoustic monitoring as a contactless method of collecting health data for machines.