A different filtering technique called negative filtering does just the opposite: placing a filter cell in the path of the light to absorb all the wavelengths associated with the gas of interest, leaving all other wavelengths unattenuated. One application of this technique is called Gas Filter Correlation, or GFC spectroscopy. This same technique is alternatively referred to as Interference Filter Correlation or IFC spectroscopy. 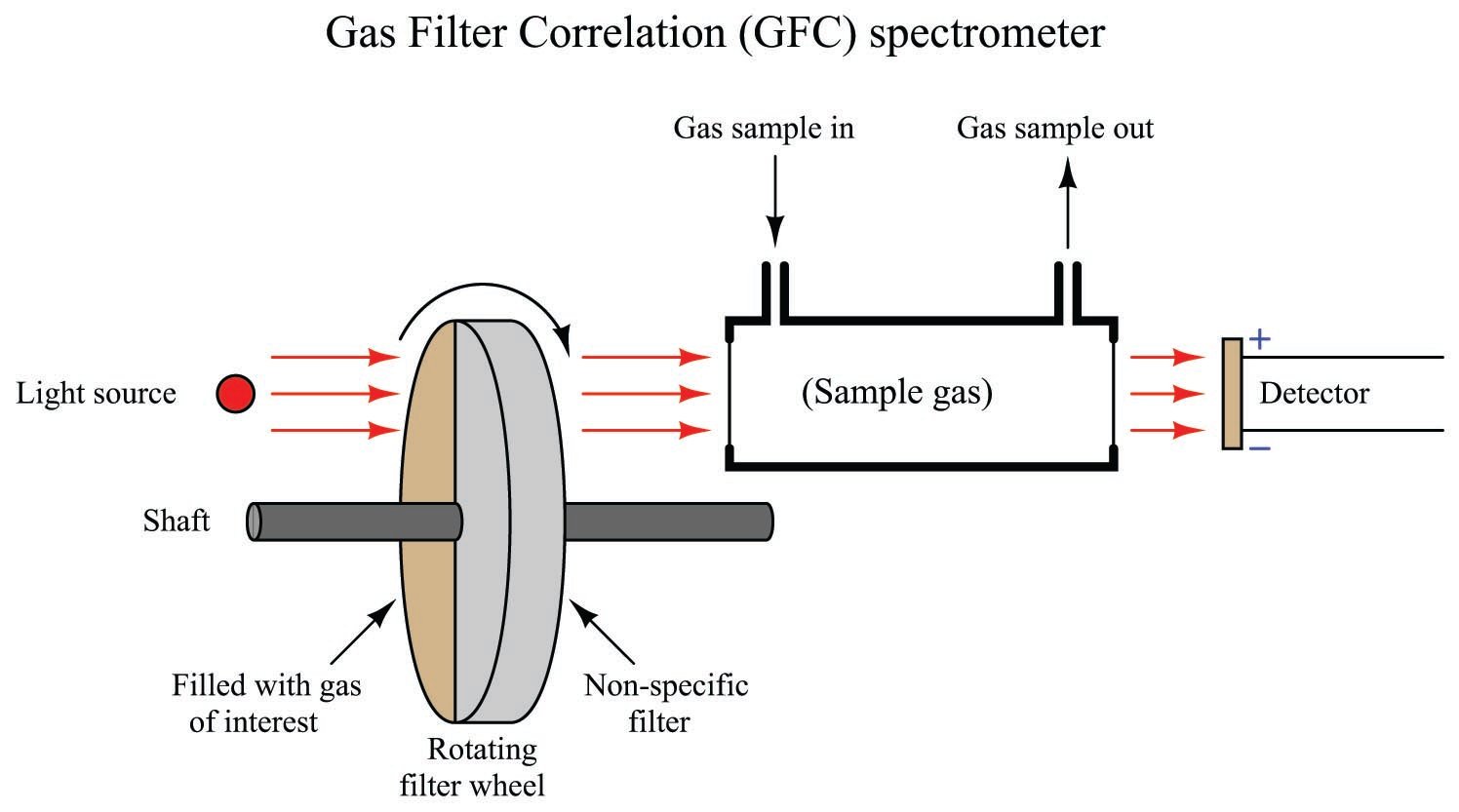 The filter wheel consists of two transparent halves: one containing a high concentration of the gas of interest, and the other designed to consistently attenuate every light wavelength (i.e. the entire spectrum) emitted by the source. The attenuation factor of the “neutral” half of this filter wheel is precisely adjusted so that the same gross intensity of infrared light enters the sample gas cell at all times, regardless of the filter wheel’s position. The light detector positioned after the sample cell must be designed for non-specific response to light (i.e. not selective to certain wavelengths of light). Unlike a Luft detector, we want this detector to respond to a broad spectrum of light.

If some of our gas of interest enters the sample cell, it will begin to absorb some of the light during the time when the “neutral” filter aligns in front of the cell. During the other half of the filter’s rotation (when the light must pass through the high gas concentration chamber), our gas of interest inside the sample cell has no effect, because all those wavelengths of light have been eliminated by the filter. The result is a changing signal at the detector, the amplitude of oscillation proportional to the concentration of “correlating” gas (matching the absorption spectrum of the rotating filter’s gas) inside the sample cell.

The effect of “interfering” gases in the sample cell depends on the nature of those gases. An “interfering” gas with an absorption spectrum encompassed by the absorption spectrum of the gas of interest would be indistinguishable from the gas of interest by this instrument – we would say this gas has a positive interference. Such gas would absorb wavelengths of light from the beam during the time light passes through the “neutral” filter, and it would absorb no wavelengths during the time light passes through the gas filter, just like the gas of interest. A different “interfering” gas absorbing completely different wavelengths of light than our gas of interest would absorb light at all times regardless of the filter wheel’s position. However, given an equal percentage of absorption in a region of the spectrum untouched by the gas filter side of the wheel, but uniformly attenuated by the “neutral” side of the wheel, means that the effect of this gas would be to absorb more light during the gas-filtered part of the wheel’s rotation and less light through the “neutral-filtered” part of the wheel’s rotation – just the opposite of positive interference. Thus, a gas with an absorption spectrum wholly different from our gas of interest will have a negative interference-effect.

This makes the Gas Filter Correlation (GFC) analyzer ideally suited to distinguish gases whose spectra overlap over the same general ranges but differ in fine detail (i.e. where the individual “peaks” and “dips” in the different spectra randomly intersect). One such practical application for GFC analyzers is combustion exhaust gas analysis for carbon monoxide (CO) in the presence of carbon dioxide (CO\(_{2}\)) and water vapor. Unlike the dual-beam “Luft detector” style of an analyzer, the GFC analyzer does not require individual filter cells for each interfering species of gas. This is a major advantage where multiple interfering gases coexist with the gas of interest.

Being a single-beam style of an analyzer, GFC instruments are much easier to implement as open-air gas analyzers than dual-beam designs. Dual-beam analyzers require sample and reference cells of equal length and identical construction, in order to draw a comparison between the light passing through sample versus the same light passing through a completely non-absorbing gas. Single-beam analyzers have no need for a reference light path, and so the sample beam may be passed through open-air (or through the diameter of an exhaust stack, for example) to sense gases anywhere in that region, rather than be limited to the physical length of any gas-filled cell. Recall from the Beer-Lambert law that absorbance increases in direct proportion to the path length of the light:

\(a\) = Extinction coefficient for photon-absorbing substance(s)

\(b\) = Path length of light traveling through the sample

\(c\) = Concentration of photon-absorbing substance in the sample

\(I\) = Intensity of received light after passing through the sample

The longer the path length, the more light will be absorbed by the gas, all other factors being equal. This increases the analyzer’s sensitivity to low concentrations, which is especially important when measuring gas concentrations in the low parts-per-million (ppm) or even parts-per-billion (ppb) range.

An example diagram for a GFC analyzer used to measure gas concentrations in the open air is shown here: 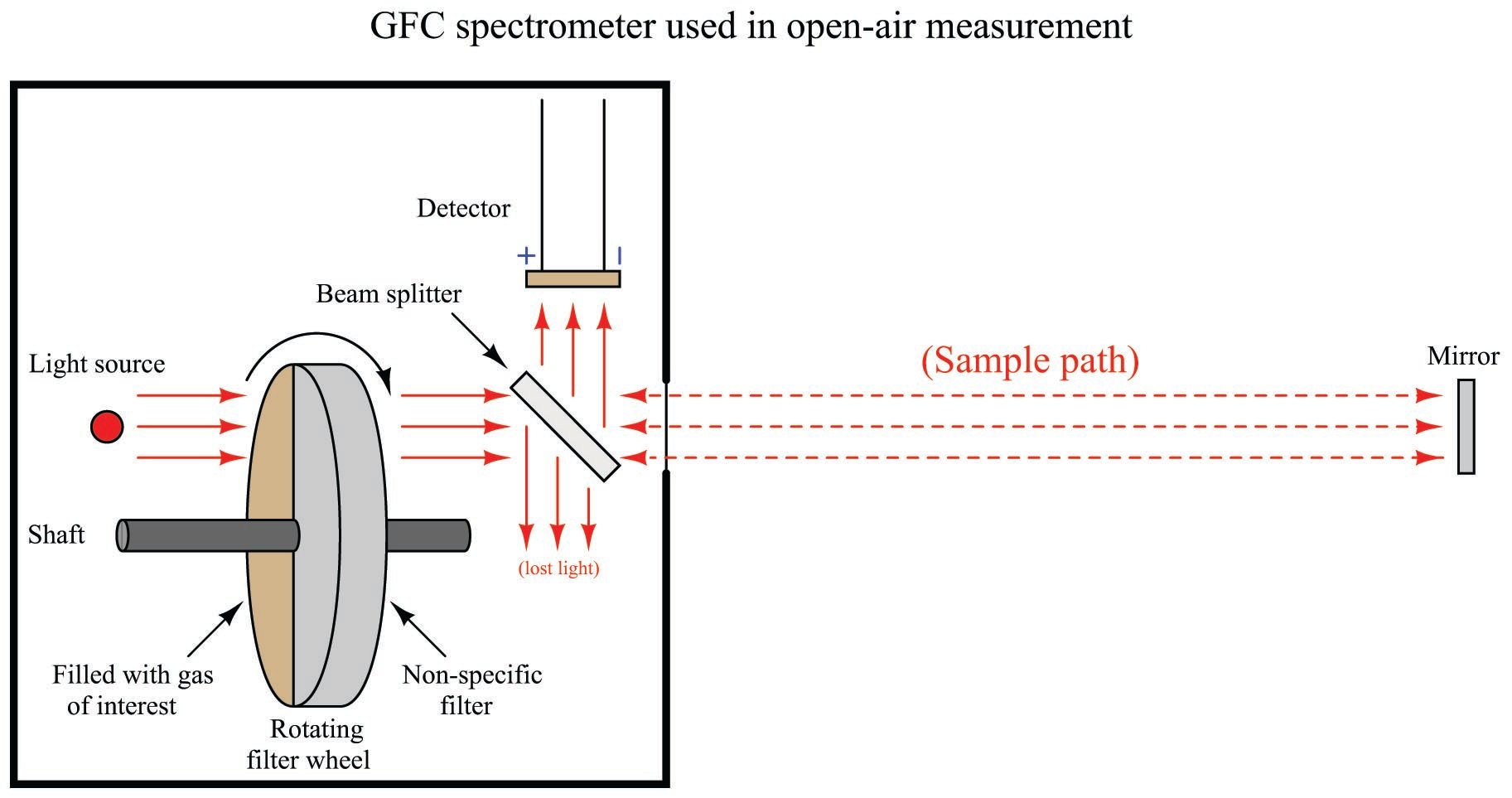 Light passing through the rotating filter wheel strikes a beam splitter (a partially-silvered glass plate angled at 45\(^{o}\)) where approximately half the light passes through to the sample space and the other half is lost to reflection. At the far end of the sample space, a full-silvered mirror reflects all the light back to the analyzer, where it strikes the beam splitter again, with approximately half of that light reflecting off at 90\(^{o}\) to reach the detector. With this arrangement, the path length (\(b\) in the Beer-Lambert Law) is equal to twice the distance between the analyzer and the mirror, since the light must travel one way to reach the mirror, then return the same distance back to the analyzer. As you might imagine, extremely long path lengths are easy to achieve with this style of the open-air analyzer.