Safety analyzers are designed for fast response, rugged construction, and ease of portability. As such, they are usually not as accurate or as sensitive to slight changes in concentration as process analyzers. The sensing technologies used in safety analyzers are often very different from those used in process analyzers. You will never, for example, see an NDIR instrument with a Luft-style “microphone” detector used for portable safety applications. The high accuracy of a Luft-style NDIR instrument is not necessary for safety, and the bulk (and fragility) of such an instrument makes it completely impractical as a portable device.

An important industrial application of safety gas analyzer technology is testing the safety of the atmosphere inside a confined space, such as an industrial vessel that has been emptied in preparation for workers to enter and perform maintenance work. Virtually all pressure vessels are classified as confined spaces from the perspective of internal maintenance work, and many are explicitly labeled as such to remind workers of the danger:

This photograph shows a hand-held safety gas monitor, used to detect four different gases with known hazard levels (oxygen, carbon monoxide, combustibles, and hydrogen sulfide). A technician working in hazardous environments would wear one of these at all times, listening for the audible warning tone generated by the device if any of its pre-set limits is exceeded:

Most portable gas analyzers such as this employ electrochemical sensing “cells” generating a small electric current when exposed to the gas of interest. Such technologies may not always be the most accurate or the most sensitive, but their characteristics are well suited for portable applications where they will be exposed to vibration and must operate on battery power.

A close-up photograph taken of the monitor’s alarm thresholds reveals the relative concentrations of four gases monitored by the device. Two distinct alarm levels – “low” (alert) and “high” (danger) – exist to warn the user of threats: 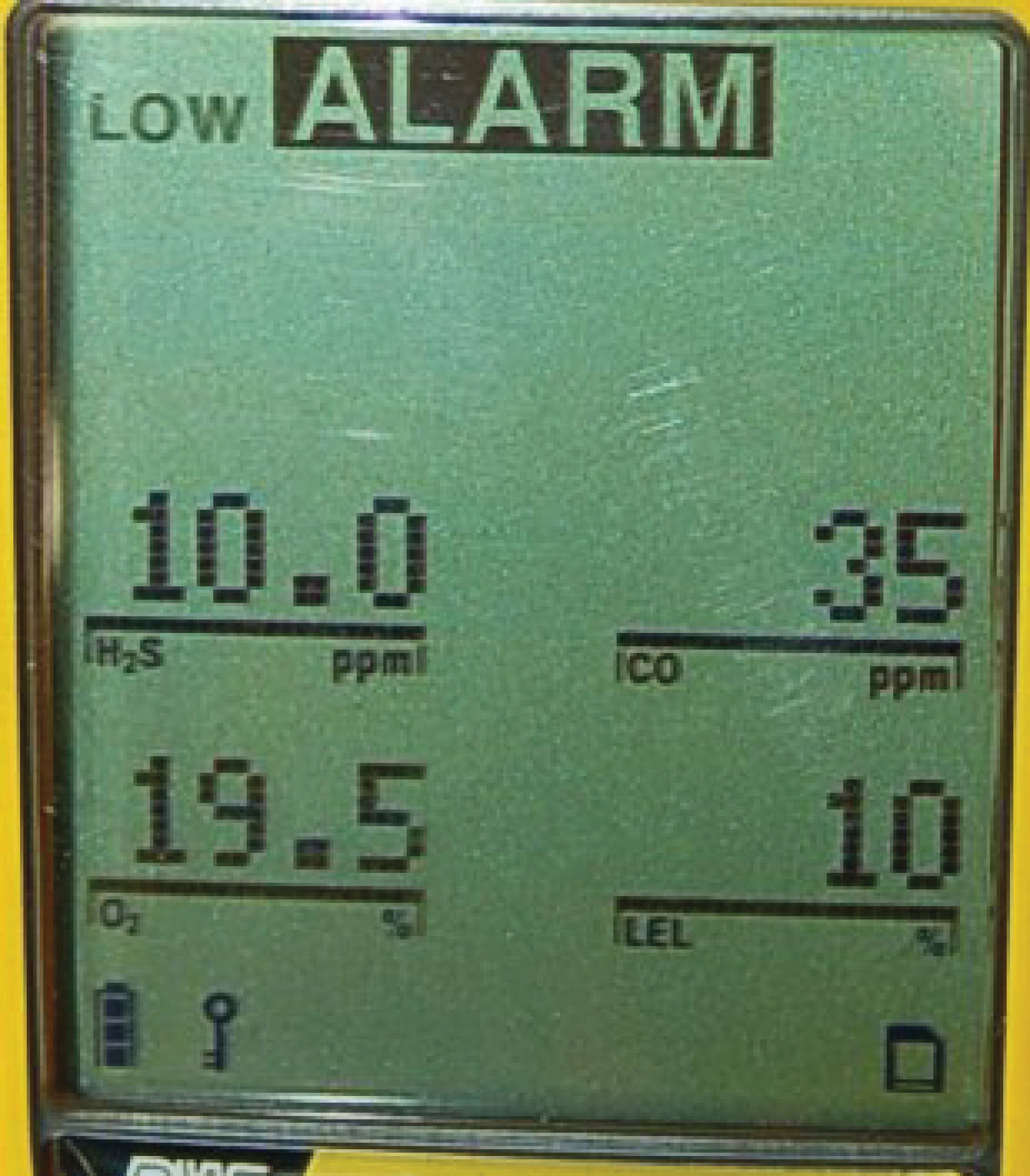 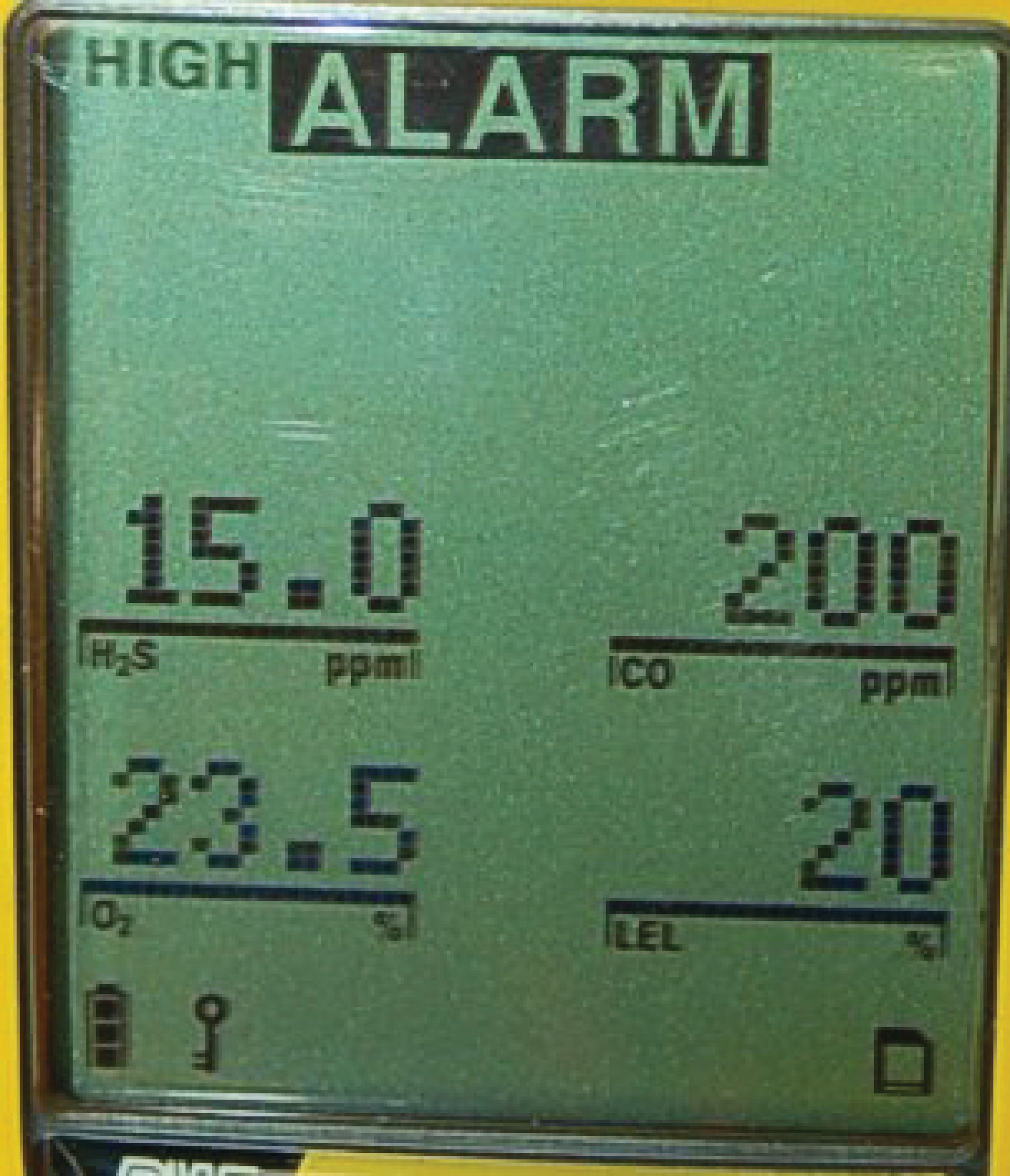 Like all safety-related devices, portable gas analyzer require regular “proof-testing” and calibration. In order to accurately check the response of a gas analyzer, it must be exposed to gases of known concentrations. Special mixtures of “test gas” for safety analyzers are available from chemical supply companies, the next photograph showing the certified concentrations of different gases contained inside the pressurized test cylinder:

Note the limited shelf life of this span gas: only one year between its date of manufacture (November 2007) and its expiration (November 2008). Relatively short expiration periods are common with chemical standards used for analytical calibration, owing to slow chemical reactions between the constituent compounds over time altering the composition of the mixture. In this test gas cylinder, for example, the relatively high concentration of oxygen gas (18%) will over time oxidize the hydrogen sulfide, methane, and carbon monoxide gases, resulting in decreased concentrations of all these gases, with the production of water vapor and other oxides (e.g. CO\(_{2}\)) inside the gas cylinder.

Most living things require oxygen to survive. The oxygen you breathe combines with nutrients from the food you eat to produce energy in a form usable by your body. If you are deprived of oxygen, your body very quickly shuts down, much like a fire dies when starved of oxygen (and for approximately the same reason). Ambient air is approximately 20.9% oxygen by volume, the majority of air (about 78% by volume) being nitrogen.

The oxygen content of air may be reduced by combustion (which combines oxygen with flammable substances to produce carbon dioxide and water vapor) or by displacement by a denser gas (such as propane) in a low-lying area or by any gas in sufficient quantity filling an enclosed area.

A modern oxygen sensor technology for safety applications is the micro fuel cell, generating a measurable electric current in the presence of oxygen by the oxidation of a self-contained fuel source. In many sensors, the fuel is pure lead (Pb), with the resulting chemical reaction producing lead oxide (PbO):

Fuel cell sensors are relatively rugged, accurate, and self-powering, enabling their use in portable oxygen analyzers. Due to their principle of operation, where an internal fuel is slowly oxidized over time, these sensors have a rather limited life and therefore must be periodically replaced.

An interesting and useful technique for testing the operation of an oxygen safety sensor is to exhale on the sensor, watching for a decrease in oxygen content to 15% or below. This testing technique makes use of the fact that your body extracts oxygen from the air, such that your exhaled breath contains less oxygen than it did when inhaled. Therefore, your own body acts as a crude “calibration gas” source for an oxygen safety analyzer.

LEL monitors are used whenever there is a high probability of explosive gases present in the air. These areas are referred to as classified areas in industry, and are precisely defined for safety engineering purposes. Classified areas harboring explosive gases or vapors are deemed Class I areas, with different “Group” categories delineating the specific gas or vapor types involved. For more information on classified areas, refer to section 32.1.1 beginning on page .

Gases and vapors are not the only substances with the potential to explode in sufficient concentration. Certain dusts (such as grain) and fibers (such as cotton) may also present explosion hazards if present in sufficient quantity. Unfortunately, the majority of analytical technologies used to monitor lower explosive limits for safety purposes only function with gases and vapors (Class I), not dusts or fibers (Class II and Class III, respectively).

Popular sensor technologies used to detect the presence of combustibles in air include the following:

Catalytic bead and thermocouple sensors both function on the principle of heat generated during combustion. Air potentially containing a concentration of flammable gases or vapors passes near a heated element, and any combustion occurring at that point will cause the local temperature to immediately rise. These sensors must be designed in such a way they will not initiate an explosion, but merely combust the sample in a safe and measurable manner. Like micro fuel cell oxygen sensors, these sensors may be manufactured in sufficiently small and rugged packages to enable their use as portable LEL sensors.

Infrared analyzers exploit the phenomenon of infrared (IR) light absorption by certain types of flammable gases and vapors. A beam of infrared light passed across a sample of air will diminish in intensity if significant concentrations of the combustible substance exist in that sample. Measuring this attenuation provides an indirect measurement of explosive potential. A major disadvantage of this technique is that many non-flammable gases and vapors also absorb IR light, including carbon dioxide and water vapor. In order to successfully reject these non-flammable substances, the analyzer must use very specific wavelengths of IR light, tuned to the specific substances of interest (and/or wavelengths tuned specifically to the substances of non-interest, as a compensating reference signal for the wavelengths captured by both the substances of interest and the substances of non-interest).

Flame ionization sensors work on the same principle as FIDs for chromatographs: a non-ionizing flame (usually fueled by hydrogen gas) will generate detectable ions only in the presence of air samples containing an ionizing fuel (such as a hydrocarbon gas). Of course, this form of LEL sensor is useless to detect hydrogen gas.

Hydrogen Sulfide (H\(_{2}\)S) is a highly toxic gas, with a pungent “rotten eggs” odor at low concentrations but no visible color. At higher concentrations, the gas acts as a nerve agent to de-sensitize human smell, so that it seems odorless. Its paralytic effect on smell extends to more important bodily functions such as breathing, causing rapid loss of consciousness and asphyxiation. A photograph of a safety chart (taken at a wastewater treatment facility) shows just how toxic hydrogen sulfide gas is: 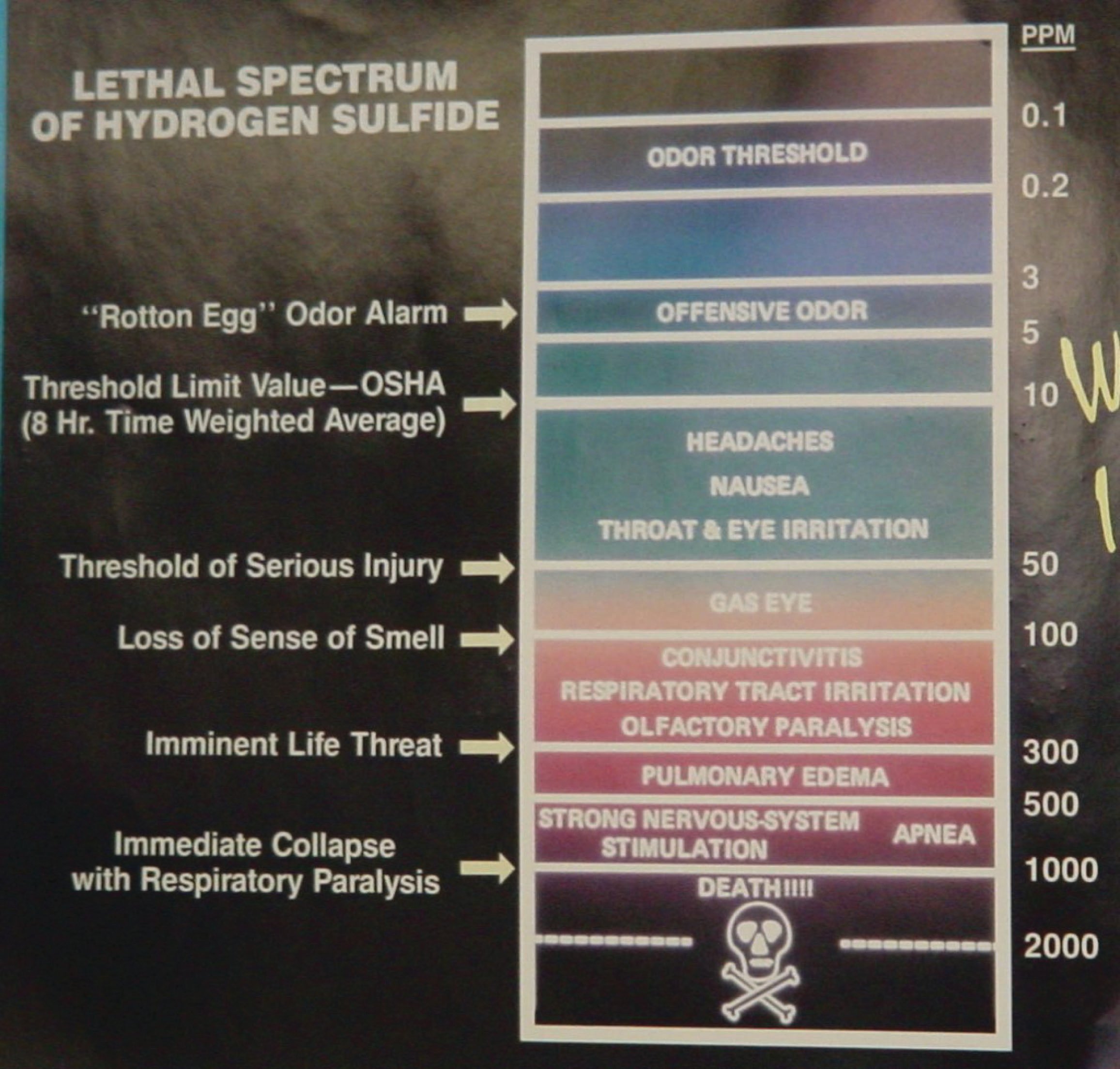 Note how concentrations in the parts per million range are hazardous, and how little H\(_{2}\)S concentration is required to paralyze one’s sense of smell. Hydrogen sulfide also happens to be flammable, its LEL value in air being 4.3%. However, the toxic properties of the gas are generally the more pressing concern when released into the atmosphere. Another hazardous property of hydrogen sulfide is its density: 1.18 times that of air. This means H\(_{2}\)S gas will tend to collect in low areas such as pits, electrical vaults, and empty underground storage vessels.

The principal source of hydrogen sulfide gas is anaerobic (oxygen-less) decomposition of organic matter. Sewage treatment facilities, pulp mills, and oil refineries generate H\(_{2}\)S gas in significant quantity, and so employees at such facilities must be continually aware of the associated hazards.

One of the most popular analytical sensing technologies for H\(_{2}\)S gas appropriate for portable monitoring includes an electro-chemical reaction cell similar in principle to the micro fuel cells used to detect oxygen concentrations. Hydrogen sulfide gas entering such a cell engages in a specific chemical reaction, creating a small electrical current proportional to the gas concentration. Like oxygen-sensing fuel cells, these chemical cells also have limited lives and must be routinely replaced.

Carbon monoxide (CO) gas is a colorless, odorless, and toxic gas principally generated by the incomplete combustion of carbon-based fuels. The mechanism of its toxicity to people and animals is the preferential binding of CO gas molecules to the hemoglobin in blood. At significant concentrations of carbon monoxide gas in air, the hemoglobin in your blood latches on to CO molecules instead of oxygen (O\(_{2}\)) molecules, and remains bound to the hemoglobin, preventing it from transporting oxygen. The result is that your blood rapidly loses its oxygen-carrying capacity, and your body asphyxiates from within. Like hydrogen sulfide, carbon monoxide is also flammable (LEL = 4%), but its toxic properties are generally the larger concern when released into the atmosphere.

Carbon monoxide is not to be confused with carbon dioxide (CO\(_{2}\)) gas, which is almost completely inert to the human body. Carbon dioxide is principally produced by complete combustion of carbon-based fuels. Its only safety hazard potential is the capacity to displace breathable air in an enclosed area if rapidly released in large volumes.

Some industrial processes such as catalytic cracking in the petroleum refining industry generate huge amounts of carbon monoxide, but these extremely high concentrations are normally present only within the process piping and vessels, not released to atmosphere. Nevertheless, personnel working near such processes must wear portable CO gas safety monitors at all times to warn of leaks.

Carbon monoxide may be sensed by an electrochemical cell, using iodine pentoxide as the reacting compound. The balanced chemical reaction is as follows:

The strength of the electric current produced by the cell indicates the concentration of carbon monoxide gas.

Chlorine (Cl\(_{2}\)) gas is a strong-odored, toxic gas used as a biological disinfectant, bleaching agent, and as an oxidizer in many industrial processes. Colorless in low concentrations, it may appear green in color when mixed in very high concentrations with air. Chlorine is highly reactive, presenting a distinct hazard to mucus membranes (eyes, nose, throat, lungs) by creating hypochlorous acid (HOCl) and hydrochloric acid (HCl) upon contact with water:

Water and wastewater treatment operations frequently use chlorine for disinfection of water. Pulp mills use either chlorine or chlorine compounds as a bleaching agent to whiten wood pulp.

Chlorine may be generated on site by the electrolytic decomposition of salt (sodium chloride – NaCl), or delivered in cylindrical pressure vessels in liquid form as shown here at a large wastewater treatment facility: 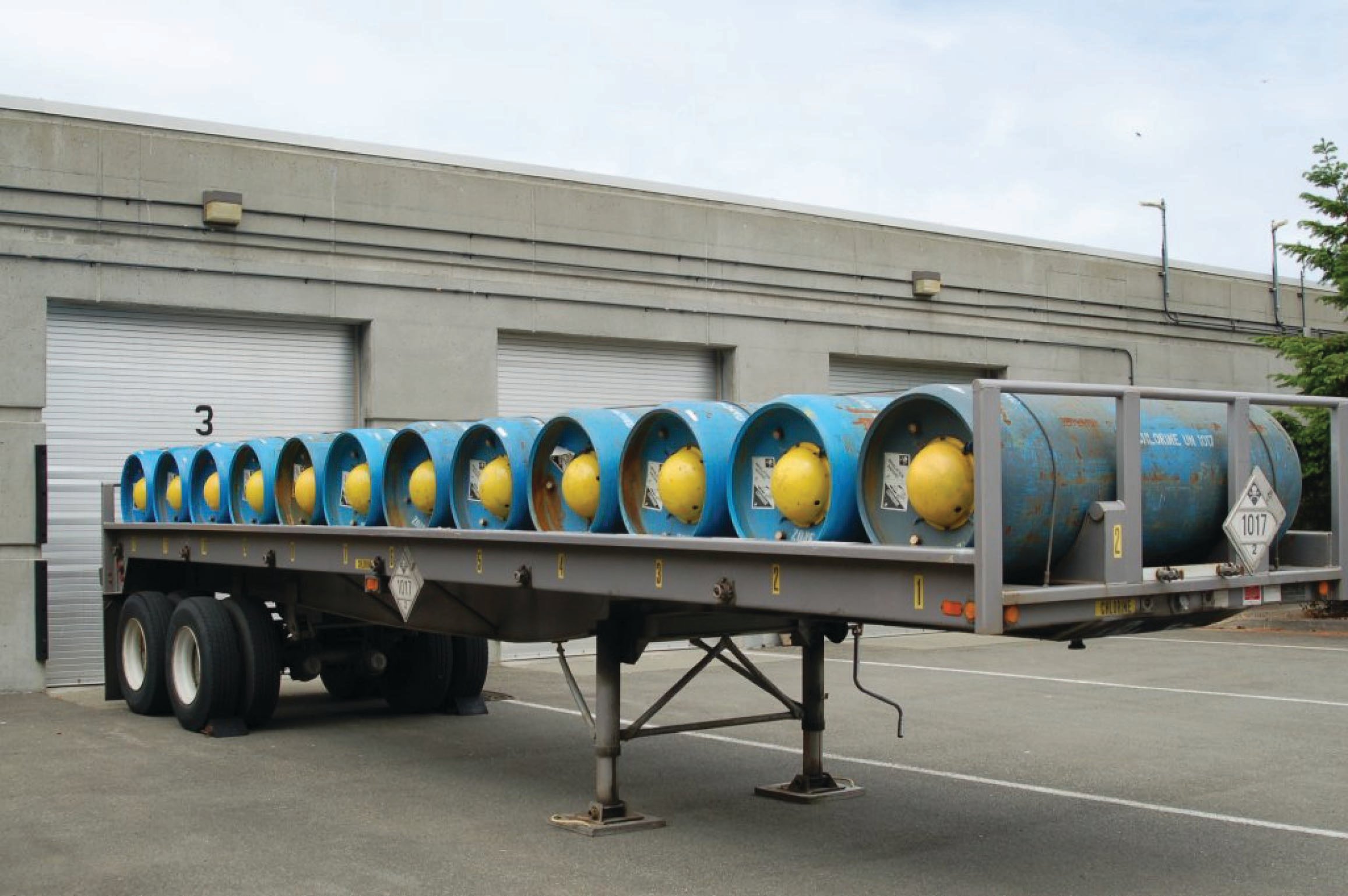