A laser is a light source emitting waves of light that not only share the exact same frequency (color) but are also in-phase with each other. A beam of light consisting of just one frequency (color) is called monochromatic. A beam of light consisting of waves in perfect synchronization with each other is called coherent. Laser light is both monochromatic and coherent. Modern solid-state lasers are constructed similarly to light-emitting diodes (LEDs), emitting light when energized with direct current electricity.

Certain types of solid-state lasers are capable of emitting light over a limited range of frequencies. That is to say, the light emitted by one of these laser types will always be of a consistent color at any given moment in time, but that color may be made to change over time. This modern class of solid-state lasers is therefore useful as light sources for absorption spectroscopy because the color of the emitted light may be adjusted to align with the absorption frequencies of certain chemical compounds.

As mentioned in the “Introduction to optical analyses” section, some molecules exhibit optical absorption over a band of frequencies (colors), and these absorptive bands are actually comprised of many fine lines clustered together on a spectrum diagram. Each line within an absorption band represents a particular resonant mode in which a molecule dissipates incident light energy in the form of heat, and these resonant modes may be highly specific to the molecular species. 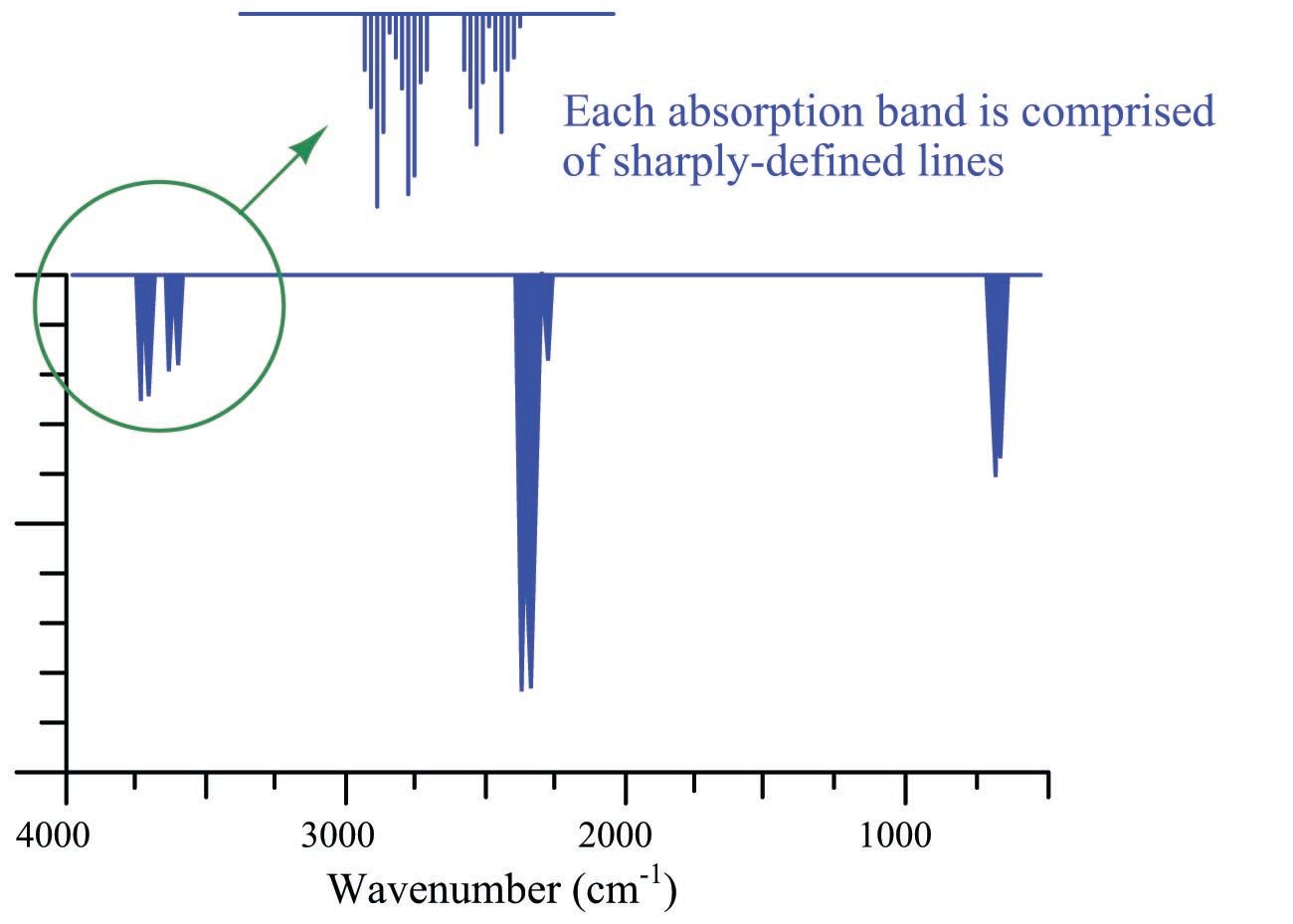 One of the challenges of absorptive spectroscopy is the problem of distinguishing one molecular species from another when their respective absorption bands happen to overlap. Laser spectroscopy avoids this problem by focusing on just one absorption line at a time, rather than attempting to measure light absorption over a broad spectrum. Even if multiple compounds have overlapping bands, a great many of the individual lines comprising those bands will be unique to each compound. A diode laser “tuned” to a single absorption line is, therefore, able to distinguish one compound from another even if other lines within the absorption band are shared by interfering species.

The frequency range of a laser diode is quite narrow, and so any spectroscopic analyzer employing this technology requires a laser light source custom-tuned for the species of interest. If multiple species having widely differing absorption spectra are to be measured, multiple laser sources will be required (each laser tuned to the very narrow range associated with each species’ absorption lines). One design of multi-laser gas analyzer is shown here:

In order for the one detector to discriminate between light received from each laser source, the sources must be sequentially energized. A computer controlling the laser sources analyzes the detector’s signal and correlates that against the known frequency emitted by each laser source at any given time in order to determine gas concentration. Like all gas analyzers, this design must be calibrated against known concentrations of gas (i.e. “zero” and “span” calibration gases) in order to establish “baseline” light intensities needed for accurate calculations of gas quantities.

A photograph of a Rosemount model CT5400 stack gas analyzer shows one possible arrangement of multiple laser diode sources, a sample chamber, and an optical detector. All-optical components are mounted to a thick plate-aluminum “bench” maintaining them in precise physical alignment with each other. The laser diode modules are colored black, while the sample chamber is red and the detector is silver. Light is emitted out of the right-hand side of each laser diode module, turning 180 degrees around the right-hand end of the bench by means of mirrors, enters the red sample chamber on its right-hand side and exits on the left-hand-side, turns another 180 degrees around the other end of the bench by means of additional mirrors, and enters the silver detector assembly on its left-hand side. The sample chamber itself contains internal mirrors forcing the light to “zig-zag” through the sample space, thereby simulating a longer sample chamber to maximize light absorption by the gases of interest: 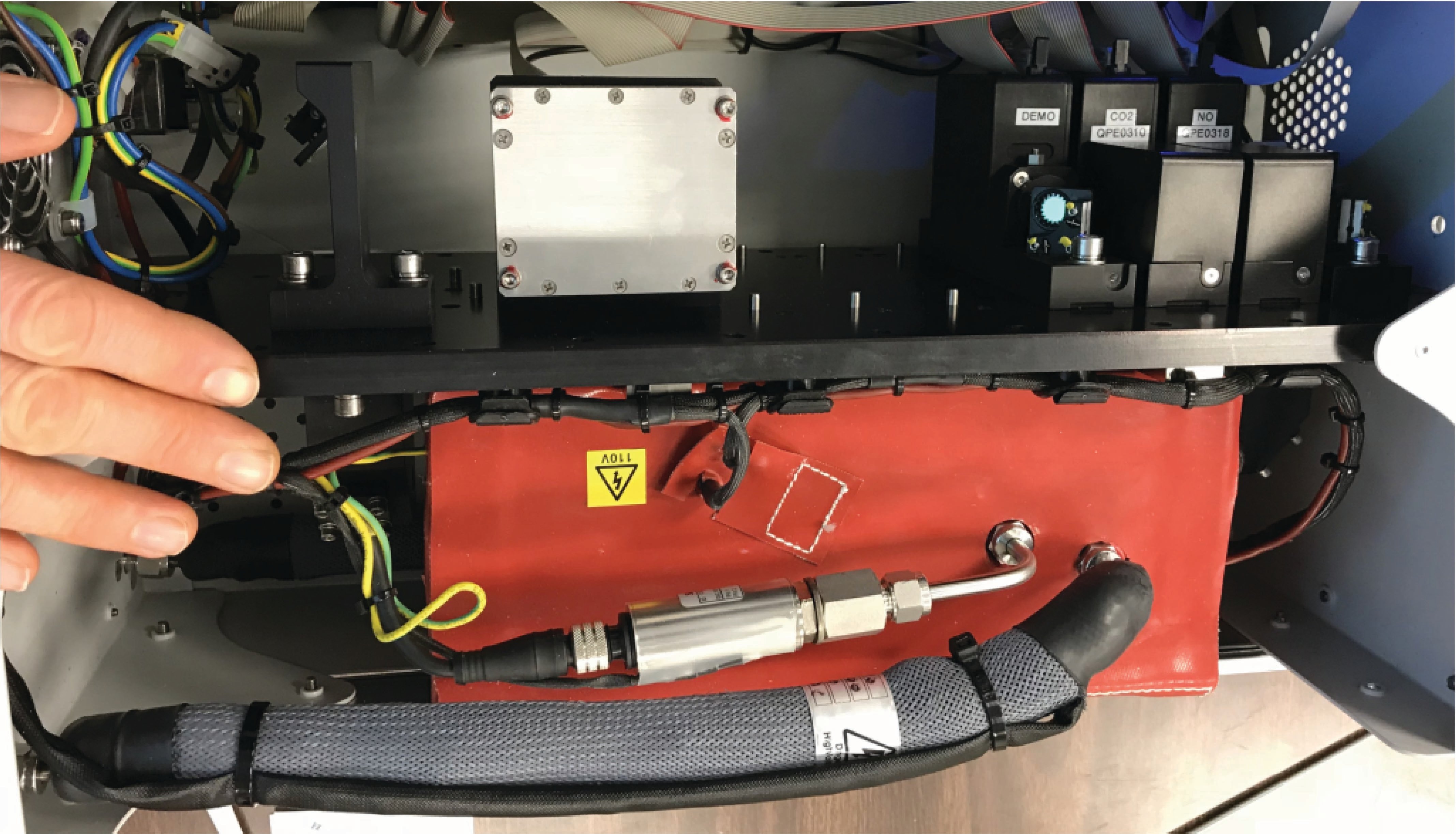 Three laser sources are shown in this photograph (with room for three more!), but one of them is a “demo” model cut open to reveal its beam-splitting mirror. The two active laser sources are marked CO2 and NO, but their frequency ranges are such that four different gas/vapor species may be measured in total – H\(_{2}\)O, CO\(_{2}\), N\(_{2}\)O, and NO: 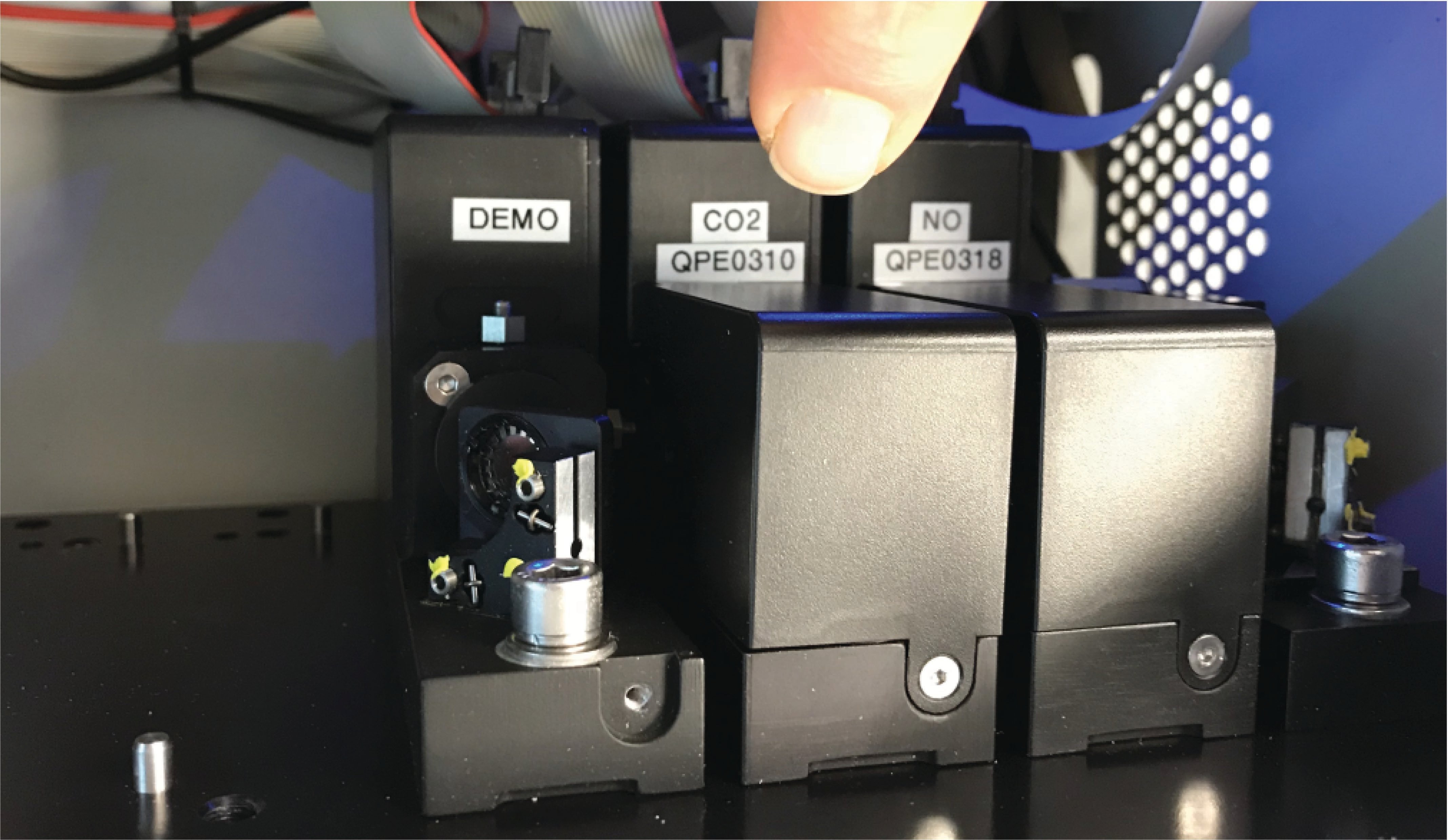 Two similar yet distinct diode laser technologies have been applied as light sources for absorption spectroscopy: tunable diode lasers (TDL) and quantum cascade lasers (QCL). The output frequency of a tunable diode laser is adjustable by varying the amount of electric current through the laser or by varying the temperature of the laser’s diode junction. Typically the temperature is maintained at some constant value and the light frequency is modulated electrically because this allows for much more rapid adjustments of light frequency. Quantum cascade lasers operate a bit differently: when powered, the internal heating of the laser structure causes its light frequency to naturally “sweep” over a certain range without any external modulation. With either technology, the basic measurement principle is the same: shine the light from one of these lasers through a sample chamber containing a gas mixture, and measure the intensity of the laser light received at the far end of the chamber. That light intensity will attenuate every time the laser’s frequency aligns with an absorption mode of gas molecules within the light path and will return to full value when the frequency drifts away from resonance. That time-domain signal is received by a light sensor, then electrically sent to a microprocessor for analysis. The results of that analysis indicate the concentrations of light-absorbing gas molecules within the sample chamber.