A Defense Advanced Research Projects Association (DARPA) program recently monitored methane emissions in the industrial sector. While many think of DARPA as a defense technology agency, many of its technologies can benefit civilian, industrial, and scientific projects.

The Spectral Combs from ultraviolet (UV) to TeraHertz (THz), or SCOUT project, used spectral analysis to search for trace elements in jet exhaust and scan for dangerous biological agents during a terrorist attack.

DARPA reapplied this technology to the petroleum and natural gas industries, where the SCOUT detects methane and other harmful emissions from local wellheads and petroleum processing facilities.

While optical spectroscopy has been used for various detection and characterization applications in a laboratory, SCOUT is unique. It scans across a broad spectrum and is designed to be used outside of the laboratory. SCOUT “combs” through the electromagnetic spectrum from the UV range into the THz range with discrete frequency steps. The finer the steps, the finer the “teeth” on the comb. 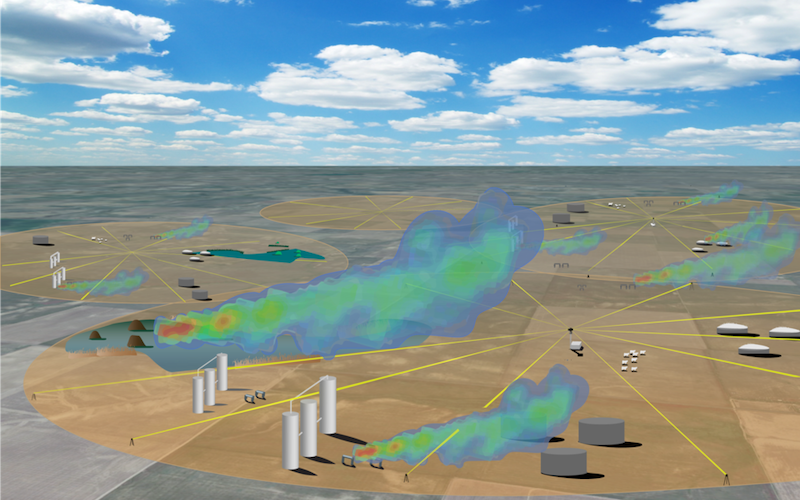 Laser light from the spectrometer passes through a gas cloud to detect leaks and emissions rates. Image used courtesy of NIST

Because it is designed for the real atmosphere, not a controlled laboratory setting, it must also be capable of subtracting out background spectral noise to identify the chemicals of interest without interference. Subtracting out the background noise was one of the more challenging aspects of this project.

The DARPA SCOUT is built on the back of another DARPA project, the Program in Ultrafast Laser Science and Engineering (PULSE). Because of the speed of diffusion of chemicals and biological agents, SCOUT must accomplish all of these goals rapidly, instead of collecting data for analysis later. PULSE made this rapid detection possible.

Recently, researchers at the University of Colorado Boulder tested and improved the SCOUT system, adding a dual-comb method, and then reapplying it to detect methane. Follow-up funding from the Advanced Research Projects Agency-Energy (APRA-E) and a partnership with LongPath Technologies expanded the SCOUT project into the industrial sector. The Air Force Research Laboratory (AFRL) also announced additional funding for this project, recognizing its leap ahead of existing detection technologies.

A DARPA SCOUT monitoring facility near an oil and gas production field in Oklahoma. Image used courtesy of DARPA

One of the major uses in the oil field will be detecting methane leaks. During processing, stray, leaking methane can be difficult to detect. SCOUT can be deployed to identify such leaks, as well as determine their severity. This information can then be used to fix the leaks and minimize the environmental impact. One recent field test was able to detect a 43 million cubic foot leak over six months.

LongPath Technologies says SCOUT will soon be deployed over the 600-square-mile Permian basin, which requires many wellheads, each of which is prone to leaking.

In a recent news release, Anne Fischer, program manager of DARPA’s Defense Sciences Office, stated, “The results from SCOUT are already paying dividends in applications for the military, other federal agencies, and commercial industry.”