The team created a machine dubbed RE-INVENT that could modify the CPAP devices to filter air both ways, rather than only in inhaling. The design was developed by Tom Burch and Michael Zabala, students at the Samuel Ginn College of Engineering’s Department of Mechanical Engineering, and Hayden Burch, a second-year student in mechanical engineering. 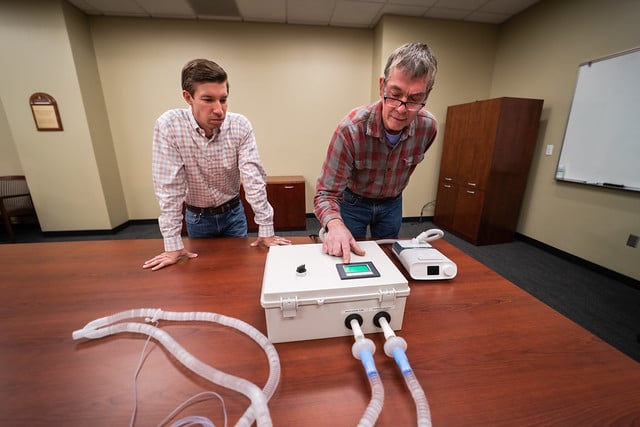 To tackle the global shortage of ventilators used to provide support to Covid-19 patients, the RE-INVENT team started their research with the goal of building one that would cost under $300. For context, most hospital-grade ventilators cost $25,000, so the team quickly realized it would be hardly feasible to build a ventilator on such a limited budget.

It was then that, building on their knowledge of CPAP machines, the team started working on RE-INVENT. Essentially, CPAP devices work in a similar way to ventilators. While the former helps people with obstructive sleep apnoea breathe more easily during sleep, however, they don’t filter the air that is exhaled through the mask. When thinking about building ventilators then, this issue had to be tackled, as exhaled air from an infected patient could potentially infect others.

In order to solve this issue, the team developed a first RE-INVENT prototype integrating two electrically-actuated valves for breathing control and an additional valve to blend additional oxygen with the air. The engineers then built on the success of the first prototype and added an Arduino board to the design to enable rapid testing and adjustment.

Through the expertise of industry controls engineer Jim Chapman, this design was improved even further with the addition of an AutomationDirect CLICK programmable logic controller (PLC) as a replacement of the prototype board. 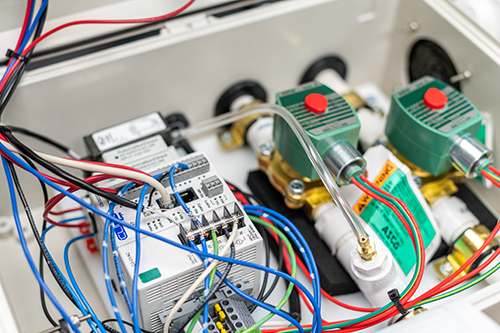 The team then implemented another component from AutomationDirect. By adding a C-More human-machine interface (HMI) to the RE-INVENT prototype, users would be able to interact with the automation more easily. This, in turn, would translate into a more intuitive way of making adjustments such as regulating the I/E ratio.

LC and HMI were not the only components the Auburn team purchased from AutomationDirect to build RE-INVENT. Power supplies, circuit breakers, zero-cross relays, terminal blocks, DIN rail, wire, and cables directly were acquired in large quantities and delivered in a short span of time, to maximize the development efforts. AutomationDirect also reportedly assisted the Auburn team throughout the final stages of the development process both through customer service and technical support.

Through this partnership, the University managed to develop a device that is already potentially capable of saving lives. The overall cost of the components for RE-INVENT, excluding the CPAP machine, ended up being around $950. More than the $300 the engineers were looking at when they started this project but still a fraction of what a professional ventilator would cost. 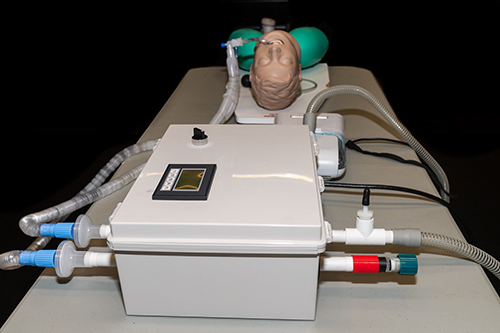 The Auburn team has completed tests of this machine on a simulated lung apparatus first, and then on an anesthetized male Boer goat. At the end of the test, the goat regained consciousness and was verified to be healthy and fit, setting a precedent for use in hospitals. Before that becomes a reality, however, some more tests need to be carried on, particularly around optimizing and regulating maximum and minimum pressures during operation.

Auburn University has currently assembled 12 RE-INVENT devices, with IS4S building an additional 89. Zabala and Burch are now looking for appropriate approvals for the machines’ deployment.  In the meantime, you can watch a series of videos by the engineers illustrating the development of RE-INVENT.