Doosan Robotics, a leader in industrial and collaborative robotics, recently expanded to the Americas, showcasing new robots at Automate 2022 and demonstrating innovative interactions between humans and industrial machines.

Known globally for its collaborative robot line, Doosan has recently announced a new expansion of the Doosan Robotics business unit that will focus on servicing and selling robots in different industrial markets. This division will be located in Plano, Texas and will serve North American and South American customers. Along with the announcement of Doosan Robotics Americas, a new line of collaborative robots is being added to the existing product line that promises some new, innovative ways to bring humans and industrial machines closer together. 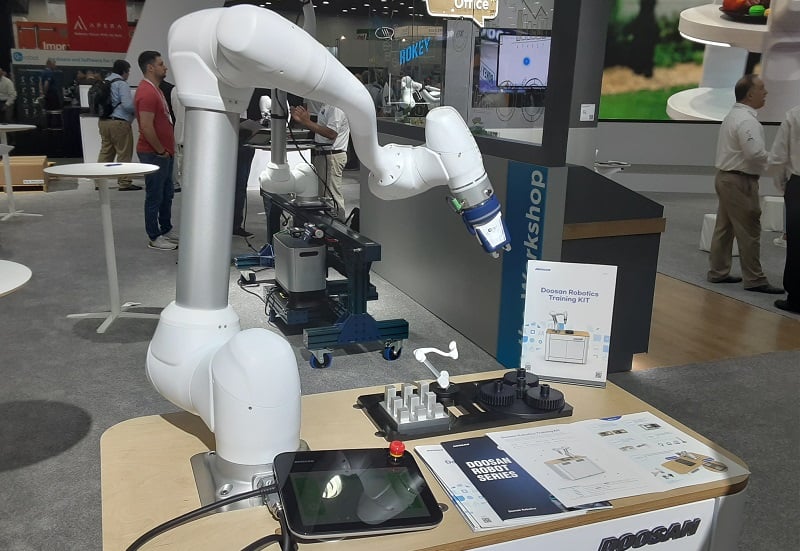 Collaborative robots are similar to standard 6-axis industrial robots with a few changes in order to adhere to specified safety regulations. Doosan has designed smoothed linkages with rounded edges and fully enclosed motors to decrease pinch points and other hazards. Another fundamental difference is speed, which is much lower than for typical industrial operations. Finally, Doosan’s programming software uses a graphical interface to program paths and functions, intentionally more user-friendly than the structured text programming language used for most standard industrial applications.

Collaborative robots are becoming more popular than ever before, and some of the reasons are that the technology is advanced to the point where virtually no safety devices are needed and no previous programming experience is required. Some cobots are even being placed inside restaurants to work alongside human cooks. Doosan, who already has experience building and selling collaborative robots, has now released a line of closer-to-consumer (C2C) robots. These robots are specifically designed to work alongside humans in the food and beverage industries, entertainment and content creation, at home, or even at the office. Doosan claims these robots are safe to interact with humans and are user friendly. 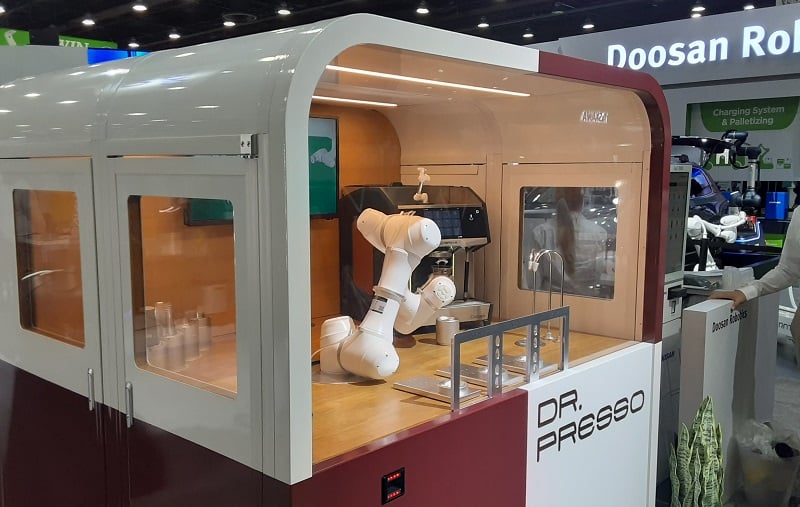 Doosan’s DR. PRESSO, a cobot cell which served Automate visitors with a hot cup of coffee. Image provided by Control.com

With the C2C robot line, Doosan hopes to corner an emerging market where cobots are being used to perform repetitive tasks that humans have been doing for decades. One such example is a robot cafe. A single collaborative robot arm can easily grab cups from a stack and place the cup under a coffee dispenser or a milk frother. With minimal safety requirements on cobots, humans can perform other tasks while the robot is working. 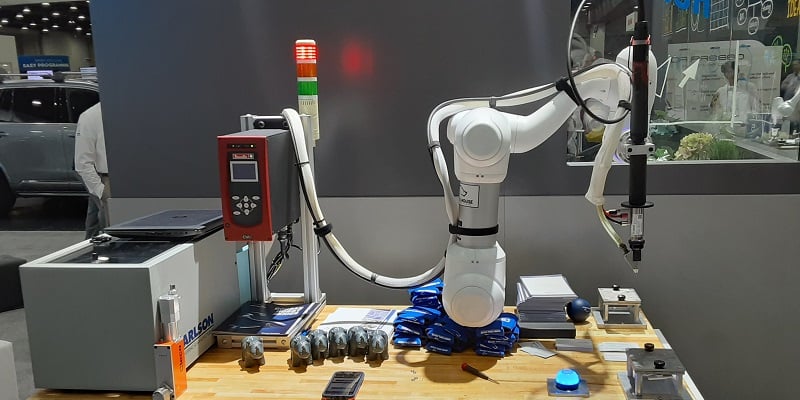 Among the industrial applications of Doosan cobots were palletizing, CNC tending, and this screwdriving system. Image provided by Control.com

Film and television are starting to make use of robotics to capture more smooth, natural panning and zooming action shots. Doosan has a cobot model called NINA which is a collaborative robot with a professional camera mounted on the end of the robot arm. The whole structure is mounted on a movable base so that the robot can be easily wheeled into position. The NINA system will sense objects or people and automatically adjust its position, capturing smooth and consistent shots. The NINA system even has simulation software specifically designed to assist with determining camera angles before talent arrives on the scene.

Cobots are becoming more a part of our daily lives as they take over repetitive or even dangerous jobs. While it might seem like the industrial robot is stealing jobs from people, the collaborative robot is designed to work with humans and allow humans to become more productive.