Faulhaber looks to reduce the anxiety of integrating bulky encoders with its newest motor system.

Faulhaber recently expanded their BXT motor series with an integrated encoder for flat motors. The new products allow engineers to incorporate a brushless DC motor with a 7mm rotary encoder.

Let's take a look at the device and consider why rotary encoders are important in industrial processes—and what makes this new motor noteworthy.

Faulhaber's BXT motor family consists of miniature brushless DC motors that incorporate a rotary encoder. Integrating an encoder into a motor can present several challenges, including the prospect of significantly increasing the size of the motor in the process.

Faulhaber aims to mitigate this particular issue with the BXT family by only adding an additional 7mm to the existing motor housing. 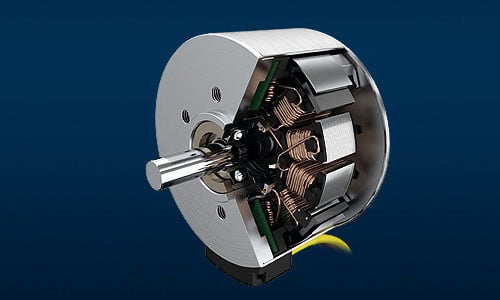 A rendering of an example family member from Faulhaber's BXT line of brushless flat motors. Image used courtesy of Faulhaber

The new encoder used, the IEF3-4096, is a magnetic encoder that provides 4,096 lines per revolution, making the position resolution of the motor 0.08°. The encoder can operate at a maximum frequency of 875kHz, operate on a voltage between 4.5V to 5.5V, and work in temperatures between -40°C to +100°C. 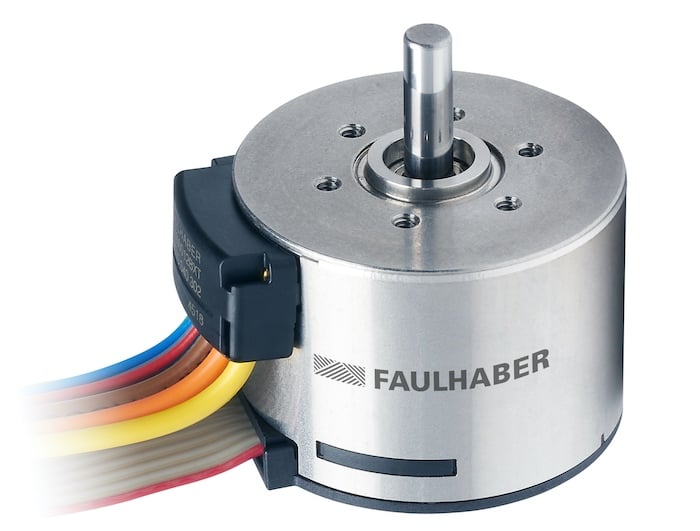 The short length of the motor and its high precision rotary encoder makes the BXT family suitable for precision engineering tasks including robotics, medical technology, laboratory automation, and several forms of industrial automation.

Where Are Encoders Necessary?

Stepper motors play a key role in the world of automation as they allow computers to accurately control the positioning of anything connected to the motor, whether it be a tool, item, or sensor. But while stepper motors allow for computers to provide specific stepping instructions to move a motor n number of steps, the motor itself cannot tell the computer where exactly the motor is. This is why many basic systems such as CNCs use homing sensors whereby the computer will tell the motors to keep stepping until they reach the axis limits. From here, the computer can reset its coordinate system and then any steps from here will be determined with respect to the origin.

While this is acceptable for basic systems (such as DIY PCBs), it is not sufficient for precision engineering needed in industrial settings as the computer will not be able to register missed steps or motor stall. (Note that this is somewhat possible with the use of current measuring in the motor, but this can be complex and difficult to implement.) In these situations, an encoder is required as they are devices that record absolute position.

There are multiple types of rotary encoders with the simplest being a hall sensor and a magnet connected to the shaft. However, the resolution of the encoder depends on the number of magnets on the shaft, which can be very few (90 degrees). This means that the computer will only be able to measure quarter turns on the shaft.

Other encoder types involve metal contacts on a rotating disk which are mounted at the end of the shaft (or to a geared pulley using a timing belt). These are often practical selections as they can have many positions and yield more preferable resolutions. Many rotary encoders are separate from the motor, which can be inconvenient. This is where encoders like Faulhaber's IEF3-4096, which enable a motor that incorporates all of this into a single package, may be attractive.

The expansion of automation comes with an increased need for precision motors. It seems like a safe bet that these motors with integrated rotary encoders will become the norm. Applications that require high resolution in a compact design will be the biggest beneficiaries of such motor systems like the BXT family.

The question that now remains is how will encoder technology change in the coming years to adapt to new demands? How accurate will industrial systems require their motors to be as we move forward?