Siglent is an engineering company that designs and manufactures test equipment and power supplies. The company was founded in 2002, and its first products included digital oscilloscopes.

Since 2002, Siglent has continued R&D efforts in test equipment, which has led them to develop other products, including handheld oscilloscopes, waveform generators, power supplies, multi-meters, and spectrum analyzers.

Siglent has expanded its product and research categories to include hardware, software, industrial designs, testing environments, and laboratories.

Recently, Siglent announced their latest power supply range, the SPS5000X. This range provides engineers with different options and configurations to help them with their power generation applications.

The new series of DC power supplies come in a range of different powers, including 360W, 720W, and 1080W. All of these can be combined in applications that require increased power. Power supplies can provide output voltages between 0 to 320V and current outputs of 0 to 270A.

While each power supply in the range offers different ratings and they all use the same underlying software and interface. This may enable engineers to combine multiple power supplies and only requires them to learn this process once.

The SPS5000X range also has multiple access ports located at the back of the unit. These include an analog port and LAN connection. The LAN connection enables the power supplies to be controlled over a network, and an internal server hosted by the power supply enables in-browser programming and control.

The SPS5000X range support arbitrary output patterns of up to 50 steps, with each step having a user-defined output delay, duration, and slew rate.

Practical Applications of the SPS5000X

The SPS5000X is designed for engineers in a test bench environment due to its use of LAN for remote programming. Users can utilize any browser to program the unit to integrate the SPS5000X into their custom environment.

The use of an OLED with a wide viewing angle of 170 degrees also makes the DC power supply range tailored for applications that require monitoring over large distances. For example, a large test rig that integrates multiple displays can install the SPS5000X range further away from the main area of focus as the display is still readable. 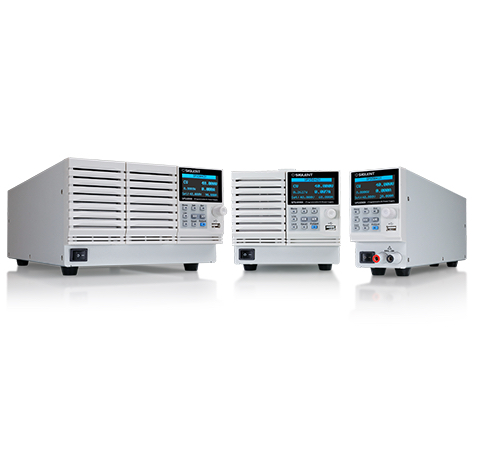 This DC power supply range can also power-sensitive electronic setups. While the range offers large power outputs of up to 1080W, it can still be used for small devices undergoing tests. For example, the various protection systems integrated into the supply (such as overvoltage, over current, LPP, and OTP) can help to protect prototypes from damaging the power supply or itself.

The use of 50 step power sequencing with various time delays and periods is used for testing devices such as FPGAs and other complex semiconductors. Unlike other microcontrollers, such devices require careful power-up sequences that users must follow.

The SPS5000X may provide sequencing to ensure engineers that their designs are functioning as expected when given the correct power sequence.