Networked remote I/O allows us to work with a machine center separately from the rest of the system, and drop the solution right in place.

If you are worried about the distance between machines or the age of an old machine becoming a hindrance to bringing your operation into the 21st century, don’t worry.

Computer networking technologies mixed with some industrial electronics ingenuity can save your valuable time and hardware costs.

If you were given the option of sitting down to design your ultimate machine operation, you would add in every modern convenience, every networking option, and every high-efficiency device available on the market. While that sounds great today, wait a couple of decades and today’s ‘modern’ becomes tomorrow’s ‘old tech’.

How can you plan for the future, when you don’t even know what will exist? You can avoid this if you design it to be modular.

If you are faced with the task of bringing old equipment up to modern specs, you’re probably looking back on last century tech with the same thoughts - why did they build it this way? 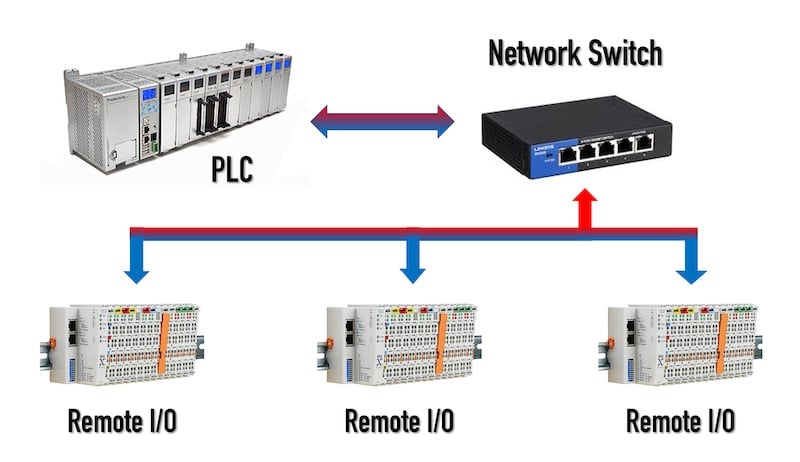 The typical structure of a remote networked input/output system.

There is no way that you can predict twenty, forty, or fifty years into the future to make life easy for the next engineer by planning a system upgrade. But you can make it easier for them now. How do you do this? Design it to be modular.

The natural inclination of electronic technology development is to examine the demands of a machine and give each input/output device its own set of wires. Those wires trace back to a controller for the system as dictated by a ladder schematic illustrating the entire machine center in impressive complexity. But wires come with a few major disadvantages.

First, long distances of wire create voltage drops that can render a signal unreadable. If you need 24 volts at a remote location, you don’t have the option of delivering that signal a couple of hundred feet away. The option, therefore, is to install a control system local to the machine and allow it to communicate with the other systems down the line.

The second main disadvantage is the complexity of wiring. Anyone experienced with wiring harnesses used to connect real-world control devices can relate the headaches and frustrations that come along with a single failure in the wiring. Although the devices may be less expensive, the time it takes to integrate these devices with the rest of the system, and then to locate and solve failures later can be a heavy cost burden.

So, for direct wiring of a machine, we see the need of having a control system onboard the machine, or complex control wiring allowing it to connect with the rest of the system. Neither are favorable options to the technicians who will be servicing the machine in future years.

Nothing makes an engineer or technician happier than a machine that costs less to install, works better than the old machine, and is easier to operate and repair than the previous installation. That seems too good to be true - until we recognize the incredible power of computer networking.

Networking cables are capable of sending complex streams of data over 300 ft in the case of standard network cables, and much longer in the case of fiber optic. Complex combinations of digital and analog input/output data can be sent over hundreds of feet very quickly. The concept of remote I/O is simply to place a distribution point at the end of these network cables which can collect sensor signals, then transmit them over the network to a single processor. They can also receive commands from that center processor and complete tasks of their own. 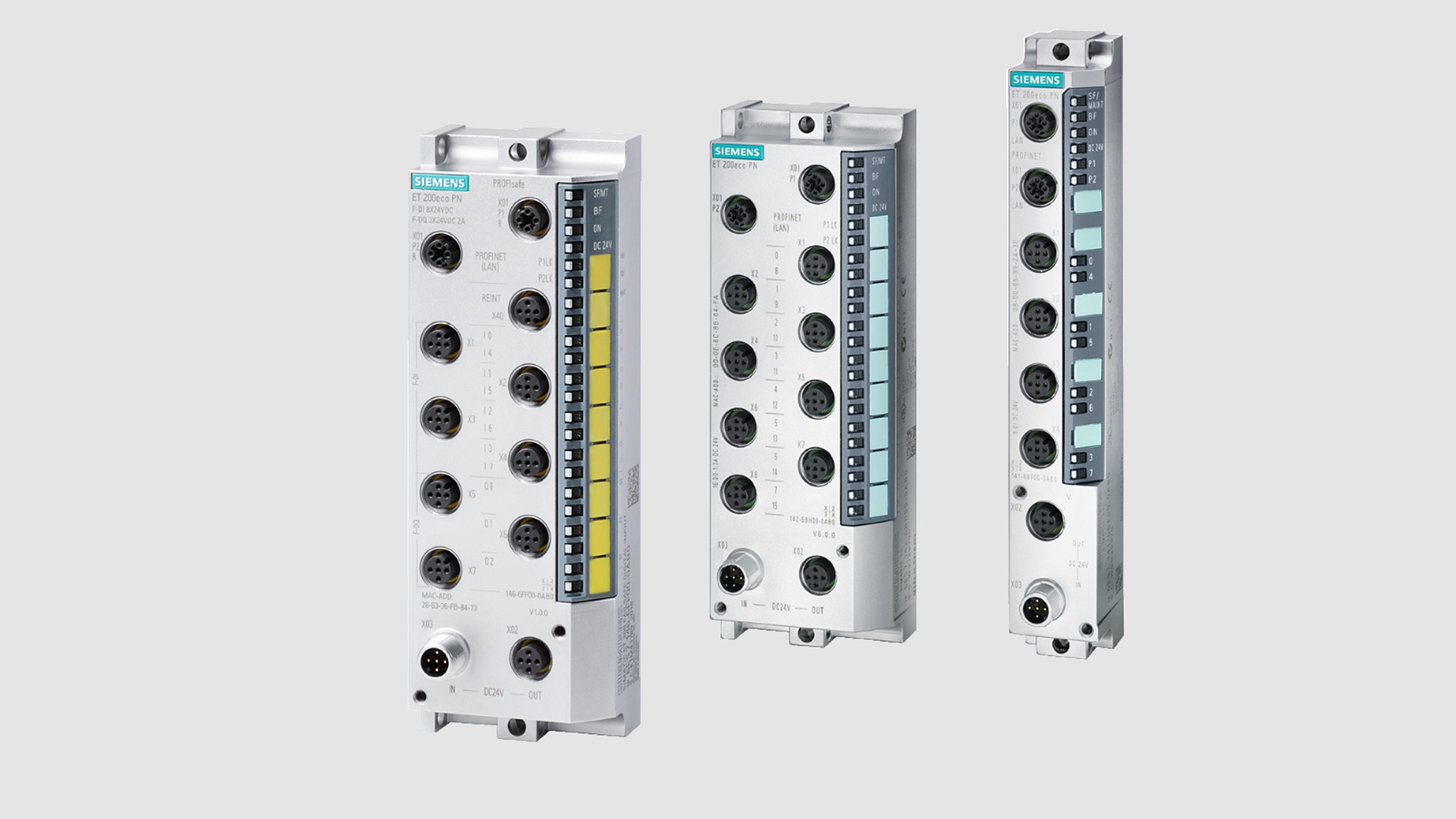 Siemens ET200 series IO which can be mounted on a machine without a cabinet or enclosure. Image used courtesy of Siemens.

This capability allows us to build a giant network of sensors and output devices, and operate them over long distance network cables, all being operated from a single central processor.

An important consideration would be to establish a very consistent addressing system that assigned each group of machines with its own set of network addresses (IP Addresses for an Ethernet system). This allows the technicians to track down problems very quickly based on device address, and also allows rapid deployment of new machine centers simply by adding another network distribution point and set of network addresses. Establish that new single network connection with a cable, and the entire machine center is operational - rapid deployment!

The first requirement is a process controller or programmable logic controller with a network connection. A remote I/O network can only send and receive information, it can’t make any decisions. Think of this as trying to use a keyboard without attaching it to the computer. The keys are pressed, but without the computer to process anything, the button pressing won’t do anything useful.

In a similar manner, I/O networks will only operate with the main controller to handle the logic programming.

Usually, this will be a PLC with an Ethernet or a DeviceNet connection. Each of the Network or Remote I/O devices will consist of the network cable incoming, with a number of wiring points for the sensors and relays and other I/O devices.

Sometimes only half a dozen of these ports, but other times it may have over 100 points, depending on the scale of the machine. Usually, these ‘points’ will take the form of screw terminals for +24v, GND and the signal, where other times they might be a 5-pin Quick-Disconnect cable terminal. 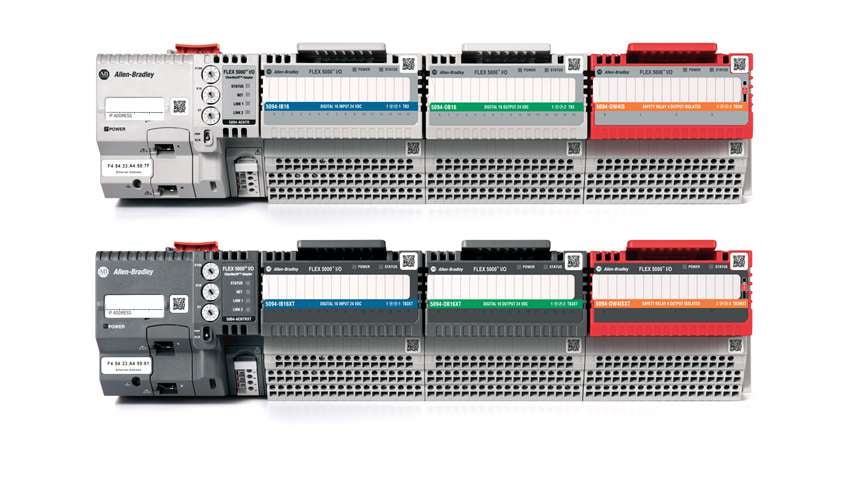 Adding the I/O Devices to the Project

The exact method for adding the devices into the project will be up to the hardware manufacturer and the software for the PLC. Usually, the only required information is the IP address of the remote I/O hub as well as the information about each terminal - is it an input, or an output.

With this information, you add the device into the project, then each terminal is accessible with its own address, just as easily as if it was connected directly to the PLC itself.

Many times, it can be possible to add an entirely new machine center into the operation with the only software change being a few lines to activate a new sub-routine of programming. Apply power to the machine center, connect a network cable, and the new devices are operating as intended.

Even if this new hardware doesn’t include an entirely new machine center, the concept of remote I/O can still make a major impact in your operation.

Imagine adding a PLC with a network connection to the engineer’s office. Out on the floor, add a network I/O hub to each machine with a single sensor giving the status of each machine. With just a glance, the engineer can see the production of each machine, the trends of the past day and month, and can calculate the exact costs of downtime and maintenance for each machine over a given time span.

With this new information, the engineer can give priority to the maintenance of each machine and can predict when to take corrective action to prevent failures.

The future of automation challenges us to design with flexibility and expandability in mind. With powerful computers running a process, we no longer need to devote a separate control system for each machine. Networked remote I/O allows us to design a machine center separately from the rest of the system, and drop the solution right in place.

It can also be used to upgrade and add I/O into existing systems for far less cost and difficulty than ever before.

How do you use networked remote I/O?