Sumitomo has created a wheeled, wall climbing robot for undertaking tasks on curved steel structures. The new development hopes to see use in welding, maintenance, and other industrial tasks.

Japan-based company Sumitomo Heavy Industries recently announced the development of a steel-wall traversing robot to be used in welding, maintenance, and other industrial tasks. The robot is not only capable of scaling vertical steel walls through magnetic adhesion, but can also climb curved steel surfaces—a feat not yet achieved by other wall-climibing bots. 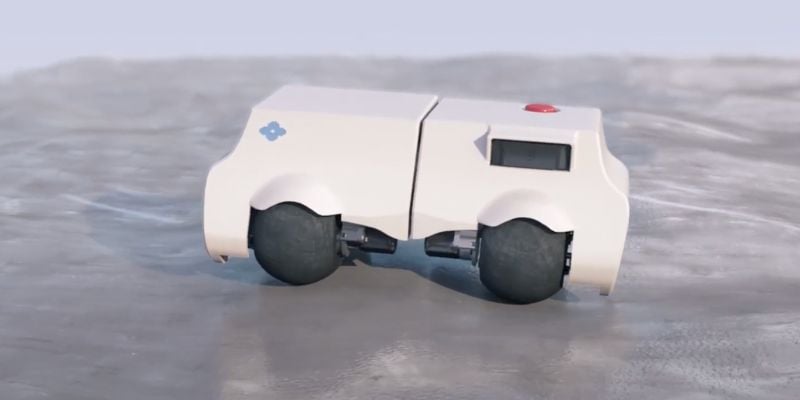 Sumitomo has developed a wall climbing robot for executing tasks (such as welding) on large curved steel structures. Image used courtesy of Sumitomo

Robot climbing systems that can travel across vertical surfaces are useful and important tools for undertaking work in hazardous industrial environments. Wall climbing robots can be employed across a variety of industrial applications because of the prevalence of ferromagnetic structures that require continued maintenance (such as oil reservoirs, bridges, and ship hulls). They can be used for welding, painting metallic structures, short-blasting, as well as cleaning and maintaining surfaces on buildings or ship hulls.

Wall climbing robots can reduce the level of risk for operators within hazardous industrial settings. Operational costs can also be reduced because scaffolding is not required and non-productive work can be eliminated.

The bot can travel across different wall shapes, features actuators for control, and can use tools such as a cutting torch to perform dismantling and manufacturing tasks. Welding can be executed and controlled using joint gap detection.

Such a robot could solve the complication of automating a welding process at a significant height or on an uneven surface. Workers need not be put at risk, and such difficult work can carry on unhindered to maximize operational efficiency.

Sumitomo’s wall climbing bot was developed at the company’s Technology Research Center and achieved under the Challenge Program in 2018. According to Sumitomo, the technology behind its innovative robot is based on a mechanism presented at a robotics research conference held by the Institute of Electrical and Electronics Engineers (IEEE), the 2020 International Conference on Robotics and Automation (ICRA 2020).

The company has further developed its bot to improve aspects of its design and performance. In the future, applications for the bot will include cutting, arc welding, and inspection at manufacturing sites.