What Control Technologies Does the James Webb Space Telescope Use?

What Control Technologies Does the James Webb Space Telescope Use?

The James Webb Space Telescope (JWST) has numerous control systems that must be remotely maintained accurately throughout the life of its operation.

The JWST and Its Missions

On Christmas 2021, the James Webb Space Telescope (JWST) was launched from French Guiana and is now in the early stages of its missions. JWST is a 21.3 ft (6.5 m) space telescope that will orbit the sun in a halo J2 orbit. Once fully deployed, it will collect data for analysis by astronomers and cosmologists who will investigate four main nodes:

The JWST has both optical and infrared capabilities, versus the Hubble (an optical space telescope only). As such, the JWST can detect distant heat signatures instead of collecting only visible light data.

Besides the scientific instruments, there is also the optical telescope element (OTE) with a primary and secondary mirror set, smaller telescopes for tracking stars for navigational purposes, a solar power array, a solar shield, the spacecraft bus for steering and control, and a communication system with an Earth-facing antenna for sending data back to astronomers.

With all of the interoperability between systems, instruments, and agencies, the control systems for the JWST are quite complex. Added is that a technician or engineer cannot be dispatched to the telescope for adjustments, unlike an industrial facility’s control system.

At the heart of the JWST’s navigation system is the line of sight (LOS) and pointing servo that tracks a distant star to ensure the telescope is on track. To do this with the milli-arcsecond accuracy required, the fine guidance control system (FGCS) uses a small fine guidance sensor (FGS) that sends a correction signal to a fine steering mirror (FSM).

The FSM is actuated to adjust and track the star of choice. The FGCS is updated at 2 Hz and geared to reduce oscillations and vibrations due to mechanical part movement. 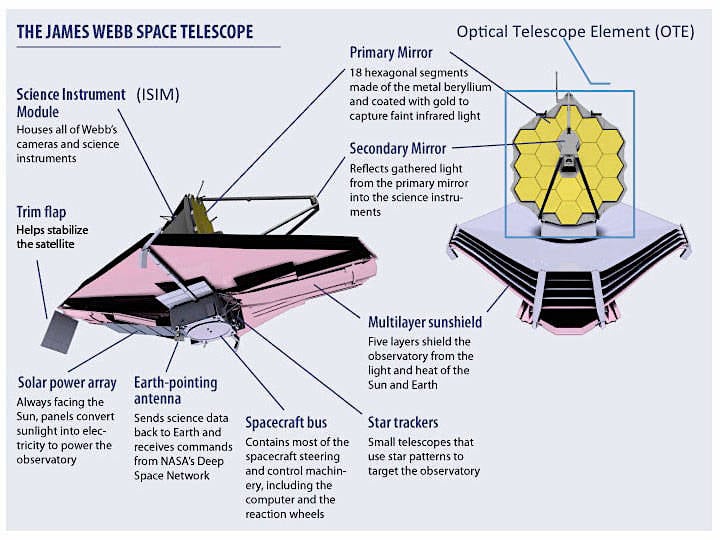 Anatomy of the JWST. Image used courtesy of NASA

As a guide star moves, the JWST can determine its position and autonomously adjust its course to remain in the proper orbit. It uses a closed feedback loop to perform this, where the error signal (how much the star has moved) is factored into the adjustment routine to change the FSM’s position (and not lose the guide star) as well as the JWST course.

Besides the FGCS, the attitude control subsystem (ACS) is designed to handle any slew maneuvers, thrust vector pointing, momentum unloading, antenna directing, emergency backups, and other such systems. Everything from deploying the sun shields to improving communication with Earth is directed through this element.

It’s one thing to design a control system for a factory on Earth, where a technician can be deployed to fix any problems that arise. It’s another to design an entire system meant to be hurled through space, currently 600,000 miles away, and be able to investigate the earliest components of the universe. Systems must be reliable and remotely accessible.

What do you think about these advanced control systems?