An Introduction to Track Conveyance Systems

An Introduction to Track Conveyance Systems

What are track conveyance systems, and how are they different from traditional belt conveyor systems?

The tracking is done through the servo motor system and an optic or RFID tagging system. The accuracy of a typical linear servo track system is around 0.100 mm (0.0039 in). This accuracy can be improved with additional encoders mounted on the track and the shuttle.

A belt conveyor is prone to wear, requires scheduled maintenance, and is typically not very fast. The belt is usually driven by an asynchronous motor with a VFD (variable frequency drive), meaning the conveyor is rather on or not, but can also be driven with a servo for accurate positioning. 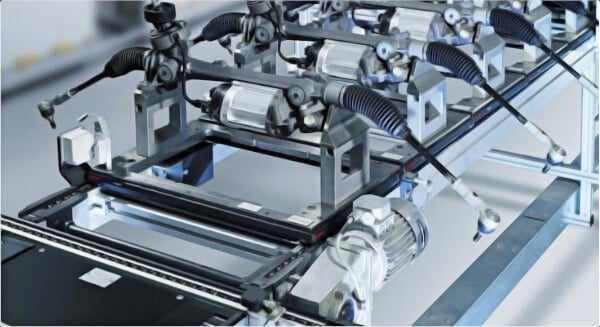 Part tracking requires RFID tags on the pallet or some other way of tracking which pallet is in which station or location.

On a basic level, an electric motor has a shaft with an armature and the shaft rotates within a stator. The stator is made up of permanent magnets or electromagnets and stays stationary through the process. The armature on the shaft interacts with the magnetic field produced by the stator. As these components interact with each other’s magnet field, the shaft turns.

A linear servo works much the same way. The shuttles have a permanent magnet and the track sections have electromagnets that can be controlled for polarity. When a shuttle is commanded to move, the track control system will start to switch the polarity of each coil to push the shuttle along the track. So, the shuttles work in much the same way as the shaft in an electric motor.

A track and conveyor system are very different from one another. While both transport parts throughout a machine or plant, a track can typically do it faster and with greater precision. With a track, each shuttle is like an individual servo motor and comes with all the positioning and speed control that you would expect to find with a typical servo motor.

Belt conveyors can be servo-driven but will act more like an indexing table, indexing only one pallet at a time. Conveyors driven by VFDs can move pallets independently like a track, but require the pallets to slip on the conveyor belt, causing wear and constant maintenance. The limitation to a track is the payload: Track systems cannot withstand large payloads or support a perpendicular force to the top of the shuttle.

There are a few different companies that are manufacturing linear servo track systems. We’ll briefly discuss a few of the most common, such as ATS, B&R, Beckhoff, and Rockwell.

A popular one is the ATS SuperTrak. This track system uses shuttles held onto the track with permanent magnets. This track comes with proprietary configuration software, which can make integration into a machine quick and easy. Target points are taught along the track and the shuttles are commanded to each target through a programmable logic controller (PLC). 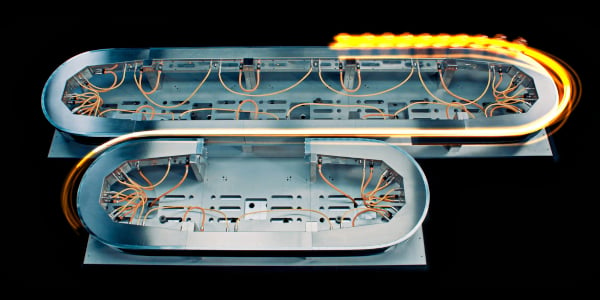 The B&R ACOPOStrack system is a lot like the SuperTrak. In fact, you can purchase the SuperTrak through B&R, and these tracks share a lot of internal components.

The system consists of electromagnet sections and shuttles with permanent magnets. A major advantage to the B&R platform is the ability to divert shuttles to other track sections. This means slower stations can be performed in parallel by having parallel tracks where engineers can direct shuttles. The B&R system is a little less accurate but is easier to maintain and assemble. This system requires programming through Automation Studio, thus there is no easy configure software if the factory doesn’t already have this program. 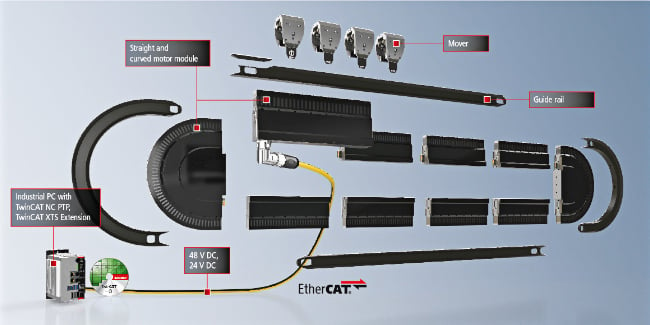 The Beckhoff XTS system comprises track sections that connect together much like the train tracks you played with as a kid. The shuttles are interconnected to the motor segments and can only be removed by separating the sections. This system also requires a linear guide support under each section.

The system cannot take any perpendicular load to the shuttles. Much like the B&R solution, the track needs to be programmed through Beckhoff’s programming software. 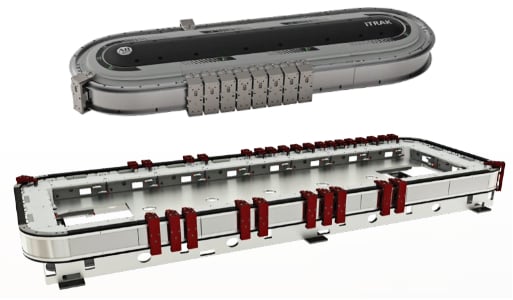 The Rockwell iTRAK solution looks to be a nice compromise between the B&R system and the XTS system. The shuttles are locked into the track but have a higher payload. The iTRAK integrates into the Rockwell Automation Studio 5000 software and can be simulated without the actual hardware.

No matter which track system you decide to use, a linear servo track is an efficient way to move parts from one station to another or from one machine to another. With the same system, shuttles can be batched together or separated out, have different motion profiles at different times, and tracking of each shuttle is easily performed via the servo drives.

These systems also have auto collision avoidance, meaning the shuttles won’t hit each other and will automatically queue behind one another. Provided the application will allow for the payload limitations, a linear servo track conveyance system will likely provide machine efficiency improvement over a typical belt-driven conveyor.