The choice of load device and transmission method often dictates what kind of control system is used, so it’s important to be familiar with the mechanical and electrical components of a system.

Understanding the differences between the two systems can help design the correct repair and maintenance methods to ensure that they remain in service as long as possible.

Gears always have an axle passing through them, or at least an imaginary ‘axis’ of revolution around which the rotation occurs. The relative alignment and distance between the two axes of revolution will dictate what type of gear is best suited for the application.

The two terms to keep in mind with gear alignment are ‘angle’ and ‘offset.’ If you imagine the two axes of revolution as infinitely long lines passing through the center of the gear along the axle, you should be able to determine their relationship.

Those two lines may be the same angle (parallel) or different, and they may also be located along the same plane in space or different (offset). Offset is like two people walking in a straight line in a building.

If they are on the same floor, they will likely cross paths. This would be zero offset, or ‘intersecting.’ If on different floors, they may cross over each other, but will never meet. This shows offset, and each floor is a ‘plane’ in 3D space. Here is a sample of some of the more common gear choices commonly seen in machines.

Same Angle, But with Offset

If two axles run parallel to each other, but with one above the other, or side by side, a Spur gear would be the most reasonable choice. This kind of gear is one of the two most common gear types to encounter. The gear itself is a round disk with the teeth cut straight into the face along the outside edge.

Many times, the motion transmission needs to change directions. In many systems, this can be accomplished with a Universal or Constant Velocity joint. If the motion must change 90 degrees, or if it must be transmitted from a single shaft into two output shafts, then the U-joint may not (or cannot) be suited for this task.

A bevel gear allows this 90-degree alignment by containing two gears, each consisting of the lower section of a 45-degree cone (also called a ‘frustum’).

The teeth are cut into the outer edge of the 45-degree face. This allows the two 45-degree angles together to form a 90-degree angle change. 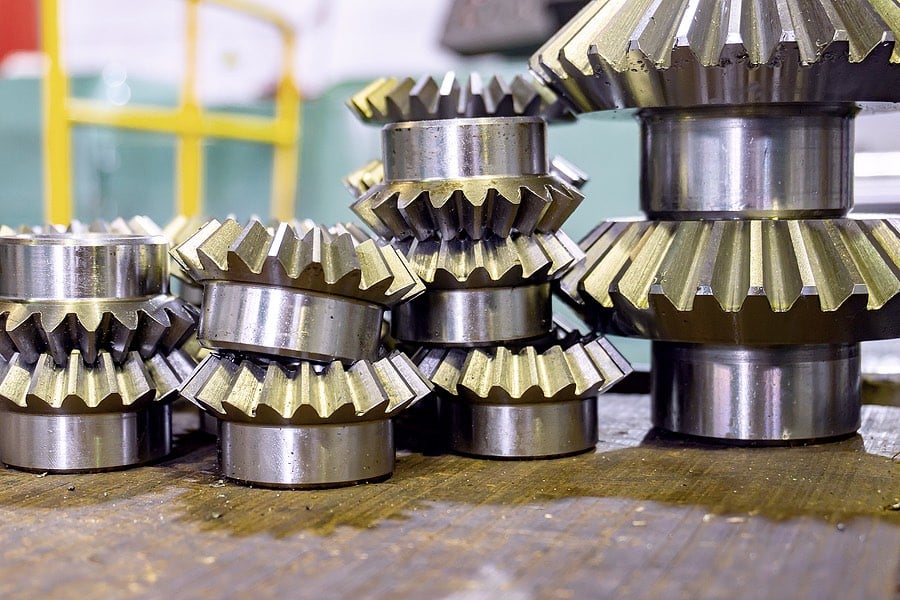 Bevel gears after manufacturing on a gear-cutting machine.

Sometimes, a custom application may use different angles, such as a pair of 22.5-degree gears to form a 45-degree bend, but this is not nearly as common. A recognizable occurrence of bevel gears would be inside a common different a rear-wheel-drive vehicle drive train.

Often the two shafts will pass directly over the top of each other at a 90-degree angle to each other. Two gear choices can meet this demand, one of them having a very particular benefit.

The simpler choice is two gears with much like spur gears, except the teeth are cut at 45 degrees across the outside face, and these are called helical gears. They may angle either direction, providing the terms ‘left-hand’ and ‘right hand’. If two same-hand gears are used together, the axes will be 90 degrees apart.

If a left and right-hand gear are used together, the shafts will be parallel just like a spur gear. With the angled teeth, it can provide less noise and vibration since there is never a gap in the contact area. The other type of gear for this scenario of 90-degree alignment is called the ‘worm’ ger set. 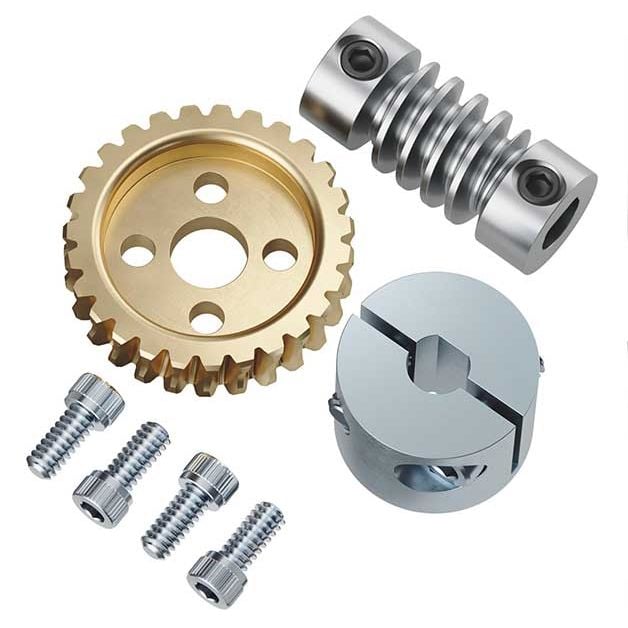 One gear resembles a screw with a large wrapped tooth, always on the input shaft. The output is a gear with a slight angle in the teeth matching the worm gear profile.

The output shaft will rotate very slowly, but with tremendous rotational force. This is found in all sorts of settings when a high-speed motor is meant to drive a low-speed load device, but with much greater force.

Pulleys with rubber belts are also very familiar, especially in vehicle systems. Nearly every car has a rubber v-belt or serpentine belt driving the pulleys in front of the engine.

For a belt system to run properly, the two (or more) pulleys should ideally be perfectly in line with each other, or in other words, the axes of revolution should be perfectly parallel. If not, the life of the belt is greatly reduced, and there will be more vibration.

There are mainly four distinct types of belts used for various scenarios:

V-belts have a trapezoid shape, running inside a pulley with a V-shaped profile. The friction of the belt at high speeds allows motion transfer over a long distance. If one pulley becomes locked up, the motor may still rotate which can prevent a catastrophic motor failure. 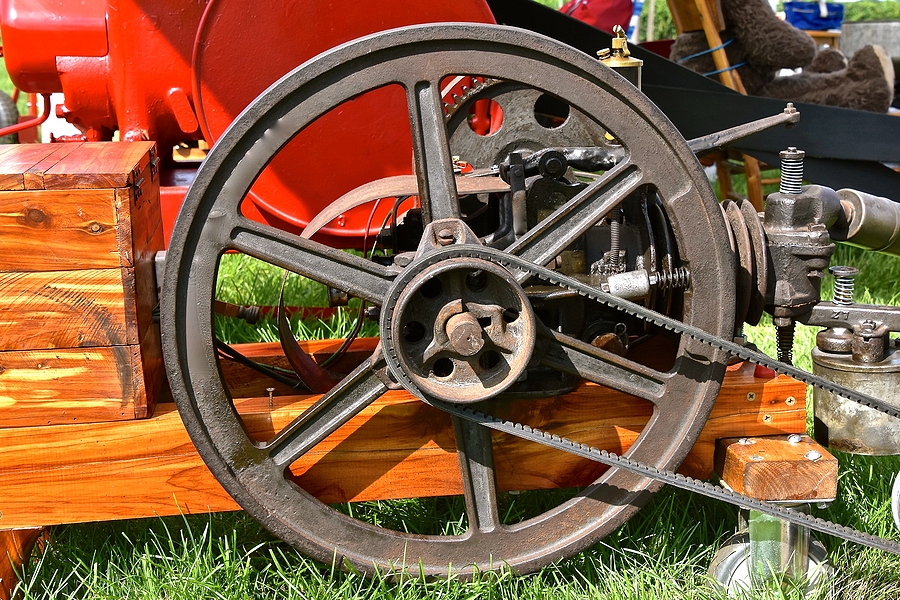 A v-belt being used.

Serpentine belts have ribs running parallel to the length of the belt. They are very flexible, allowing them to rotate around small pulleys. The surface areal of the ribs provides much more friction than a flat belt, but they can still allow slippage if necessary.

Timing belts are more like gears in the sense that they cannot allow the two pulleys to become disengaged from each other - no slipping is allowed if properly tightened. This is a great choice if two systems must rother with a very precise relative speed, but they are too far apart to allow a complex gear train between them.

Finally, chain drives are worth mentioning along with timing belts. They can provide the same precise matching of speed, but are well-suited for low-speed applications.

Motion transmission is a complex subject. It’s very mechanical and easy to visualize, but the great diversity of component configurations can present their own benefits and challenges which are helpful for engineers and technicians to understand.