Learn about how Hall-effect sensors are used in linear and electric motor applications, including brushed and brushless DC motors.

Hall-effect sensors are common in the robotics and automation industries. They have many different uses, from proximity sensing to safety switches.

Their use in brushless DC motors and linear applications is essential to many different industrial systems. Hall-effect sensors can also be used in conveyor systems, linear measurement systems, and rotary encoding applications.

How Do Hall-effect Sensors Work?

This change can be measured as a voltage differential on the plate, and the sensing unit can tell how close a magnet is to the sensor or simply switch states. The Hall-effect can be very useful in motor applications because the sensor can connect to a controlling unit capable of varying current based on a DC motor’s needs.

Brushed electric motors are less electronically complex than brushless motors, working on mechanical connections inside the motor to function. This leads to part wear and can reduce the longevity of the motor in comparison to brushless motors.

The fundamental driving force behind any electrical motor is a magnetic force—a magnetic field is created, and the opposing forces of north and south cause the shaft to rotate. One field exists in the armature (the rotating shaft) and another opposing field in the stator (the stationary housing around the Armature). 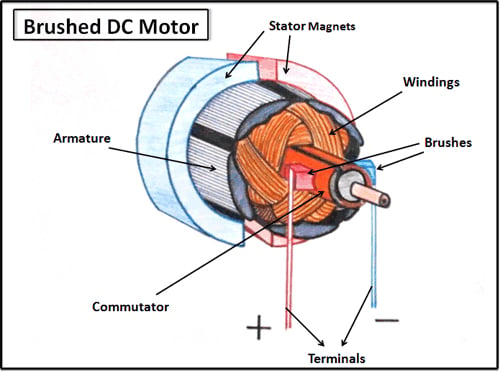 Once the shaft starts to rotate, it continues until blanched in magnetic equilibrium. If the state of the magnetic field does not change on the armature, then the shaft will stay in this equilibrium. To keep the shaft rotating, the magnetic states must switch when they are close to equilibrium. This forces the shaft to continue its rotation, which continues several times per rotation depending on the motor’s physical makeup.

A commutator is used to change the states of the magnetic field in the armature. In a brushed motor, it does this by physically contacting the brushes during their rotation.

As the shaft rotates, it switches states based on whether the brush is in contact with the armature or one of the shaft’s non-conducting spaces. The switching of states creates a constant torque on the motor, keeping the shaft in constant rotation.

Instead, a Hall-effect sensor is used to determine the location and state of the armature. The sensor can sense when there is a north polarity and a south polarity. 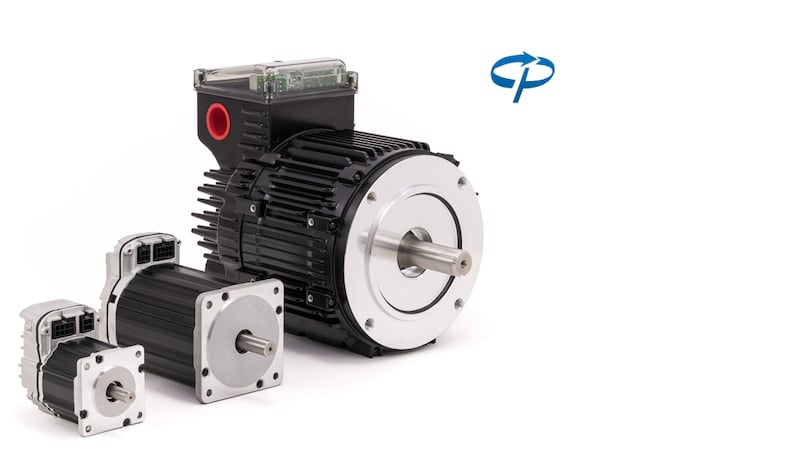 This has several benefits over brushed motors. Without the physical contact of a commutator's brushes, friction is reduced, and wear parts can be eliminated from the system.

DC motors also have the added benefit of torque and speed adjustments based on conditions. If an application needs more torque and less speed, the motor can be adjusted to deliver the torque or be changed to offer more speed and less torque. With an adjustable range of speed and torque settings, Hall-effect sensors allow brushless DC motors to fit in a wider variety of industrial and robotic applications.

Hall-effect sensors are useful in various applications that extend beyond their use in DC brushless motors. With more modern sensors in use today, the temperature has less effect on their accuracy, making them more useful than in the past.

How does a linear Hall-effect sensor work? They can be useful in linear sensing applications for many different industrial needs. Since they work on the principle of magnetic field detection and can detect magnetic fields’ varying strengths, they can be quite versatile. They can work as proximity sensors for part detection and clamp confirmation, or to give location information on the moving parts within the machine.

Conveyor systems may use Hall-effect sensors to determine the location of the product on the conveyor line. They can also be used for fluid detection in industrial tanks.

A float with a magnet attached to it slides up and down in the tank based on the tank’s fluid level. As the height changes, sensors located up and down the rod detect the magnet and relay the tank level back to a controlling unit. Since they are non-contact sensors, this application is a good fit for a Hall-effect sensor.

Other sensors may not work in this application due to interference from the substance in the tank.

Since Hall-effect sensors can determine the magnitude of a magnetic field, they can tell the proximity of magnets within their range. As the proximity changes, the voltage across the sensor changes and can then be relayed to a controller. This can be used for part detection to let the controller know how close a part is to the desired location. It can also be used to relay information about tooling to the controller. Other applications include moving shaft location detection, push-pull, and push-push detection.

DC motors can change torque and speed settings all due to Hall-effect sensors. Conveyor systems sometimes use them for product location and to determine motor speeds. They are useful for part detection and determining clamp conformation on tooling. Since they can detect a range of magnetic field strength, they can give proximity information to controllers for the manufacturing process.

Hall-effect sensors are versatile sensors that can be used in many electric and linear applications. They help to make DC motors more efficient and reduce wear parts generally associated with brushed electric motors.