Robots and CNC Machines - An Assembly Configuration Made in Heaven

Robots and CNC Machines - An Assembly Configuration Made in Heaven

Our own Control Automation engineering staff had the opportunity to visit VersaBuilt, a CNC robotic integration shop offering an application system from the Universal Robots UR+ series.

One of the biggest problems faced by manufacturers isn’t really the ability to use a piece of equipment. These days, with online tutorials, videos, and digital access to manuals, it’s not that hard to learn how to push buttons and make something work.

A company local to Boise, Idaho - VersaBuilt Robotics - is facing those big challenges in the world of machine tooling and part handling with a series of robotic work cells. The most recent of which include a UR10e, made by Universal Robots.

When I get the chance to stop by after work for a tour and demonstration, you bet I’m going to say yes.

So I headed out a couple of hours early from work and met with Brian Havey, electrical engineer and Director of Sales to show me the past revisions, the present offerings, and the future dev work of VersaBuilt. 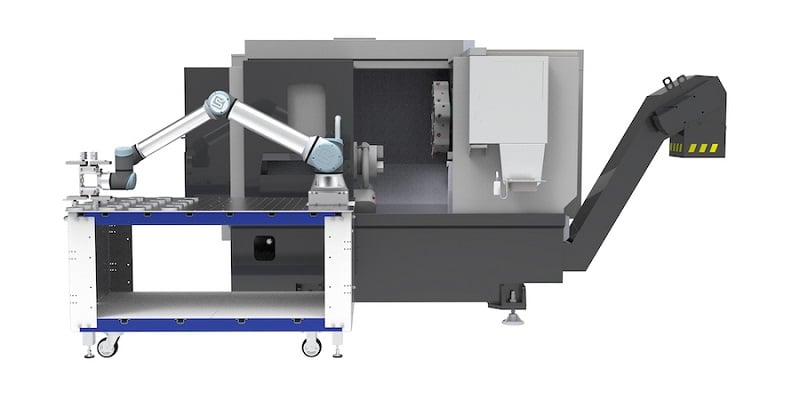 The Challenge with Automation

The real challenge with manufacturing comes from making all of your equipment work together. Electrical and automation controls have been around for decades, and the technology has advanced at nearly overwhelming rates. It’s almost a guarantee that any new machine will need some sort of custom interface board or network protocol to communicate and work in harmony with the rest of the process or overall system.

Two types of machines have a tendency to be a bit more difficult for novice users to integrate into a larger system scope - robots and CNC machines. 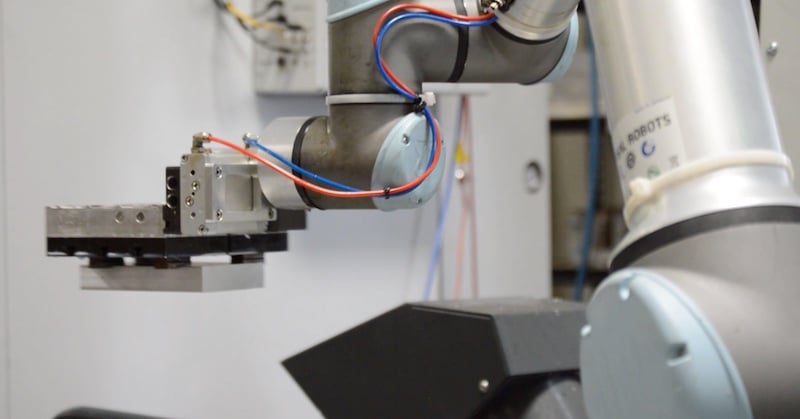 Robots from various brands enjoy the luxury of some excellent programming interfaces, usually done through a teach pendant, or sometimes by hand guidance for newer collaborative models. This programming process is great for a standalone system, like a pick-and-place or stacking system, but often a bit more difficult to understand the connection of one robot to the larger system.

CNC machine controls are another particularly challenging device to access from external equipment. In some cases, it even requires an in-depth knowledge of the control board in order to locate terminals or connections to provide even the most basic start/stop commands or status data acquisition.

VersaBuilt started at the intersection of both of these challenges. Working with Rekluse Motor Sports, a maker of aftermarket motorcycle clutches and components, automation seemed possible, yet challenging. A single robot was unable to grip the multiple part configurations without a wide array of jaws, toolholders, orientation parameters, and other part considerations that presented obstacles with every new part iteration.

VersaBuilt’s solution considered a different angle. What if, instead of using the robot to pick and place the part itself, the robot instead picked and placed the entire workpiece holder? 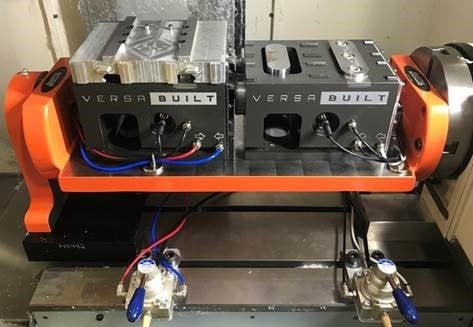 Quickly, a more standardized placement method was designed. Now, the robot only needed one program configuration for an endless variety of parts. Only the workpiece holder inside the jaws needed to be customized for each part. This system came to be known as the MultiGrip jaw, a recognizable feature of VersaBuilt installations.

But the robotic tool handling alone is only one piece of the solution. The other part of VersaBuilt’s system is the physical and electrical interface with the CNC machine for stable, reliable, and remote configuration.

The connection with the outside world is really what sets any system apart from competing applications. Many robotic CNC tending systems are created by all sorts of manufacturers, each with unique characteristics.

The UR 10e cobot is linked to the VersaBuilt system controller, which also connects to the CNC machine controller. Most of the machines in the automotive shop were Haas, but virtually any other make and model is adaptable.

One of the most exciting features in my opinion (since I do love process controls) is the ability to wirelessly connect to a nearby tablet to facilitate data collection and monitoring, emergency and fault information, and control inputs for both the robot and the CNC machine.

Physically, the interface involves the robot mounted on a pedestal, fixed to a table outside the machine. The table is carefully positioned with respect to the machine in order to minimize errors and inaccuracy. The parts are transferred from robot to machine deck by handing off the entire MultiGrip jaw into the purpose-built matching pneumatic vise, precisely attached to the CNC machine. 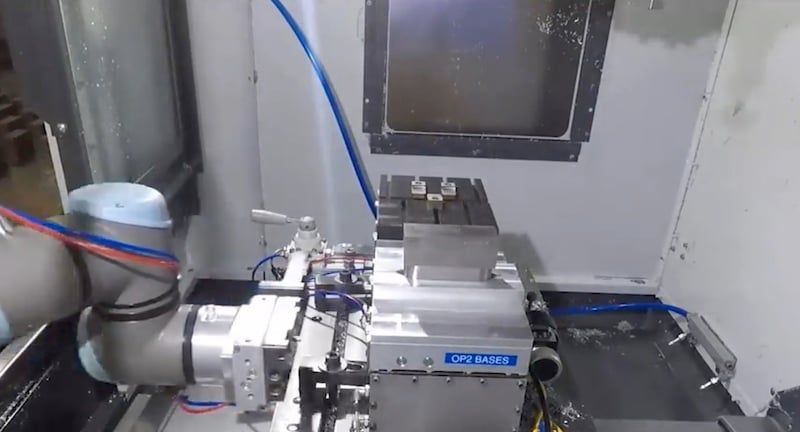 Figure 4. Using a view from a camera inside the CNC machine, the robot is just releasing the tool holder onto the vise. Image used courtesy of VersaBuilt

All of these MultiGrip jaws, regardless of the industry, the number of configurations, or the material properties, can all be designed with a standardized interface to the robot gripper. This standardization means fewer custom details are required for each customer case. As we in industry already know, fewer custom parameters means less chance for odd, unpredictable errors that require a highly trained field service technician to address your specific application. In many cases, the end customer can complete all required calibrations and minor modifications in-house.

This entire solution including the robot, the electrical interface, and the software, all encompass the concept of the UR+ application kit system, an increasingly common strategy for equipment providers looking to design easy plug-and-play automation solutions.

Any time I get to visit an automation company, I get excited once again about the new innovations happening, even using fairly industry-standard equipment. Robots may not be new, milling machines certainly are not a new invention, but companies like VersaBuilt that enable massive production increases with a few hardware innovations and a short planned installation time - that is exciting.

The time spent with Brian at the VersaBuilt facility, along with his knowledge and expertise of the systems from past to present showed me that plenty of people are ready to jump up and assist anyone looking to automate a machine tool system.