How to Train a Robot: Selecting a Robotic Arm

How to Train a Robot: Selecting a Robotic Arm

This article will outline some key factors to consider when selecting a robotic arm.

As manufacturing becomes more automated, there seems to be an endless list of languages, updates, and systems to learn. One device that has proven to add value, flexibility, and aid in automation adoption is robotic arms.

Even robotic arms can require time and knowledge to install, program, and change operations. For more information on selecting and training for robotic arms, check out the next article in our How to Train a Robot series: Machine Tending.

There are many online tools to walk you through how to select the right solution for each application. First, it is essential to define some short and long-term goals. For example, if you are looking for a machine tending solution, consider the types of tasks a robotic arm might do to add value.

Perhaps selecting a robot arm with a longer reach or payload capacity could accomplish an extra step in processing and increase ROI.

Does your company have demand fluctuation?

Having a solution that is easy to relocate and reprogram increases flexibility and value by having a robotic arm tend different machines based on where extra help is needed. This is not only good for production fluctuations, but it future-proofs a machine tending robot by having a plan for changing locations, programs, end-effectors, or even applications.

Moving a robot around might be inefficient but might serve as a good case study or proof-of-concept to find other areas where robotic arm solutions will prove useful. Ready Robotics and other companies offer ROI Calculators to help answer questions that may also help drive robotic arm adoption.

What are your operation demands?

If you used a robotic arm in an application such as machine tending, having an answer to the following questions on hand will provide a foundation of data to start looking for a robot arm:

This article mentioned robotic arms and machine tending, but there are many types of arms and applications. Some of the most common are: 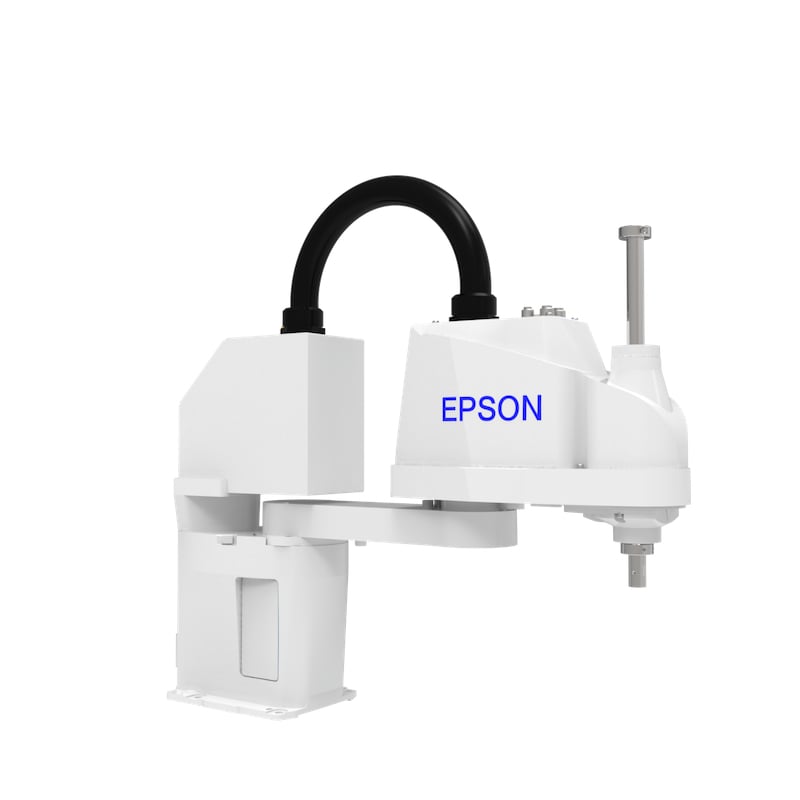 An example of a Scara robot from Epson. Image courtesy of Epson.

Vention has an extensive resource outlining the pros and cons of these types of arms, but for this article, articulated arms will be the focus. Articulated arms are flexible and offer a wide selection of end-effectors that could be used in many applications.

Some robotic arm companies and suppliers are pushing to make robotic arms more user-friendly for anyone to install, program, or operate with little to no experience. While many solutions are quick and easy to integrate and use, it is important to consider the following factors to gain the greatest ROI and competitive advantage.

After considering where and how a robotic arm solution would add value to the operation, you might have already found if an industrial robot, which requires safety guards, or a collaborative robot would provide more value.

If not, consider the following.

Example: A cobot used to move sheet metal was restricted from lifting the material higher than about knee or thigh height to prevent contact with critical areas of a worker’s body, such as arteries. Additionally, in this application, a lower speed was used to reduce the ability of the thin sheets from being able to puncture or slice through the worker’s jeans.

Other than type and deciding on collaborative or industrial robot arm considerations, there are more considerations to make, including the following:

The first three might be easy to select. How far does a robot arm need to move, how much weight, and how many axes are necessary to operate in and around different equipment? However, the last three might require extra thought.

Speed means more than operation. The speed must also consider the capability of the end-effector selected. For example, if a robot arm moves a four-pound part too fast or stops quickly, it might dislodge from the end-effector.

In one application, engineers discovered a robot arm using an end-effector with a suction cup under vacuum would drop the large glass sheet it was moving if the arm accelerated or decelerated too quickly.

If the arm tilted the end-effector more than a few degrees, the suction cup would also lose its hold on the glass. Problems like this example might slow cycle time and reduce production and ROI. Understanding each application, speeds, braking, and inertia will help prevent failures like this example from happening.

As mentioned earlier, if there is value in moving a robot, its mass will be a factor. Mounting a robot arm on a workbench, mobile work cell platform, or even a self-driving robot will need to consider the mass of the entire system and materials being moved.

Remember the reach of the robot arm and take a minute to consider the center of gravity and mass during operation to prevent misalignments, drift, or tipping.

These factors might seem simple, but if not considered when selecting the robotic arm it may not deliver expected results. Selecting a robotic arm might still work for your application. However, in an advanced automated manufacturing environment, competitive advantage or gaining a better ROI could be the difference between producing a few extra parts per day, hitting goals, and overall success.

For more information on selecting and training robotic arms check out the next article in our How to Train a Robot series: Machine Tending.