RTDs vs. Thermocouples in Control Systems

RTDs vs. Thermocouples in Control Systems

Control systems can utilize temperature sensors such as RTDs or thermocouples. Which device is best for your application?

Many industrial, commercial, and residential facilities and products require accurate temperature measurements. While some applications still use a simple bi-metallic thermostat for temperature control, electrical methods of measuring temperature are becoming more common.

The two most common electrical methods for measuring temperature are the resistance temperature detector (or device, depending on who you ask), called an RTD, and the thermocouple. They take advantage of different electrical phenomena, meaning they each have different use cases.

In most materials, the electrical resistance increases as the temperature increases. This makes sense when considering Brownian motion; the higher the temperature, the faster the atoms vibrate, the harder it is to pass an electron through this lattice of vibrating atoms. 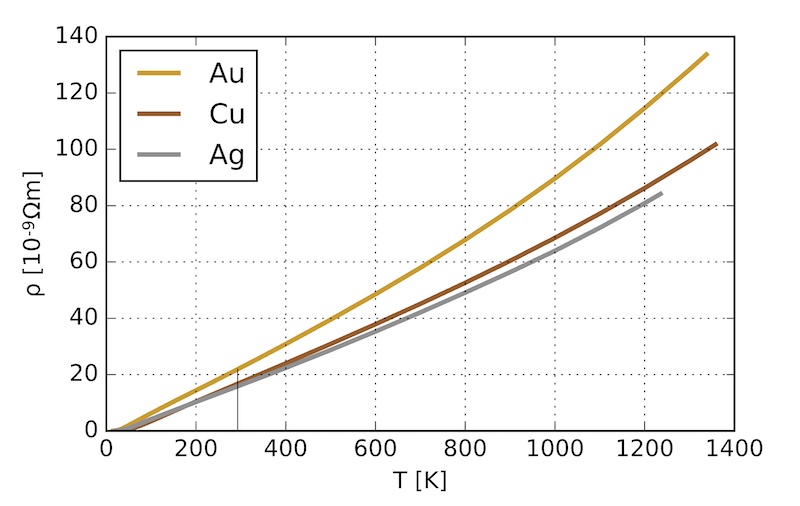 Figure 1. The resistance of gold, copper, and silver as a function of temperature. These metals are mostly linear, with only a slight curvature over this temperature range. Image used courtesy of Geek3

RTDs can detect small temperature changes that occur relatively slowly. This makes them suitable for keeping a continuous process within control limits. For example, an RTD can monitor the temperature of a continuously stirred tank reactor (CSTR), where reactants are fed at a steady rate, the reaction occurs, and the products are removed constantly.

The temperature will likely not change very fast, but may need to be measured within tight tolerances. The RTD may be used in a control loop that opens a valve for cooling water or a heating jacket.

Other Considerations for RTD Usage

RTDs are often constructed using thin wires or platinum, driving up cost. Because the precious metals market is volatile, an RTD purchased today may vary wildly in price compared to one purchased a year ago.

This is a consideration for environments that receive heavy mechanical shock or are otherwise harsh, as replacing an RTD can be expensive. In these types of environments, a thermocouple may be more appropriate.

Measuring small resistance changes is difficult and is not typically performed directly. Instead, a Wheatstone bridge circuit is used to measure a small voltage change, which corresponds to a small resistance change, which corresponds to the temperature change. The addition of this Wheatstone bridge circuit requires some additional hardware that must be included in the measurement system. 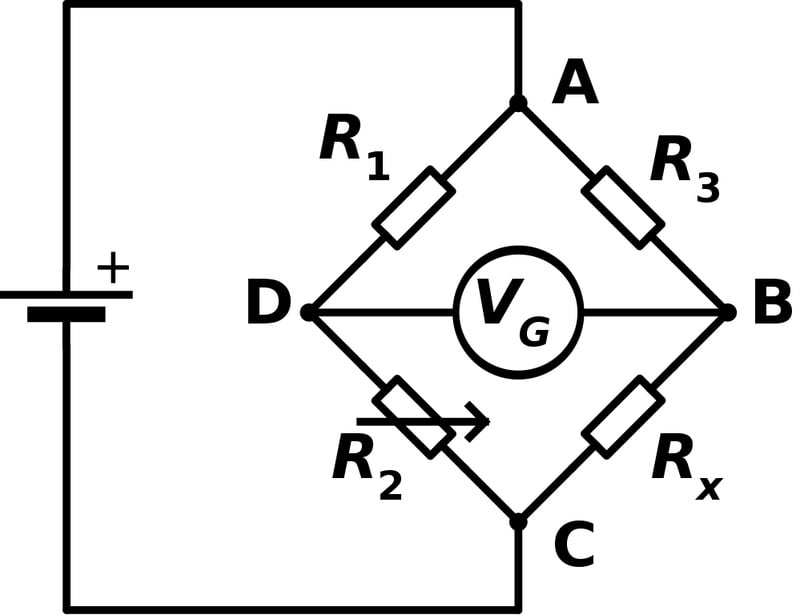 Figure 2. Wheatstone bridge schematic. The values of R1, R2, and R3 are known, and Rx is the RTD. As the resistance of Rx changes, the voltage measured at VG changes, and VG is used to calculate the temperature. Image used courtesy of Rhdv

Thermocouples operate on the Seebeck effect, which states that if two dissimilar metals are in direct contact at one end, a voltage will be generated at the other end, which will scale linearly with temperature. Thermocouples have two different metals welded at one end, and a plug at the other for connecting to a meter that translates the voltage into a temperature value. 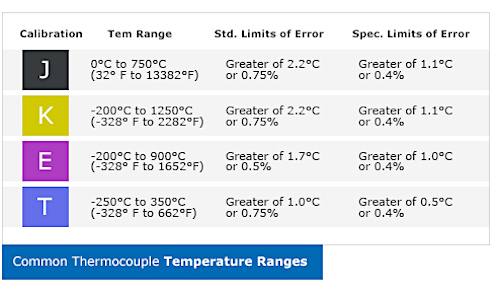 Figure 3. A snippet from a thermocouple chart, with type J, K, E, and T thermocouples. Image used courtesy of OMEGA

Depending on the types of metals used, the thermocouple will have different properties and applications. The types are specified by letter, which lists the wire colors, temperature ranges, environments, and other information about where each thermocouple can be used. Thermocouple manufacturers provide a chart of the different types.

Thermocouples are a quick way to measure temperature. Standalone thermocouple meters are typically inexpensive, meaning experiments can be conducted quickly with thermocouples. Thermocouples with standard connectors can be embedded in a piece of equipment, and a technician with one meter can rapidly check temperatures in multiple places. 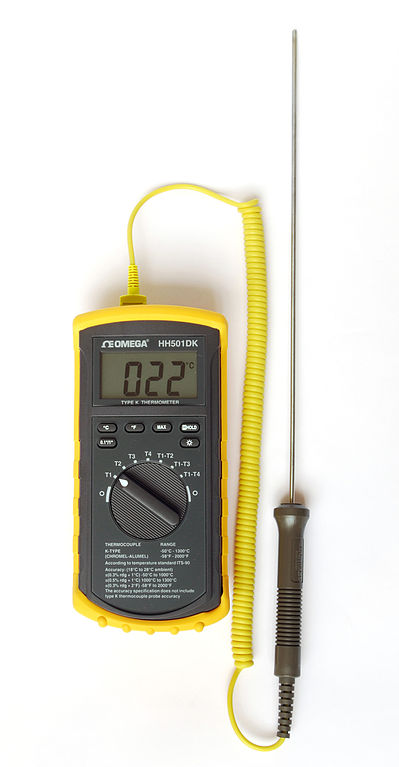 The most versatile thermocouples (J and K type) are usually inexpensive, yet can be used across a large temperature range in numerous environments. For many industrial processes, J or K thermocouples can provide most of the data cost-effectively. Suppose a large heat-treating oven was not heating evenly. An array of thermocouples could be installed quickly and cheaply to determine where there might be hot and cold spots.

Any two metals in direct contact can produce a voltage that varies with temperature. While it is tempting to just use a multimeter or voltmeter to measure temperature with a thermocouple, consider that the two thermocouple metals are in direct contact with the copper contacts of the meter. Each of these contributes to the total voltage, leading to inaccurate results. Thermocouple readers take account of this effect with additional thermocouples, sometimes called “cold junction compensation.”

Thermocouples can be more susceptible to electrical noise. They act as a small antenna, collecting signals and changing the voltage across the terminals. In high electromagnetic interference (EMI) environments, a thermocouple may be a poor choice of temperature sensor for this reason.