Many PLC commands are well-known to programmers, including contacts, coils, timers, and counters. But a less-common instruction is the one-shot, capable of harnessing the incredible processing speeds in a CPU.

Register for Control Automation Day 2022 (June 21st) and learn from industry experts at Rockwell Automation to gain crucial insight about when to consider upgrading an automation system, and how to avoid the costly risks associated with delaying critical control investments.

In a previous article, I wrote about how to use timers in ladder logic. A typical next step is to discuss counters, being of a very similar function type and construction. However, before approaching the subject of counters, it is useful to investigate and understand the use of One-Shot instructions.

One-Shots are a very important part of a PLC program because of the incredible speeds that processors achieve in scanning their programs. Let’s talk about these processors for a moment. I just ran a test on my L16ER CompactLogix controller and the program scanned in eight microseconds. Our brains cannot fully comprehend this speed. We are not designed for it. To give us a better frame of reference, let’s measure the speed of something we can understand. When I cycle a bit on and off by hand in the logic and add 1 increment at every scan, I get 4486 counts even if I try to be as fast as possible. 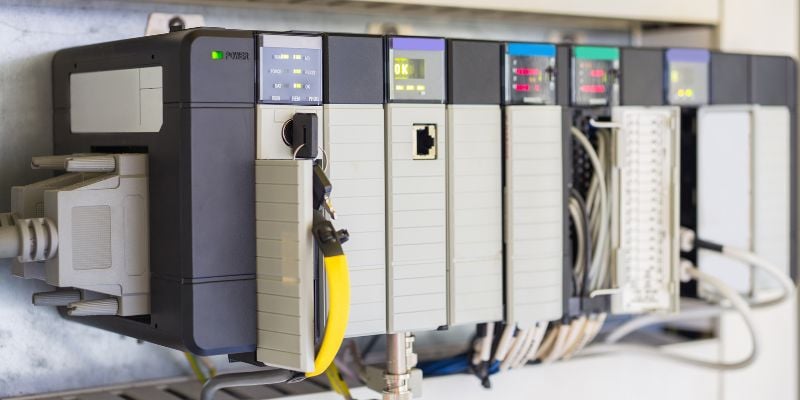 Figure 1. PLCs are the core of control systems, and understanding the logic is very important. Image used courtesy of Canva

If we were trying to count how many times a photo-eye flagged for a passing unit using an incrementing math instruction, we’d have hundreds of thousands of counts even if it only flags for a second. What we need is an instruction that is able to activate only for a single scan of the controller when a condition goes true, and we have such an instruction available as the One-Shot

One-Shots come in a variety of forms, but with only a couple of different functions. The two different functions are triggered by a rising or falling edge. Alternatively, this can be known as a positive-going or a negative-going edge. Rockwell Automation’s Studio 5000 has a third option simply called a One-Shot and serves as a rising edge instruction in a very small package that fits in line with existing logic. This instruction is abbreviated ONS. In addition to the ONS, Studio 5000 also has traditional One-Shot Rising (OSR) and One-Shot Falling (OSF).

A falling edge One-Shot would activate that latch when the In bit goes true but then activate the Out bit at the same time as it unlatches the Latch bit. Very similar logic, but slightly different use.

In the logic below, I set up an ONS instruction to add a constant to a unit width. If the ONS was not in place, the value of 12 would be added to CurrentWidth many thousand times each time Sensors 1 and 2 were active.

Remember that the ONS function only acts on the rising edge of the inputs.

In many years of programming, there are countless examples of ONS instructions. The OSR instruction experiences far less use due to its format as an output instruction instead of an input bit. Let’s examine a situation where this instruction would allow us to do something critically different than the ONS. 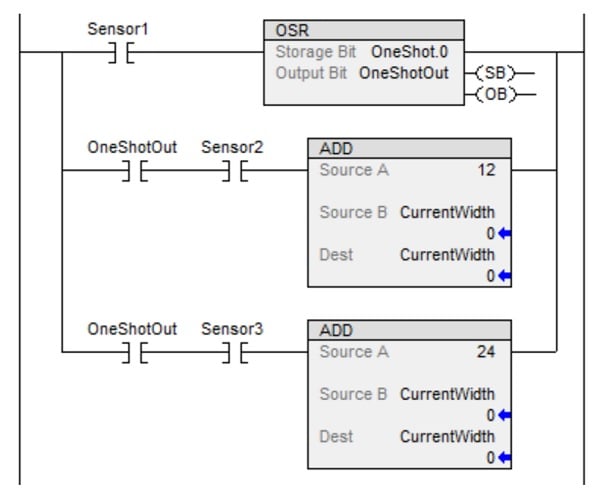 When Sensor1 activates, we need to add either 12 or 24 to the CurrentWidth. Before we add we need to look at the state of Sensors 2 and 3 to decide which number to add. In this case, the OneShotOut will trigger the correct one. If we wanted to use this OneShotOut in other places in the program, we could call it up from anywhere. A rare but useful tool to keep in your toolkit!

The One-Shot Falling is a critically different instruction than the previous two. Here is where this can be used. I need to count how many sensors are triggered during a specific window of time. Knowing how many sensors are triggered will allow me to make my decision. If I use a rising edge to trigger my decision, I may not have time to ensure all the sensors have properly triggered. 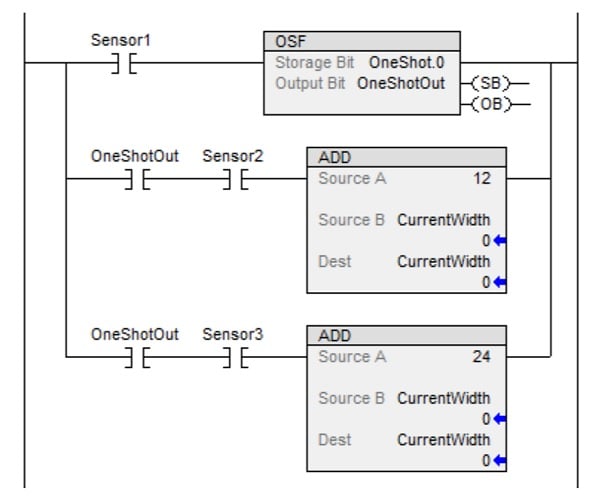 I can accomplish my goal by triggering an OSF instruction with the first sensor, immediately increasing the CurrentWidth value depending on how many sensors are active as the item leaves the first sensor. Just like the OSR instruction above, your OneShotOut would be usable anywhere in the program that can access the tag.

Be aware that in older versions of Rockwell software, like RSLogix5 and RSLogix500, you may find versions that do not have the ONS instruction and you are forced to use either the OSR or OSF.

Other companies, such as Automation Direct, offer a similar function but very different appearance for the one-shot system. In the figure below, I’ve displayed Productivity’s four different One-Shot instructions as an illustration of how it might appear.

With the instruction in place, you simply assign the tag (for example, input terminal) meant to trigger the One-Shot application. Examining these different systems is very useful in understanding the wide variety of contexts in which this same function might appear.