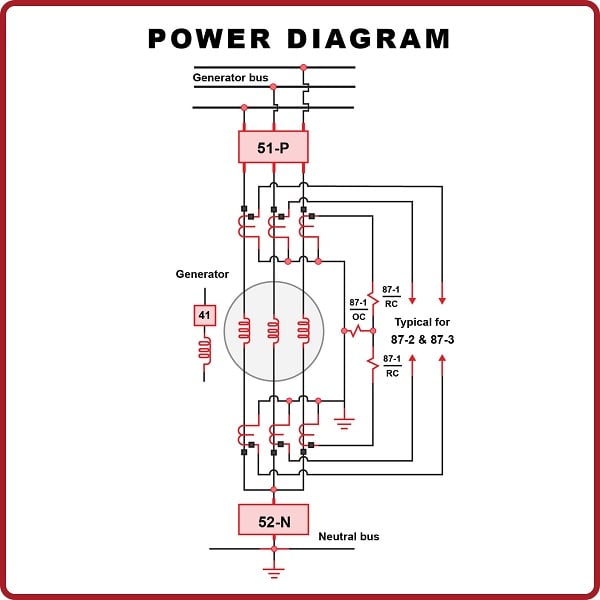 Auxiliary and lockout relays provide additional branch control signals from a single point of origin, like a circuit breaker, though lockout relays must be reset manually.

An important type of “accessory” relay, especially for legacy electromechanical protective relays, is the so-called auxiliary or lockout relay, designated by the ANSI/IEEE number code 86. The purpose of an 86 relay is to serve as an intermediary element between one or more protective relays and one or more control devices, both expanding the number of control elements actuated by any one protective function and also providing a “latching” function which must be intentionally reset in order to resume normal operation of the system.

Lockout relays are typically panel-mounted devices equipped with handles for manual resetting. This photograph shows a lockout relay actuated by a breaker fault (BF) function, requiring manual intervention before the system may be returned to service: 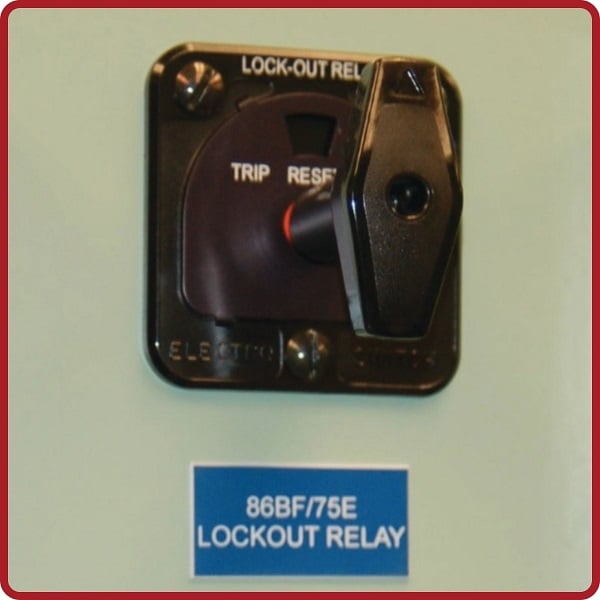 The following photographs show what a lockout relay looks like when tripped (top) and reset (bottom). The relay’s trip coil may be seen in both photographs as a diagonally oriented metal component at the bottom: 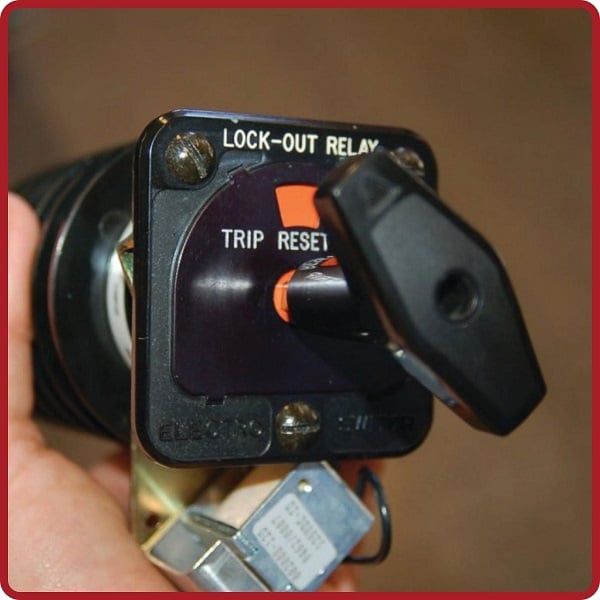 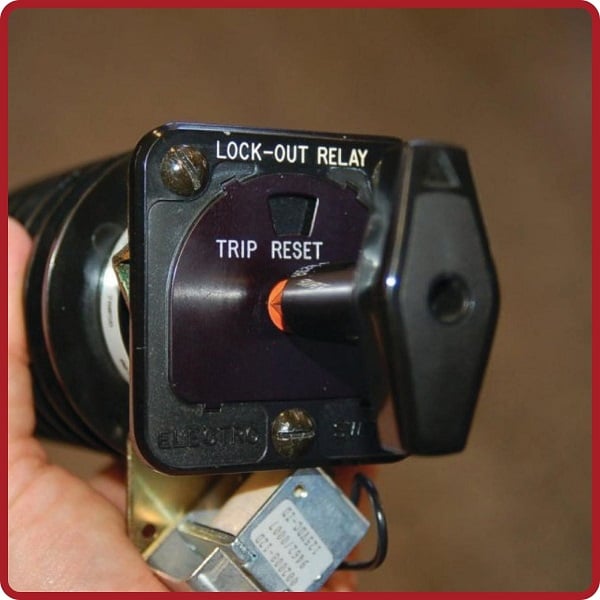 Multiple sets of switch contacts operated by the common shaft inside the lockout relay may then be used for a variety of functions, including sending trip signals to circuit breakers, activating sirens, energizing indicator lamps, sending status signals to other protective relays, inhibiting (blocking) other relay functions, etc.

When interpreting switch states in a latching relay such as this, the “reset” state is considered the “normal” state (i.e. the state where the relay is “at rest”). The actuating stimulus for an 86 relay is energization of its trip coil, and so the “tripped” state of a lockout relay is its “actuated” state where all of its contacts transition to their non-resting states (e.g. NO contacts closing and NC contacts opening).

A typical application for an 86 lockout relay is in this generator protection system, where a set of three differential current relays (87) sense any imbalance in currents entering and exiting the generator’s stator windings. This is a case where the detection of current imbalance needs to trip multiple circuit breakers and signal a steam turbine control system in order to protect the generator from possible damage: 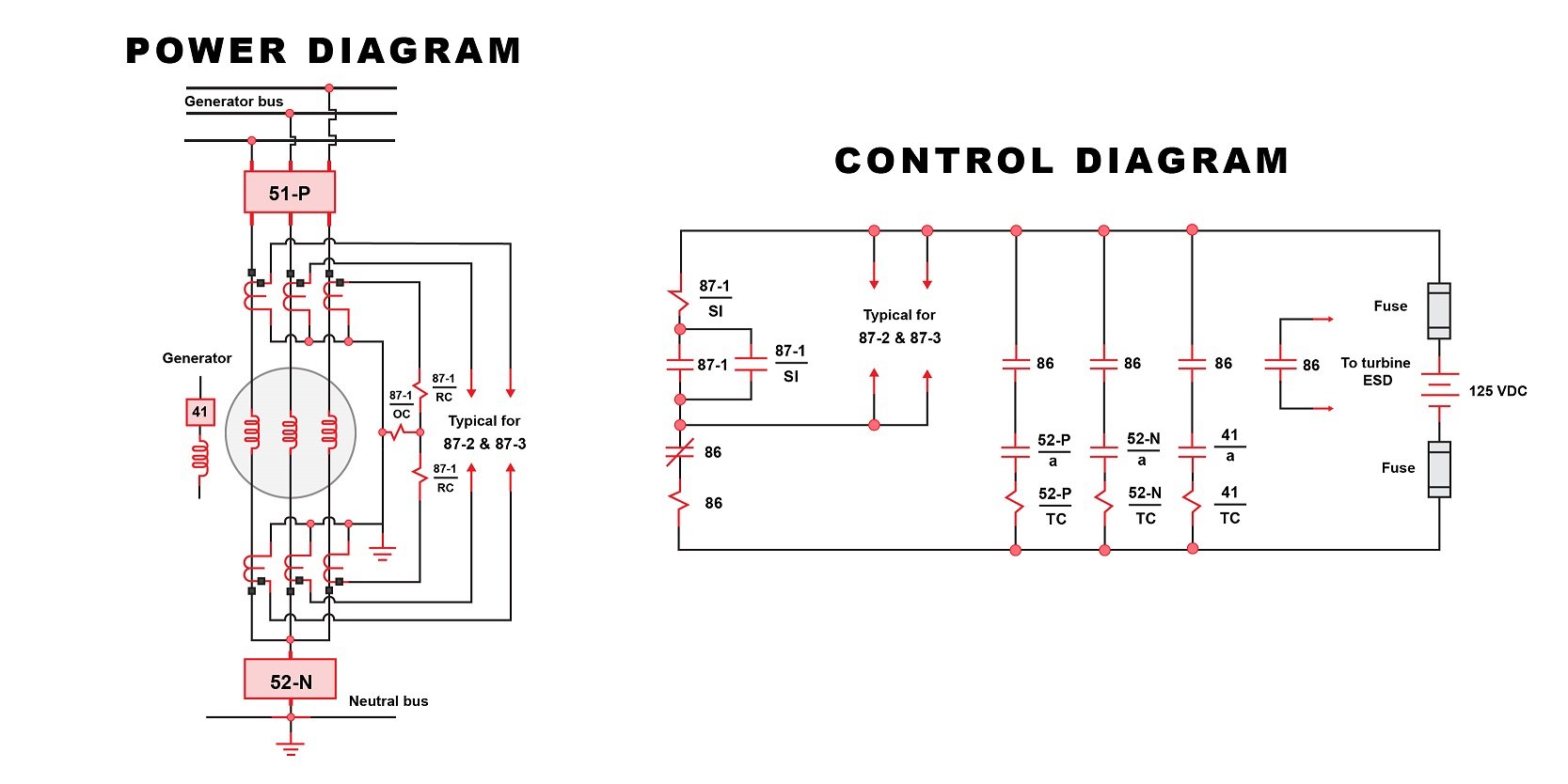 If any of the differential (87) relays pick up, the lockout (86) relay’s trip coil will become energized through one or more of the 87 contacts. This in turn causes the lockout relay to switch to its tripped state by spring tension, opening the NC contact to cut power to the 86 trip coil (and unlatch the 87 relay seal-in circuits) and closing all four NO 86 contacts. Three of these closed contacts then send DC station power to the trip coils of three different circuit breakers: the main phase breaker trip coil (52-P/TC), the neutral breaker trip coil (52-N/TC), and the trip coil of the breaker controlling DC power to the generator’s field winding (41/TC). Another NO 86 contact sends a discrete shutdown signal to the steam turbine’s emergency shutdown system (ESD) to halt the flow of steam to the turbine and thereby prevent over-speeding.

The latching nature of the 86 relay means none of these circuit breakers may be closed until someone turns the handle of the 86 relay back to the “reset” position. This latching action “locks out” the generator and prevents any remote attempt to place it back on-line until someone physically walks over to the control panel and has an opportunity to investigate the reason for the trip. This feature is particularly useful when a multitude of inputs are wired to trip the 86 relay. In the case of a power generator, such inputs may include (but are not limited to) a loss-of-field-excitation relay (40), a thermal overload relay (49), and/or a directional power relay (32), the trip contacts of all these relays paralleled with the differential current relay (87) contacts shown in the example diagram such that closure of any one energizes the lockout relay’s trip coil and takes the generator off-line. The requirement of manually resetting the 86 relay prompts the human operator to survey which of these relays was responsible for initiating the lockout trip.