The term “grid” refers to the conductors and equipment interconnecting power sources to power loads in a wide-spread electrical system. Generating stations (i.e. “power plants”) convert various forms of energy such as fossil fuel, solar, wind, elevated water, and nuclear into electrical power; which is then sent through step-up transformers to raise the voltage and reduce current; conveyed long distances over “transmission lines” at voltages ranging in the hundreds of kilovolts; received by “substations” which serve as interconnecting hubs for generating stations and loads, using step-down transformers to reduce transmission line voltage and increase current for distribution to local loads; conveyed to industrial, commercial, and residential points of use over “distribution lines” at tens of kilovolts (or less); and then finally stepped down in voltage once more at points of use by transformers located at power customer sites. A myriad of circuit breakers, disconnect switches, fuses, and other devices serve to disconnect and re-route power as needed within the grid. Sensing instruments monitor the flow of power throughout the grid, for regulatory (control), billing (metering), and protection (shutdown) purposes.

The innovation of alternating current (AC) is what made large-scale electrical power grids possible. DC power – at least when implemented with 19th-century technology – is prohibitively expensive to transport over long distances due to the inability to easily transform voltage and current levels. AC, by contrast, allows the use of electromagnetic transformers, allowing voltage to be stepped up and current stepped down for economical transmission (i.e. small-gauge conductors suspended by long insulators) and then allowing voltage to be stepped down (for safety) with a proportional increase in current for driving heavy loads at points of use.

The following illustration shows a simplified schematic diagram of a polyphase AC power system dating from the year 1895, showcasing an example of a Westinghouse power transmission and distribution system designed to generate power at Niagara Falls and send it some 60 miles distant: 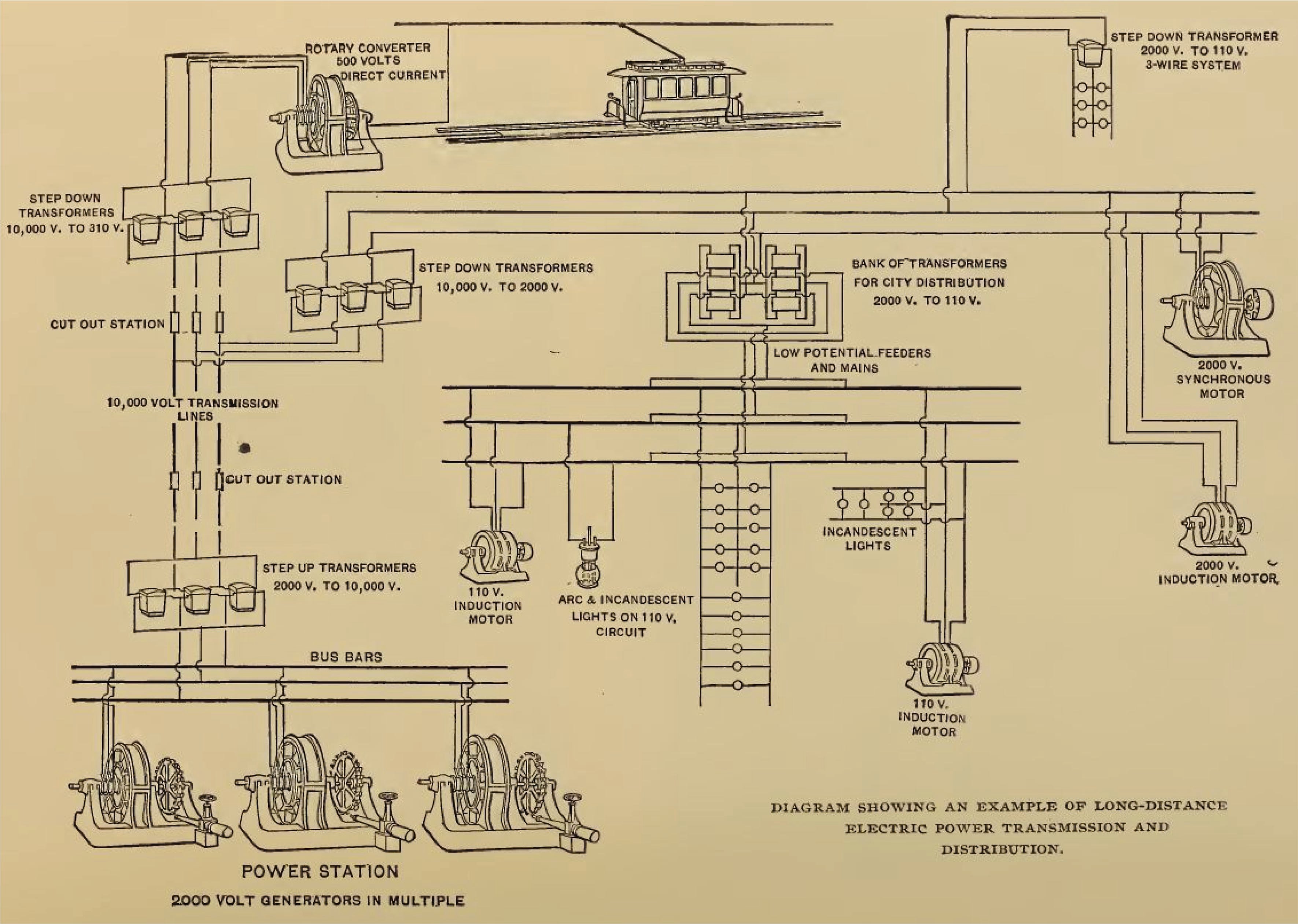 This system was typical of its era, with one centralized generating station providing electrical power to all portions of the city. Electricity at the generators was stepped up in voltage to 10 kV to facilitate long-distance transmission over economically thin wires, then stepped back down through a series of transformers to voltages appropriate for direct use. Certain applications such as traction motors for electric streetcars required DC power rather than AC power (as efficient speed control for AC motors did not exist at that time), and given the lack of modern solid-state rectifier (diode) circuits the only practical solution was to employ motor-generator machines called rotary converters to convert AC into DC.

Modern electric power grids link dozens of large electric generating stations together with hundreds of cities to provide electricity across much larger geographic spans than the Westinghouse system of 1895. Modern power electronics have all but replaced rotary converters and made conversion between AC and DC relatively easy and efficient, allowing DC to now play a role in high-voltage power transmission. Some electrical power plants located in remote regions output DC along two-conductor transmission lines, which is later converted to AC and synchronized with AC generating stations on the grid.

The following photograph shows a computer monitor plotting a trend over time of power sourced to and drawn from one electric utility company’s service region, in this particular case it is the one operated by Puget Sound Energy in northwest Washington state: 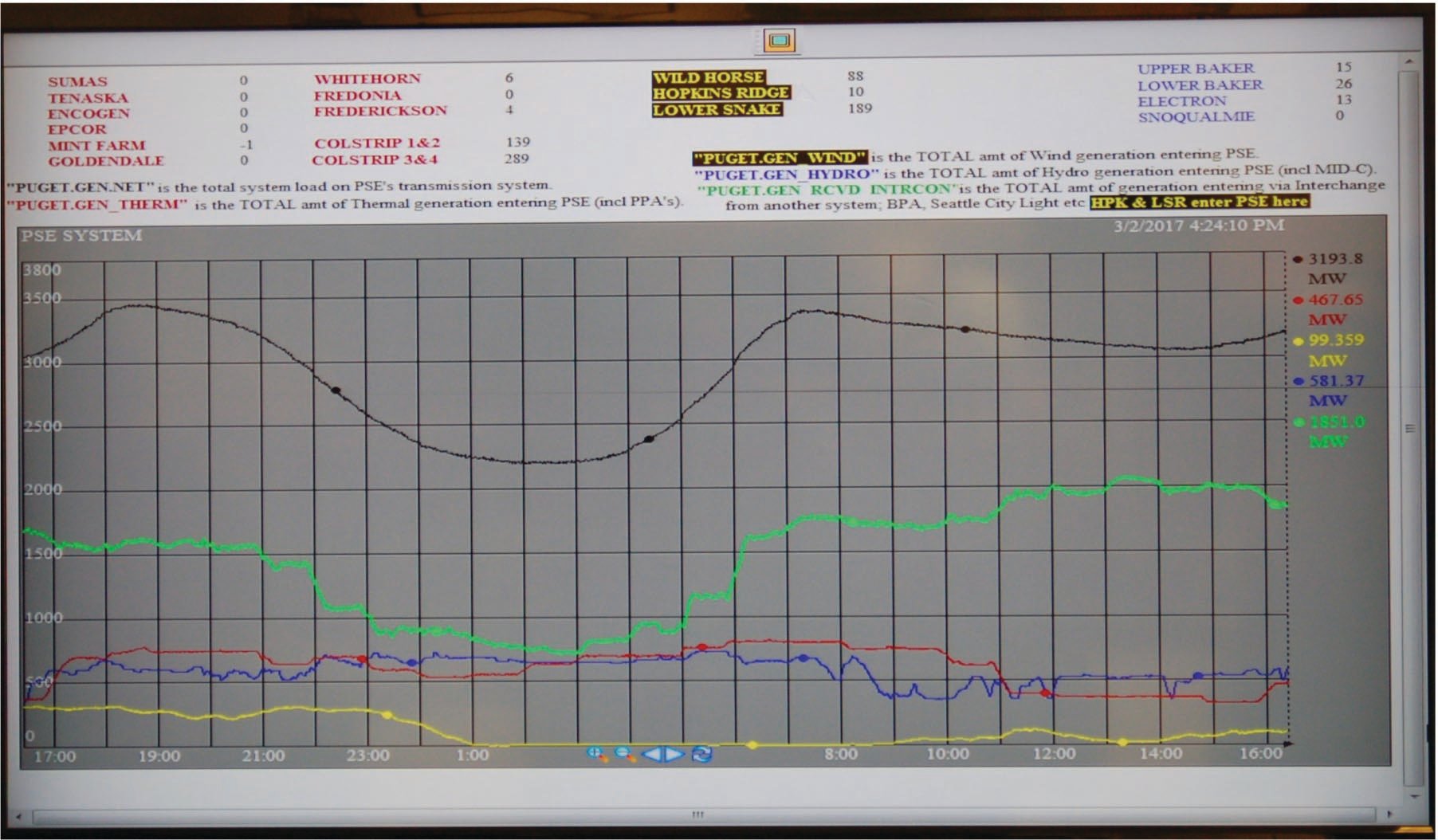 Lines of differing colors reveal power flow to and from this grid. The black trend represents the total load on the system from all consumers: industrial, commercial, and residential. Each of the other colored trends represents different sources of power to the grid. Red represents thermal-based power plants, split between natural gas and coal energy sources. Yellow represents wind turbine power generating stations, with zero output between the times of 1:00 AM and 8:00 AM on the graph (i.e. negligible wind blowing during that timespan). Blue represents hydroelectric generators. Finally, green represents power purchased from other electric utilities (e.g. Bonneville Power Administration and Seattle City Light).

This trend graph reveals wind power to be a relatively small percentage of the total power generated during the timespan shown, with coal and hydroelectric sources remaining fairly constant over that time and the balance made up by power purchased from other utilities.

With no large-scale means to store excess electrical energy, the stability of an electrical grid depends on generating stations’ ability to alter their power output to meet a continuously changing demand. Some types of generating stations lend themselves better to rapid changes in power output than others: single-cycle gas turbines, for example, excel at their ability to ramp power output up or down in relatively little time. Steam-based thermal generators such as coal-fired power plants are not so tolerant. Wind and solar generators operate at the whim of natural forces.

Needless to say, modern electrical power grids are highly complex systems. The critically important nature of a functioning power grid is difficult to overstate for any first-world nation, as so much depends on the uninterrupted flow of power from generating stations to customers. The complexity of power grids and their control systems will only increase over time as more renewable generation capacity (e.g. wind and solar) is brought on-line to reduce overall dependency on non-renewable energy sources. Large-scale energy storage systems will become a necessity for maintaining the stability of power grids dependent on power sources such as wind and solar that cannot be arbitrarily controlled.