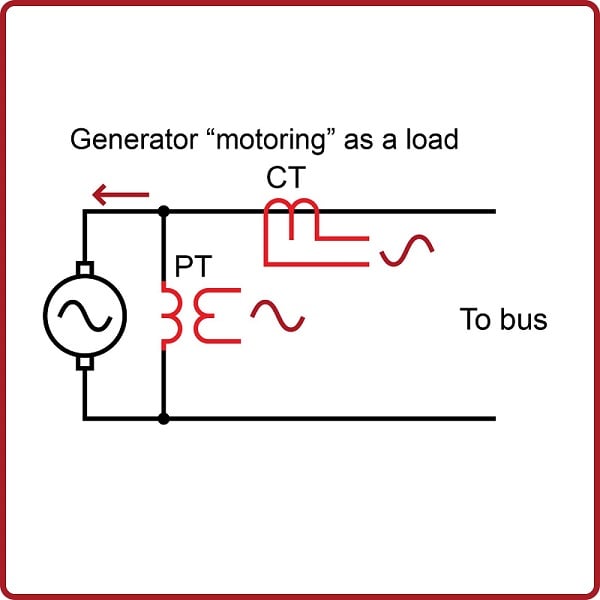 Direction of current flow is a significant characteristic of generators: if reverse current is driven into a generator, it will act as a load device and prevent proper generator function.

While 50 and 51 (instantaneous and time overcurrent) relay functions monitor line current magnitude and guard against excesses, there are applications where the direction of line current is just as relevant as the magnitude. In such cases, we need a protective relay function able to discriminate between current in one direction versus current in the other direction. The ANSI/IEEE number code designation for a directional current-sensing protection is 67.

One such application is generator protection, where an overcurrent relay monitors the amount of current at the point where an electrical power generator connects to a larger network of generators. The problem of directional current monitoring is easiest to understand in the context of a direct-current (DC) generator and battery circuit, which we will now explore as an introduction to the topic:

A generator acting as a source (in this case, to charge the battery) is fulfilling its intended function. A generator running as a motor, drawing energy from the battery as a load, is most definitely not fulfilling its intended function. Therefore, we would consider any current in the wrong (generator as load) direction to be excessive, while considerable current in the correct (generator as source) direction would be considered perfectly normal. If we were to install an overcurrent relay in this simple DC system, we would therefore prefer that it be more sensitive to current (i.e. pick up at a lower value) in the “reverse” direction than to current in the “forward” direction.

The fundamental problem we face in designing an AC directional current relay is how to detect this phase shift between forward and reverse current. In our DC generator circuit, a reverse flow of current could easily be detected by monitoring the polarity of voltage drop across a series resistance. In an AC circuit, however, the only way to tell if the line current is going the wrong way is if we compare the current waveform against another “reference” waveform (such as line voltage). The difference in phase shift between forward current and reverse current will be 180 degrees. Thus, an AC directional protective relay requires at least two signal inputs: one representing line current to be monitored, and another serving as a polarizing or reference quantity to be used for phase comparison.

This polarizing quantity may be line voltage, it may be a different current in the system, or it may even be a some combination where one signal provides backup in case the other polarizing signal becomes too weak. The challenge of finding a suitable polarizing signal in a power system for a directional relay stems from the fact that voltage and current signal strengths may vary wildly under fault conditions, which is precisely when we need the protective relay to do its job. Consider, for example, using generator line voltage as the polarizing signal to be compared with line current in the 67 relay. Imagine now if that generator suffers a major fault in its windings. Any other generators connected to the same bus will now send power into the faulted generator: a clear case of reverse power flow (into the generator) when we need the directional relay to trip. However, if the fault happens to significantly reduce the line voltage of the failed generator, the directional relay may receive too weak of a polarizing signal to properly operate, and thus may fail to trip the generator’s breaker connecting the failed generator to the bus.

Modern microprocessor-based directional relays have a definite advantage in this regard over legacy electromechanical relay designs, in being able to intelligently select the best polarizing quantity to use during fault conditions. Relays manufactured by Schweitzer Engineering Laboratories having directional protection elements for ground and neutral currents, for example, use a proprietary algorithm called “Best-Choice Ground Directional Element” logic to select from one of several real and calculated polarizing quantities (e.g. neutral current, zero-sequence impedance, negative-sequence impedance). Microprocessor-based protective relays are able to calculate symmetrical component quantities (positive-sequence, negative-sequence, and zero-sequence) from live measurements, and then use those calculated quantities in protection logic just the same as raw voltage and current measurements. Given the fact that negative-sequence quantities manifest only during asymmetrical fault conditions, and that asymmetrical faults are more common than symmetrical faults, the ability to calculate these quantities during fault conditions and use them to make trip decisions is a powerful advantage indeed.