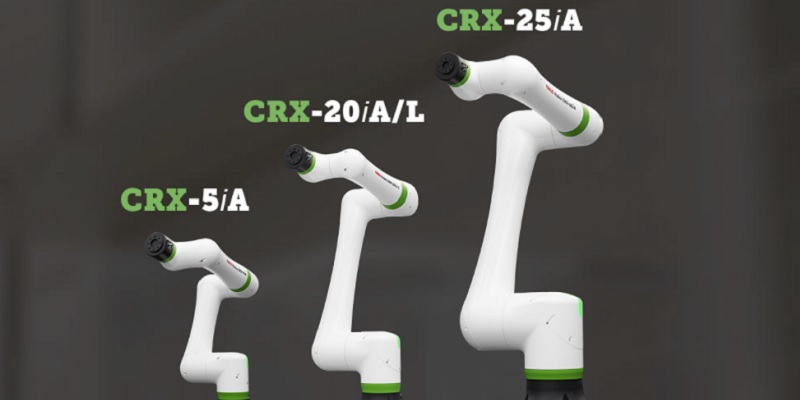 FANUC announced the release of 3 new cobots to its CRX lineup. Image used courtesy of FANUC

FANUC is already quite well known in the industrial sector for its extensive line of industrial robots, but they recently announced several additions to their cobot, or collaborative robot, family line. A cobot is an industrial robot that has specific design features to allow the robot to function without safety guarding. Some of these features include reduced pinch points between axes, maximum safe speed, the ability to sense even the slightest collisions with obstacles or people, and sometimes a soft exterior cover.

Cobots are gaining popularity because of the reduced safety restrictions and the ease of programming, allowing small to mid-sized companies to apply automated solutions to their production problems without the overhead cost of an entire caged workcell. 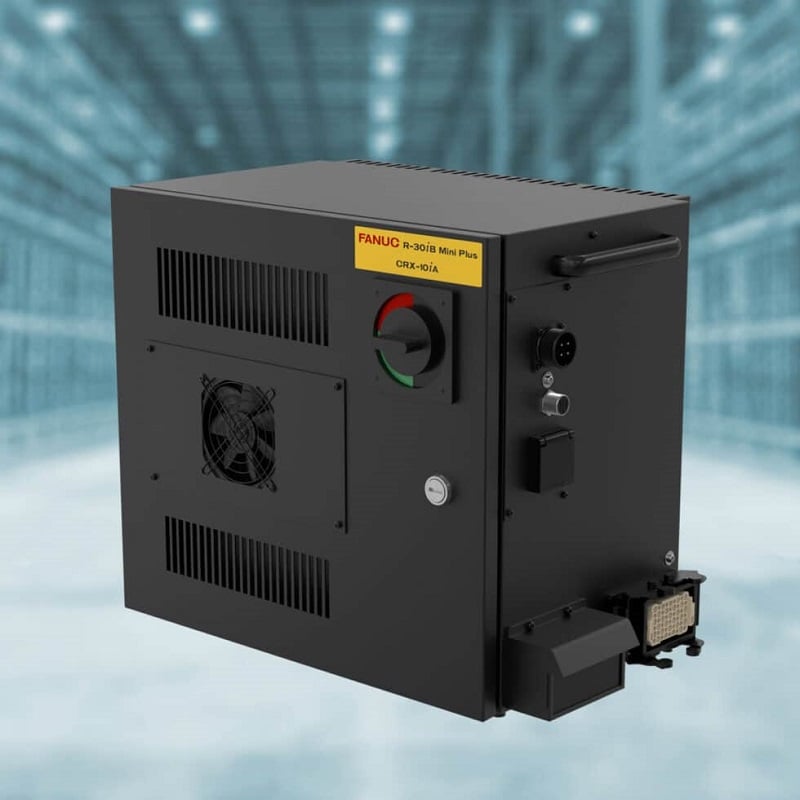 Currently, FANUC has the CRX-10iA and the CRX-10iA/L that have a maximum payload capacity of 10kg along with the CR family that has a capacity of 4 to 35 kg. The new additions to the CRX family deliver a total of 11 different variants of cobot offerings from FANUC. The new models are; CRX-5iA, CRX-20iA, and CRX-25iA which have payload capacities of 5kg, 20kg, and 25kg respectively. These models differ from the CR family of cobots FANUC already supports.

At first glance, the original CR cobot models look more like any typical FANUC robot, except sporting a green outer covering, but because they are classified as collaborative robots they do not require safety fences. The CR family uses the same technology and programming structure as the standard FANUC robot families The CRX family is completely redesigned with different programming structures with a new look and feel. These newly announced robots are not the first in the CRX line, but they do continue to support the growing trend of cobot adoption.

The exterior of these new CRX varieties is designed with a more streamlined shape, removing pinch points between the axes and eliminating sharp edges. Each model is powered by a standard 120VAC outlet which allows the robot to be installed virtually anywhere, since cobots have proven most effective in small-load applications where convenient power outlets are accessible. The end-effector (called the end of arm tool, or EOaT) has a special quick-release coupler that matches FANUC-approved tools, which consist of grippers, sanders, cameras, vacuum gripping, and pneumatic quick-change couplers.

Some standard FANUC add-ons are also available for the CRX family such as FANUC iRvision system, a package that allows the user to create a vision-guided robot program quickly and effectively. All of the CRX robots have a manual-guide feature. To program positions, simply move the robot to position, by hand or via the teach pendant, and press a few buttons on the teach pendent to save the position. The controller used to power the CRX family is the new R-30iB mini plus controller, which saves space outside of the robot envelope. 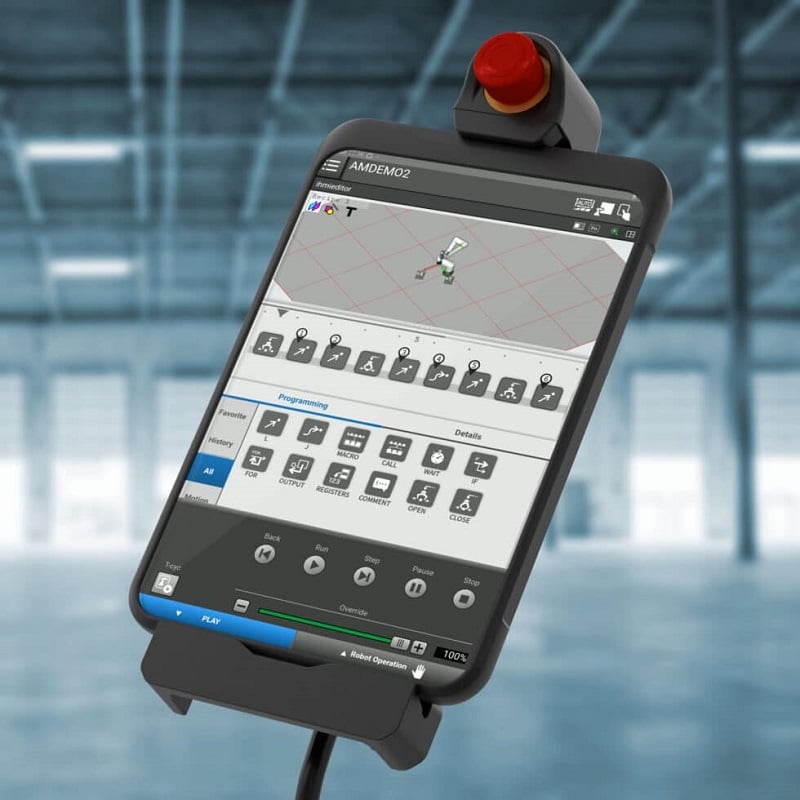 The teach pendant for the CRX family of robots is completely different than a typical FANUC robot. The pendant effectively resembles a tablet outfitted with an emergency stop, in contrast to the much larger robot pendants of other product lines. The software is designed to be intuitive and easy to use. The user simply drags and drops different robot functions, like pick-and-place, gripper toggling, or welding tip activation onto a timeline structure that the robot will follow.

The teach pendant also makes use of a graphical simulation of the robot. The robot can be moved manually or jogged using the pendant. When jogging the robot, the pendant simulation will show the operator the location and direction of the linear axes for the tool that has been selected, which can be very handy for new robot programmers. When a function is dropped on the timeline a series of parameters are required to be completed by the user which will allow the robot to complete the function. This package allows for quick and easy integration of the cobot.

Cobots are certainly not a new addition into the industrial robot world, but the technology used to develop and program their applications is evolving much faster than for traditional industrial robots. For that reason, it is exciting to follow the trends of these cobot releases and examine what sorts of new features can be expected from future cobot generations.