What are the new solid-state thermoelectric coolers from Laird Thermal Systems and how could they help control temperature in harsh industrial environments? 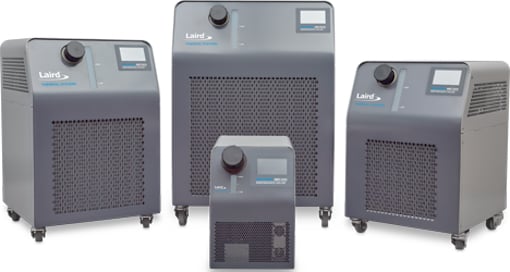 This means no greenhouse gasses could potentially escape the system. Since this device is solid-state, there are fewer parts than the compressor-based system. Fewer moving parts mean less maintenance and less noise.

Many processes in factories require controlled temperatures of products. These could include dispensing applications, specifically when the product needs to be maintained at a specific temperature in a cleanroom environment.

This would typically require a compressor-based chiller with fans that blow dusty air around to cool some medium. These chillers would then be pumped through a radiator with more fans to blow cool air around the product. Moving all this air causes concern for factories with cleanroom environments and can create excessive noise.

A thermoelectric chiller can reduce many of these concerns and save space. Some thermoelectric coolers are very small and can be placed directly on a box to provide a temperature-controlled surface to whatever is inside of the box. Larger versions work well for cooling laser applications where small amounts of dust in the air could affect the laser lens.

With a typical chiller, a refrigerant is compressed then allowed to expand which drops the temperature rapidly. While this process is usually very reliable, it can be very hard to control the temperature accurately.

Using a thermoelectric chiller allows engineers to better control the temperature within a tight tolerance because it relies on the amount of current passing through the electronics. The thermoelectric system can be sold with a recirculating pump. This can pump a cooling medium through heat exchangers. In another instance, the electronics are mounted on a plate, and a fan will blow air across the temperature-controlled plate.

The Nextreme Chiller is a benchtop recirculating chiller that takes advantage of solid-state thermoelectric technology. The chiller comes with a reservoir for the cooling medium and a pump to move the medium through the instrument that requires maintained temperatures. This chiller is designed for laboratory equipment that demands accurate temperature control. 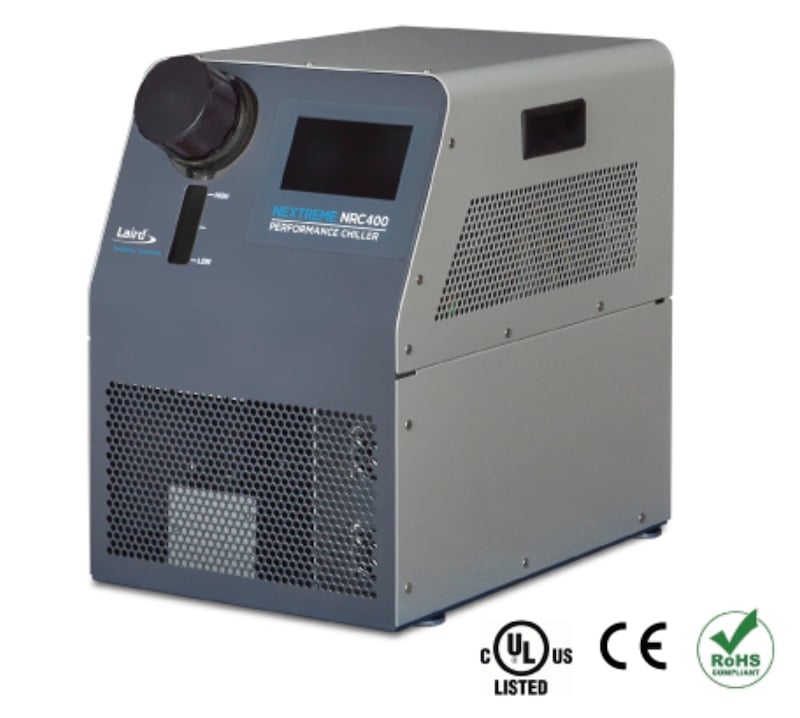 The NRC400 product aims to provide a cooling medium without harming the environment. It does this by using thermoelectric technology, so there is little to no risk of greenhouse gasses escaping from the system, nor were they used in the production of the product.

Laird designed the NRC400 for laboratories where precise temperature control is required. The NRC400 comes with input and output ports on the back of the unit for ⅜ diameter hose. The NRC400 can maintain +- 0.05°C with 400 watts of cooling power.

It also comes with an LCD touchscreen to set alarms and change cooling setpoints. The NRC400 is also very portable, weighing only 21 kg. Because there is no compressor or refrigerant, there should less maintenance and fewer moving parts.

Users can place the unit on a desktop close to the equipment because of its compact size. This particular model can use water or a water/glycol mix as the cooling medium. Laird Thermal Systems hopes this new portable solid-state thermoelectric cooler can help engineers streamline temperature control methods, specifically in harsh industrial environments.