Learn about the new control system from MIT and how it could help quadrupeds and other robots traverse different types of terrain.

The Massachusetts Institute of Technology (MIT) recently tested its new control system on its mini cheetah, a robot that uses its four legs to navigate in various harsh environments. The robot’s design is based on mimicking the movements of four-legged animals. In this case, it is designed to mimic the cheetah to create a more effective way of traversing difficult terrain.

One of the main problems with this type of system is creating a method for providing updated information on the terrain the robot is traveling over.

Control systems can adapt more easily to terrain that is relatively smooth and contains no dramatic breaks rather than terrain with rapid elevation and texture changes. The new system implemented by the MIT team can quickly adapt to rapid changes in elevation and can jump across gaps.

Gaps and uneven terrain are often difficult for these robots to traverse without prior knowledge of the path to be traveled. If the robot needs to update path information in real-time using a vision system, it can be difficult for the controller to keep up, making the robot slow. 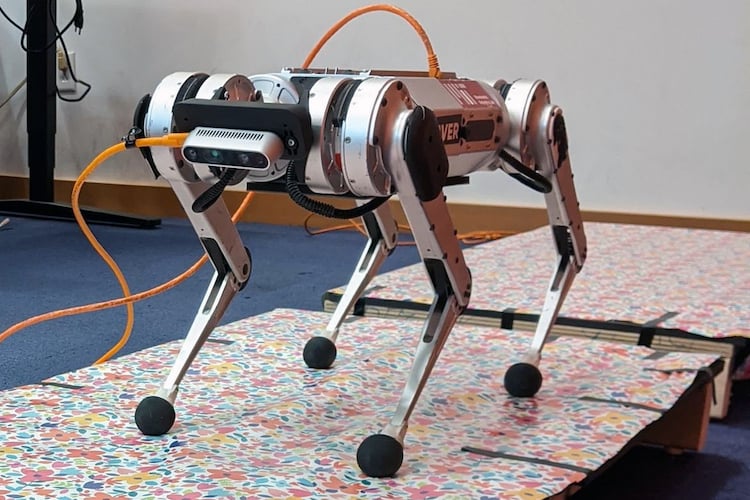 “In those settings, you need to use vision in order to avoid failure. For example, stepping in a gap is difficult to avoid if you can’t see it. Although there are some existing methods for incorporating vision into legged locomotion, most of them aren’t really suitable for use with emerging agile robotic systems,” mentioned Gabriel Margolis, a Ph.D. student in the lab of Pulkit Agrawal and a professor in the Computer Science and Artificial Intelligence Laboratory (CSAIL) at MIT.

Agile robots that utilize legs instead of wheels have many potential benefits. There are currently some robots in use that utilize quadruped locomotion.

Traditional robots often move with tracks or wheels or are completely immobile, relying on a base fixed firmly to the ground for stability. They rarely have the agility in movement that legs can offer, especially in environments that contain rough terrain. One of the main benefits of creating a robot that can move like an animal is its unique ability to use them in extreme environments where sending a human can be hazardous.

Companies like Boston Dynamics already have a quadruped robot called Spot that currently works in many different industries. The robot is used to automate tasks in:

The four-legged Spot quadruped has helped with inspections of equipment for high voltage electricity, helping to eliminate the possibility of damaging critical infrastructure.

Other companies such as ANYbotics also offer a quadruped robot called the ANYmal. Much like Spot, this quadruped can navigate in harsh environments such as mines and construction sites. MIT has recently added to the capabilities of this form of robotics with the addition of a new control system capable of processing sharp changes in terrain in real-time.

MIT is hopeful that their latest control system will create the opportunity for robots to move without wheels or tracks to be utilized in more industrial applications.