MIT scientists have created a muscle-controlled system that allows pilots to control drones via wearable sensors.

Called Conduct-A-Bot, the new system has been developed to foster collaboration between people and machines. The system was developed by a team from MIT’s Computer Science and Artificial Intelligence Laboratory (CSAIL) led by Joseph DelPreto.

CSAIL is known for discoveries related to computing, and in the last decades, the team has been at the forefront of developments in various areas, including robotics, encryption, and internet technologies. Now, the latest addition to the CSAIL family, Conduct-A-Bot is a system utilizing human muscle signals from wearable sensors to pilot a robot’s movement.

Conduct-A-Bot showcases CSAIL’s results in the field of electromyography (EMG), a technology that allows machines to read and measure muscle signals and movement directly, without need for offline calibration or per-user training data.

Together with the release of their new findings, CSAIL unveiled footage of a Parrot Bebop 2 drone being utilized by DelPreto through the Conduct-A-Bot system. During the tests, the drone correctly responded to 82 percent of over 1,500 human gestures, providing interesting data related to accuracy in robot-human interaction.

More generally, the researchers have in the past used this technology to further the developments of collaborative robots, an area where robotic precision is essential for the safety of engineers working alongside machines in industrial environments.

Electromyography and robotics are two disciplines that, in the last few years have been intersecting quite a bit. Particularly in healthcare, EMG is often used to provide patients who have lost hand function and finger dexterity with robotic hands capable of performing at least certain tasks. 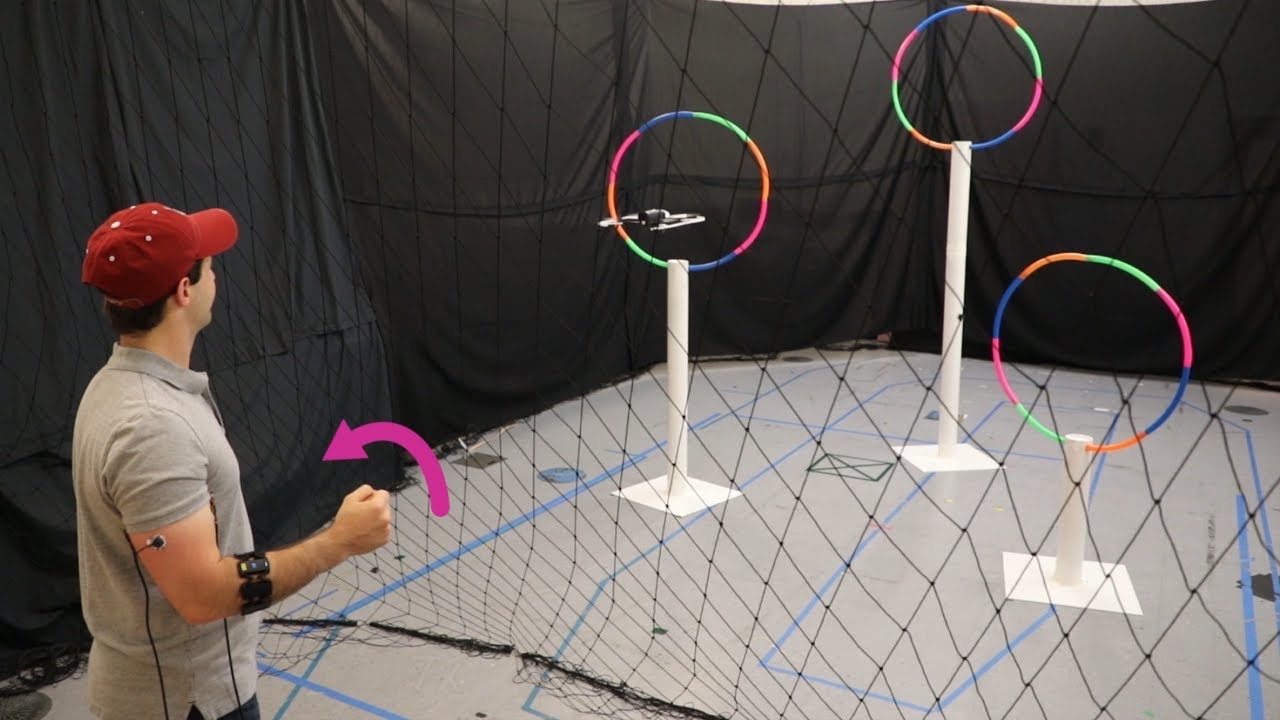 Joseph DelPreto uses the "Conduct-A-Bot" system to control a drone with his arm muscles. Image used courtesy of CSAIL.

However, as mentioned above, this technology has also been used, by CSAIL in particular, to control robots in safety-critical tasks. Back in 2018, the team of scientists sustained that “the ability to use human cognition in the loop can be key for recuperating safe robot operation.”

But this technology can also have other industrial applications. Drone piloting as shown by the new CSAIL research could be used more broadly to survey construction sites in virtual reality, for example.

Research in this area is still developing, and some years may pass before its applications become commercially available.

Still, it is without a doubt that EMG holds many promises for the advancement of various technological applications. As for Conduct-A-Bot, the CSAIL team that worked on it said they hope to run more tests in the future to include new subjects and extend the vocabulary to add more continuous or user-defined gestures.

The team is now working towards the goal to have robots connected to the Conduct-A-Bot system to learn from user interactions to better understand the tasks and provide more predictive assistance and increase their autonomy.

The paper with these findings was presented virtually at the ACM/IEEE International Conference on Human-Robot Interaction last month by lead author Joseph DelPreto and CSAIL director Daniela Rus.