Epson has expanded its line of All-in-One robots to include a six-axis robot that uses new No-Code programming software and does not require an external controller or drive cabinet.

Epson is well-known in the automation world for its industrial SCARA robot line. While SCARA robots are useful, they have some limitations compared with six-axis robots. Epson recently invested in expanding its six-axis robot line to include the VT6L All-in-One robot, which uses Epson’s newest programming software, RC+ Express.

No Controller and No Drive Cabinet Required

Epson’s new VT6L is labeled an All-in-One robot, meaning no controller or drive cabinet is needed to operate the robot. You simply connect power and communications, download your program, and your robot is ready to go. This simplifies the integration process and reduces startup time to mere minutes instead of days. 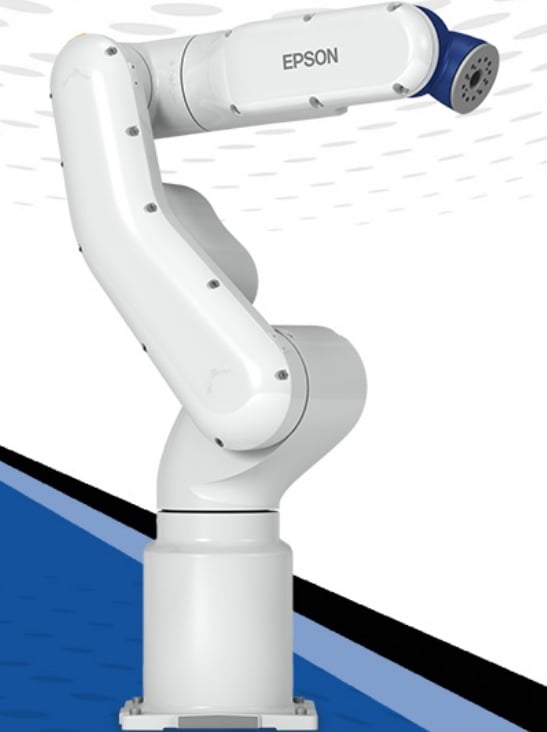 These All-in-One robots also don’t need battery backup. On a typical robot, the encoder values need to be maintained when the robot is powered off; otherwise, a recalibration is required, which could mean re-teaching positions. The VT6L uses includes an internal battery for storing encoder data.

The VT6L has up to a 900-mm reach with a payload capacity of up to 6 kilograms. Clean room versions are also available with an IP rating of IP67.

Every industrial robot requires programming software to develop the program the robot will follow. Some of these programming languages and software can be complicated for individuals without previous programming experience.

The VT6L uses Epson’s no-code programming software RC+ Express. This software uses a visual-based programming environment instead of the typical text-based version. Programs are developed using a block-style structure, and the jogging screens seem intuitive and simple to understand. 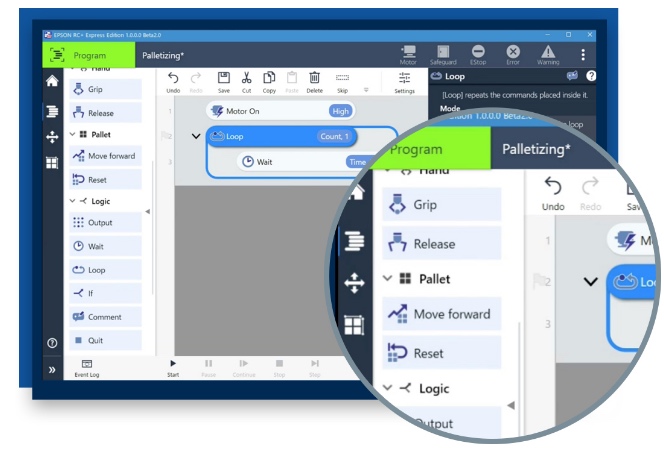 The software comes with standard program templates, such as pick-and-place, palletizing, and depalletizing. With these templates, a user can get a robot up and running in a few minutes—not days.

Six-axis robots are versatile and can be used in many functions, but a caveat to almost all robots is the location where they can be placed due to the size of the control cabinet or required voltage. Some robots require 480-volt AC three-phase, which is typically only found in commercial areas. The VT6L runs on standard, single-phase, 110- or 220-volt AC.

Control cabinets must be located near the robot arm, and extension cables are expensive. The VT6L All-in-One robot alleviates these challenges because it doesn’t require a control cabinet or industrial high voltage.

Applications of the Epson VT6L

The VT6L could be used in mobile applications on AMR units or for machine tending. Developing robot programs can take a long time and require trained technicians or engineers, but the goal of the RC+ Express software is to enable anyone to get the VT6L up and running quickly. The feature helps small business owners who want to add robotic automation to their process but do not have the staff to program the robot.

As robotic systems like the Epson VT6L become easier to install, program, and operate, the applications will only continue to expand.