At Northwestern University's Center for Robotics and Biosystems, researchers unveiled their latest research concerning the development of a new breed of collaborative mobile robots.

In a paper pre-published on the research-sharing platform, arXiv, the researchers detailed their experimental findings on the use of Omnid collaborative mobile robots (Mocobots) for tasks involving large payloads, payloads needing multiple contacts, and those requiring human assistance/guidance. Such tasks emulate those undertaken in warehouse, factory, and construction environments.

The Omnid Mocobots are designed to facilitate the autonomous manipulation of objects between bots and human collaborators. Teamwork is the keyword here, as one Omnid cannot control “all six degrees of freedom of a rigid payload.” Instead, the Omnids must work alongside humans and other Omnids.

The Omnid Mocobots exhibit passive compliance to ensure the safety of human collaborators and that moving payloads do not get damaged. The Omnids feature a manipulator mechanism that can execute something called manipular float mode which allows a human operator to move the bot in three degrees of freedom with a light touch. The manipulator float mode and the implementation of recentering control, which is executed by the mobile base of each Mocobot, makes the payload being moved in collaboration with human operators feel weightless.

The Omnids also feature a mecanum-wheel omnidirectional mobile base. Mecanum wheels allow robot designers to construct drivetrains that can move in any direction using a typical chassis shape. According to the researchers, unlike other robot arms currently used in robotics, the robot arms of the Omnids can stringently control forces exerted by their grippers. 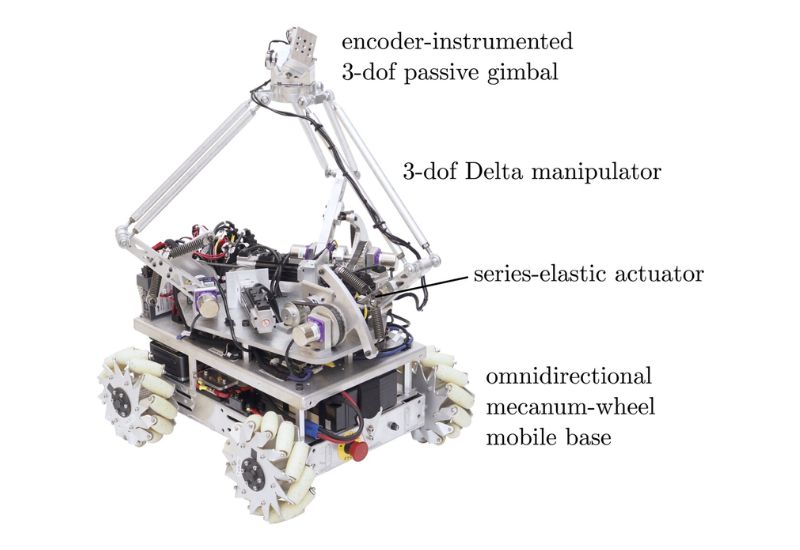 A picture of an Omnid Mocobot and its features. Image used courtesy of arXiv:2206.14293

In one test, the researchers evaluated the performance of Omnids working together and with humans to manipulate and maneuver large payloads. Professor Elwin and his colleagues showed that three cobots and one human were able to perform a six degrees of freedom collaborative assembly of 15.6 kg pipe into a fixture.

The researchers also found that three Mocobots and two humans were able to collaboratively manipulate a jointed payload with seven degrees of freedom among obstacles. In the paper, researchers commented, “This multi-Omnid collaborative behavior is an example of an emergent behavior without coordinated initialization.”

In future, Elwin and his research colleagues will explore the use of wireless communication to advance Mocobot collaboration and conduct “further performance studies of transport and assembly tasks” by both inexperienced and experienced human operators under varying control conditions. The researchers also plan to explore autonomous multirobot manipulation for assembly tasks.