Fuses and breakers are some of the most common safeguards to prevent electrical shock and fires. Learn about these two pieces of industrial equipment and the difference between slow blow and quick blow responses.

The primary reasons to interrupt the flow of electrical current are to prevent injury and to prevent fire. Safety devices are placed in series with the current and will open the circuit under predictable conditions. The idea is that if too much current flows through a wire, a “weak link” in the chain will break and stop current flow. This reduces the likelihood of a dangerous shock and keeps the wire from further heating, reducing the chances of a fire.

Because it takes so little current to fatally shock a human being, safety devices must act quickly. They must be designed to take the heat of high current conditions (or not, in the case of fuses), and also limit the exposure to arc flash hazard when they open the circuit.

While there are many types of safeguards, the most common in industrial equipment are fuses and breakers.

How Does a Fuse Work?

A fuse is a thin piece of wire that will melt if electrical current flowing through it exceeds a threshold value. In some respects, all wires are fuses if enough current flows through them, so the idea behind a fuse is that it is the weakest point in the system and will melt before any other components.

Fuses are typically packaged in glass, ceramic, or plastic containers to keep the molten fuse from damaging other components in the circuit. This package also prevents other arc flash hazards from reaching equipment or technicians as the fuse blows. 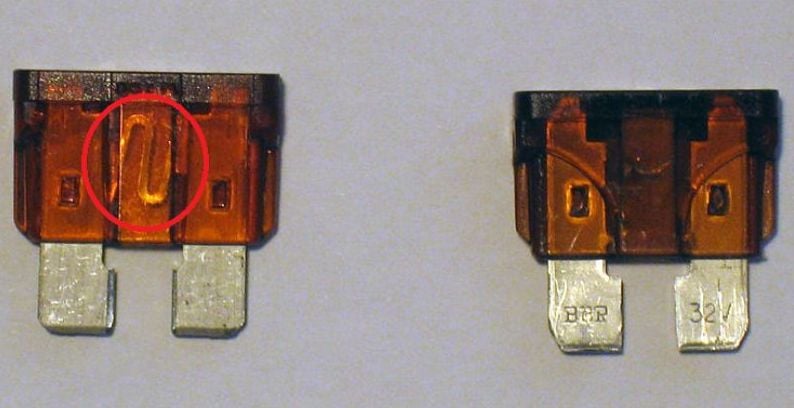 Figure 1. On the left is a good fuse, and on the right is a blown fuse. These cartridge fuses are commonly used in automobiles.  Original image used courtesy of Wikipedia, modified by the author

In Figure 1, notice the curved wire inside the good fuse (inside the red circle) that is missing from the bad fuse. Sometimes, the process of blowing the fuse will discolor the container, due to heat, vapor deposition of the wire, and so on.

When designing circuits, fuses should be sized at a current rating lower than any other component in the circuit. This way, the fuse is truly the weakest link and is the component that will fail under high current conditions. Physically, fuses should be mounted in a semi-easy to access way. On one hand, the fuse should not be buried deeply inside a device, such that the technician has to perform major disassembly to replace it. On the other hand, the fuse should not be so easily accessible that the technician simply replaces fuses instead of troubleshooting why the fuse failed in the first place.

Fuses are only good for one use, as the high current destroys the filament. However, fuses will last a long time, if not exposed to high current, because they have no moving parts. They are very uniform, as the thermal and electrical properties of metals are well known. This means fused systems require little maintenance.

How Do Circuit Breakers Work?

Circuit breakers are spring-loaded mechanical devices that detect when the current is too high. When this threshold is exceeded, a lever is released allowing the spring to push apart the wire connection. Typically, a breaker has three positions: “ON” means current can flow through the circuit, “TRIPPED” means high current triggered the breaker and broke the connection, and “OFF” is a way to manually open the circuit. 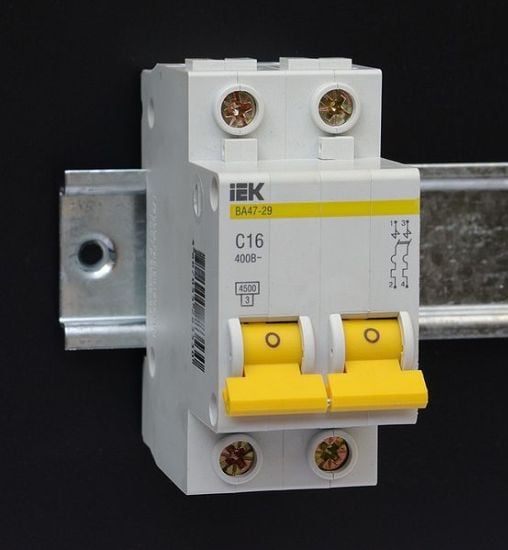 Circuit breakers, such as the one seen in Figure 2, are often mounted in a panel box such that groups of breakers are located together. Others are stand-alone devices that can be mounted near industrial equipment. Some circuit breakers are equipped with mounting equipment for lock out tag out (LOTO) locks and tags. In this case, the circuit breaker is set to the “OFF” position and the lock placed through a set of holes to keep the breaker from being reset to “ON”.

One advantage of circuit breakers over fuses is that they can be reset. By pushing the lever back into place, the circuit breaker makes contact again, and current can flow. For troubleshooting purposes, this is extremely convenient, as the circuit breaker can cycle many times before needing replacement. This means a circuit can be investigated and can trip the breaker over and over again without the need for replacement. Fuses are good for one use and must be replaced.

Circuit breakers are mechanical devices with moving parts. As springs age, they may not move the lever and break the circuit completely, or may not keep the wire far enough away from the contact to prevent it from arcing. Periodically, circuit breakers should be tested to ensure that they still function as designed. Replacing a circuit breaker is more difficult than replacing a fuse and may require the assistance of a licensed electrician.

Safety devices must act quickly to prevent an electric shock. Quick blow fuses and quick tripping breakers open the circuit the instant the current is too high. On the surface, this sounds like a good thing, but there are applications where this is a problem.

Consider the startup of an electric motor. As soon as power is applied to the motor, it draws a brief, inrush current that can be several times higher than the standard operating current. If a quick-tripping breaker is placed inline, it will see this large current and quickly shut down. However, this is unnecessary, as the high current will only need to flow briefly until the motor reaches its steady state speed.

To combat this problem, “slow blow” fuses and “slow tripping” breakers were invented. In these devices, high current can be tolerated for a small amount of time. They give motors a chance to start up, without tripping, but then still provide fire protection by not allowing high current to flow for very long.

It should be noted that slow blowing and slow tripping fuses provide little personal protection. They are used primarily for preventing electrical fires while allowing the necessary inrush current to devices such as motors, pumps, and so on.

Each application has its own set of design criteria, which may favor fuses, circuit breakers, or these other devices. Often, these are not meant to be altered by the end user, as tampering with the safety system may lead to dangerous working conditions as well as legal liability in one of these unfortunate events.