Thermocouple Types: Which One Is Right For You?

Thermocouple Types: Which One Is Right For You?

A thermocouple is simply two different metals or alloys connected together, usually welded. The junction produces a millivolt level voltage that increases with temperature. The voltage is approximately—not exactly—linear with temperature.

No thermocouple can serve all needs. This article focuses on choosing the best type for your application. We’ll not cover probe styles, physical installation, or measurement electronics. Other articles—and probe manufacturer sites—do that well. Most, though, don’t say much about selecting the thermocouple type. We’ll do that here. 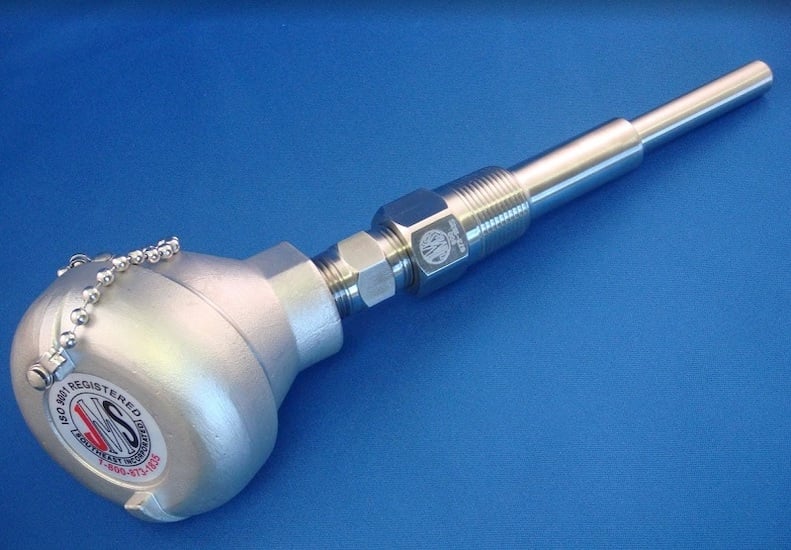 Almost any pair of metals can create a thermocouple. Many combinations have been studied. Each has its own temperature range, advantages, and limitations. Eight have been documented and given international standards, including published millivolt-versus-degree tables. Others, not officially standardized, also are used and documented.

The eight standard thermocouples, and some others, are designated by letters. Types E, J, K, N, and T use base metals and alloys. B, R, and S, intended for high temperatures, use platinum-rhodium alloys. B’s range goes highest, to 1,700 °C.

Three nonstandardized types, C, D, and G, use tungsten-rhenium alloys. They run even higher than B: to 2,320 °C. This article will not discuss them further. There also are other specialized types.

The first step—know your temperature range. Each thermocouple’s table shows its range, listing degree-by-degree millivolt outputs versus temperature. Be careful about using them over their full ranges, though. The tables, created by standards organizations, are based on laboratory measurements in clean environments. Continuous use at temperature extremes, and certain atmospheres and contaminants, may change the metal structures, leading to calibration shifts or outright failure.

Table 1 shows the published and recommended ranges for each thermocouple type as published by American National Standards Institute (ANSI).

Table 1. Comparison of the standard temperature ranges of thermocouples.

Thermocouples, with 2-plus degree accuracy, are less accurate than resistance thermometers (RTDs), precision thermistors, and many silicon temperature sensors (generally fraction of a degree). Their plus side is their wider range and, as compared to RTDs, greater ruggedness and lower cost.

Millivolt/temperature tables can easily be found by searching for Thermocouple Reference Tables. The NIST has them here.

Thermocouples are just metal alloys joined together. Metals can be affected by extreme heat, cold, oxidation, contaminants, moisture, etc. Any of these may change the thermoelectric voltage.

Let’s look at the advantages, and limitations, of the standard thermocouple types. Our discussion is about the atmosphere surrounding the thermocouple itself, not what’s inside a sealed probe.

The most popular type, due to its wide temperature range and low cost. It does well in oxidizing and inert atmospheres. It’s good in water and mild chemicals, dry areas, and many gases. Common applications include engines, oil heaters, boilers, the food industry, and general all-around ambient use. It is used in nuclear applications due to its relative radiation hardness.

Avoid reducing atmospheres and vacuums. Also avoid sulfur, cyanide gas, and hydrogen. Hydrogen, a reducing gas, can cause “green rot” of the chromel wire, changing its appearance and reducing the reading.

The opposite of K, it is good in reducing and inert atmospheres and vacuum—but NOT oxidizing atmospheres. Also low cost, it’s probably the second most widely used type. Its range is lower, and its sensitivity higher than K. Industrial uses include plastics and resin manufacture.

Newer, it’s considered an improved replacement for K. The published range is similar, but its high-temperature stability is much better. It’s also good in inert and vacuum environments, and in dry reducing atmospheres. In addition to the K applications, it’s used in smelting operations (iron, steel, and aluminum), gas turbines, and engine exhausts.

Type T is used for moderate temperatures, -200 to about +300 °C. At these temperatures it has better accuracy than others. It handles reducing, mildly oxidizing, and moist atmospheres, but at higher temperatures the positive copper wire can oxidize. Both wires are non-magnetic, so it’s good in strong magnetic fields.

Type T generally is thought to be the best choice for cryogenic temperatures, although E also is recommenced. In addition to cryogenics and other laboratory applications, it’s used for very low temperature freezers and environmental and food monitoring.

Its range is lower than K, but it has better accuracy and stability. Like T, it is non-magnetic. It is suitable for oxidizing and inert environments. It also is well suited to cryogenics: some people prefer it to T because its millivolt-per-degree sensitivity is higher. Other applications include pharmaceuticals and chemicals.

Meant for higher temperatures, these, and B, use platinum alloys. R and S are very similar. Both have pure platinum positive wires. They differ only in the amount of rhodium in the negative wire. Their characteristics and applications are virtually identical but they are not interchangeable: their millivolt-versus-temperature outputs are not the same. Uses include molten metals, heat treating, and glass and semiconductor manufacture. They’re good for oxidizing and inert atmospheres but not reducing.

Avoid metallic vapors and do not enclose them in metal tubes (probes). Metallic vapors can diffuse into the platinum, causing calibration shifts. They also can be contaminated by carbon and hydrogen.

This is the highest temperature standard thermocouple. Both wires are platinum/rhodium alloys, just different percentages. Applications are similar to R and S, but with higher temperature limits. It’s used extensively in the steel industry, where melting temperatures can be up to around 1500 °C.

Type B is not good at cold temperatures. Sensitivity is essentially zero below about 50 °C. Like R and S, avoid reducing atmospheres, metallic vapors, carbon, and hydrogen.

Each of the thermocouple types is subject to published accuracies, which may vary depending on the range of measurement. Because of the materials and the accuracy, each type may be better suited for certain applications, as Table 2 notes below.

Table 2. Accuracies and application notes for the standard thermocouple types.

Where Does the Voltage Come from? The Seebeck Effect

The thermocouple voltage is explained by the Seebeck effect, named after German physicist Thomas Seebeck. Here’s an attempt at a much-simplified explanation. See Figure 3.

When a metal is heated, its outer electrons become more active. If one end is hotter than the other, the electron pressure pushes them toward the cold end, making it more negative. Mathematically: ΔV = -S(ΔT).

where S = the Seebeck coefficient, ΔV = the voltage difference and ΔT = the temperature difference.

Anything that affects a metal can change its Seebeck coefficient, shifting the thermocouple’s calibration.

Any two joined metals can form a thermocouple. This includes the connections to copper at the measuring instrument, commonly called the cold, or reference, junction. The published tables assume the reference junction is at 0 °C. If it is not 0, such as reading it directly with a millivolt meter, the reading will be low by an amount equal to ambient temperature. Measurement instruments already contain built-in cold junction compensation.

Thermocouple wire costs more than copper, but if run copper from the measuring point the cold junction compensation will be incorrect. For example, if the connection to copper is at 200 °C and the instrument is at 25 °C, your reading will be low by 175 °C.

There is a compromise—extension wire. Extension wire is formulated to have the same mV-vs-temp as the thermocouple, but only over a limited temperature range, typically 0 to 200 °C. It also uses lower-temperature insulation. Its cost is lower, especially for platinum thermocouples. Be sure to only use extension wires where the temperature is less than 200 °C.