In several recent articles, we have highlighted IO-Link and some of its uses, including a how-to guide describing the process of assembling and programming an IO-Link project from a PLC. 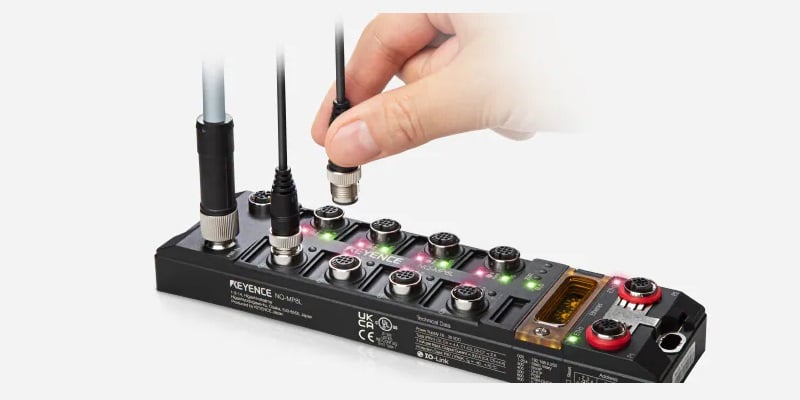 The Keyence Corporation of America recently announced the NQ series network communication module, a new IO-Link master device, to the product lineup, with the ability to automatically detect any Keyence branded IO-Link devices.

IO-Link is a simplified method of communicating with low-level devices while allowing the transfer of more information than simple discrete or analog information. Consider the way in which Ethernet is a protocol standardized both in terms of the connectors like RJ45, and the rate and transfer of data. Similarly, IO-Link is standardized with connectors and data in a way that allows many manufacturers to supply options for compatible devices.

An IO-Link master (hub) includes a number of M12 connectors, usually allowing signal inputs on 1 or 2 pins of each connector. In many cases, not all of the M12 ports allow IO-Link connections, but are used for standard discrete IO devices.

The Keyence NQ is supplied with nominal 24 volt (18-30 volt supported) power from an L-coded M12 connector (which means the 4x pins are not equally distributed so it cannot accidentally be connected into an IO or network socket). The unit also provides an internally connected similar socket for daisy-chaining power to multiple locations. 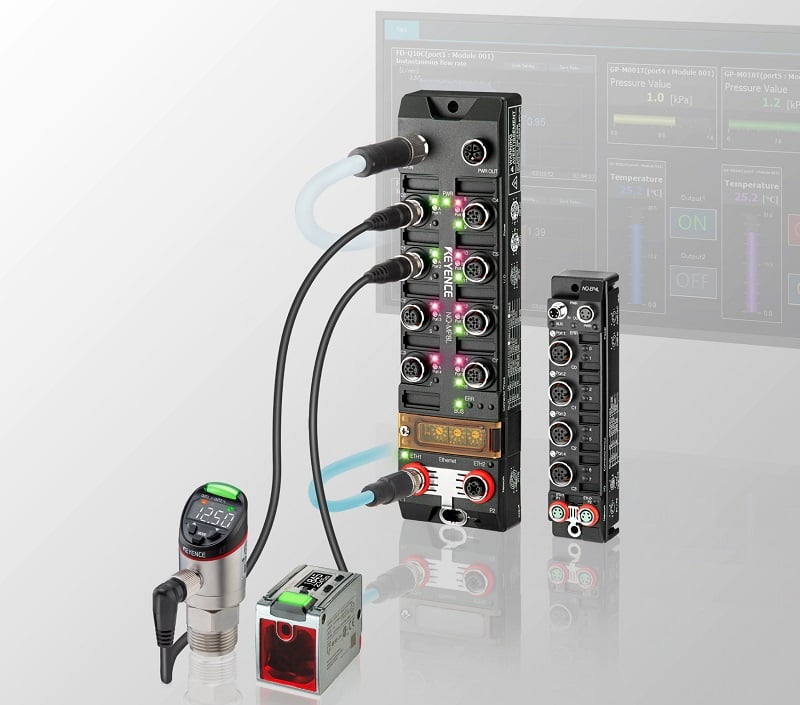 The MP8L model contains 8x M12 IO sockets, the modes of which can be toggled between IO-Link or DI. 4x of the ports may also be selected as DO. When used in DI mode, there can be up to 12x individual digital PNP input signals, since 4x of the M12 connectors allow two signal inputs.

With IO-Link enabled devices, sensors become much more capable than discrete counterparts. Limits can be set with triggers for high and low limits as well as variable signals for ranged devices. With versatile data collection options, these sensors can be dependable in a wide range of situations, and easily reconfigured to improve systems with little cost, effort, or time.

Finally, communication with a controller is possible with either EtherNet/IP, PROFINET, or Modbus/TCP, which makes this unit compatible with a wide range of current industrial networks. The connectors are, again, industry-standard M12, with address selectors sealed under a removable waterproof plate.

One of the advantages of the Keyence NQ IO-Link unit is the ability to configure and monitor devices without the need for an intermediate PLC with the NQ Monitor software. This allows the devices to be prepared before installation.

Using the network protocols, a computer can be connected to the IO-Link unit while in operation, allowing monitoring of signals, remote configuration, and advanced data handling applications by integration with edge or cloud computing services.

Keyence brand IO-Link compatible devices are automatically identified by the unit so the data is properly translated, but any IO-Link equipped device can be added from other vendors.

IO-Link solutions can greatly simplify a new or existing installation. With standardized connectors, data formats, and a wide catalog of available parts, Keyence and other brands provide the ability to imagine new possibilities for advancing technology in nearly any process.