In this first of an upcoming series, we investigate Siemens as a major PLC manufacturer, learning about the hardware, software, and key applications of each product lineup.

Siemens AG is the largest energy and industrial manufacturing company in Europe, and with more than 170 years of history, it is also an innovator in many fields. An essential part of its vast portfolio of products within its Industry division consists of programmable logic controllers (PLCs). Siemens’ line of PLCs is named SIMATIC.

The SIMATIC line was first released in 1958, and there have been four major generations of it since. The SIMATIC G launched in 1959, revolutionizing the world of relay controls with compact and energy-efficient transistors. Although not a significant generation change, the SIMATIC N provided faster and more reliable devices thanks to the introduction of silicon as a conductive material.

Then, in 1973, the company launched the SIMATIC S3 line, which introduced microprocessors and integrated circuits. For the first time, PLCs could be programmed via software, owing to the advances in computer science. The SIMATIC S5 line was introduced only six years later, in 1979. S5 PLCs were programmed using STEP 5, one of the first advanced computer-based PLC programming tools. It first ran on the CP/M and MS-DOS operative systems and was later available on Windows. The S5 PLCs allowed the control of complex processes because of this flexible programmability. 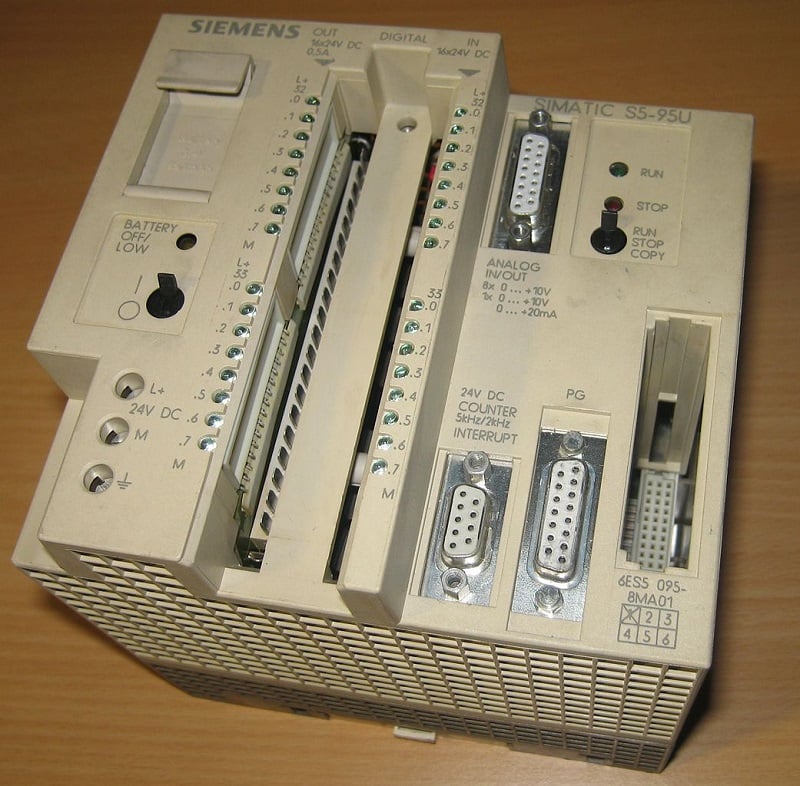 1994 was another groundbreaking year with the arrival of SIMATIC S7. Along with S7, Siemens released the first version of Profibus and introduced the concept of industrial networking to the world of PLCs. There were originally three main product classes in the S7 line: the S7-200, S7-300, and S7-400 PLCs. Out of the three models, the S7-300 became the most popular due to having the broadest range of CPU sizes and being well-suited for nearly all applications.

Another significant milestone was the Totally Integrated Automation (TIA) concept launch in 1996. With it, Siemens began to design solutions to automate the entire production chain. This eventually led to the release of the TIA Portal platform. Two more S7 product classes were released several years later, the S7-1200 (2009) and the S7-1500 (2012) PLCs. Both increasingly pushed the boundaries of performance while at the same time being more cost-effective solutions.

With a basic understanding of Siemens PLC history, let’s review the three leading SIMATIC PLCs present in the market today: the S7-300, S7-1200, and S7-1500.

The S7-300 PLC became the most popular among the first S7 product classes released, and its success helped establish Siemens as a leader in the automation industry. The S7-300 is a mid-range controller with a serial bus connector suited for extensive and complex process control tasks.

Compared with the S7-400, the S7-300 CPU is less powerful and supports less memory and less I/O. However, the S7-300 also has a smaller footprint and is more cost-efficient. The S7-300 provided a better balance of processing power and cost leading it to have higher popularity in the market. 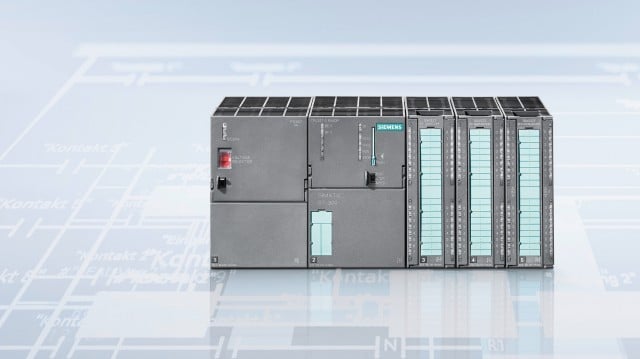 Siemens offers 22 different versions of the S7-300 CPU, which fall into four main categories: standard, compact, failsafe, and technology. The standard CPUs are designed for small to medium plants with different requirements in terms of scope and networking needs. The compact CPUs technically cover the same range as the standard CPUs, but they are better suited for environments where saving space is crucial. The failsafe CPUs integrate safety-rated controls to the system in one single device. Finally, the technology CPUs are specially equipped for advanced motion control. Siemens programmers may recognize the use of this terminology with ‘technology blocks’, commonly used for motion control in the TIA platform.

The S7-300 PLC has been on the market for nearly three decades, and Siemens has officially announced the start of the product phaseout. The S7-300 will be “definitively available” until 2023 and will be available as “spare parts” until 2033 according to the product phase-out notification. In the meantime, the industry is migrating the existing installed base to the more modern S7-1200 and S7-1500 PLCs.

When the S7-1200 was released, the intention was to solve several technical challenges presented with the S7-300, primarily being smaller with embedded IO, yet still having modular expandability. However, it is not considered the official successor of the S7-300, that task being left up to the S7-1500. In that sense, the S7-1200 is a sort of transitional model. It can do most of the functions of the S7-1500, and the software can be easily migrated from one model to the other. What sets it apart from the S7-1500 is its compact size, but it generally contains fewer I/O and has less memory and processing power.

The compact size of the S7-1200 with embedded IO leads it to being an excellent choice for on-machine control panels. Many applications, especially new installations, turn to this system, or rely instead on distributed IO blocks controlled by a central S7-1500. 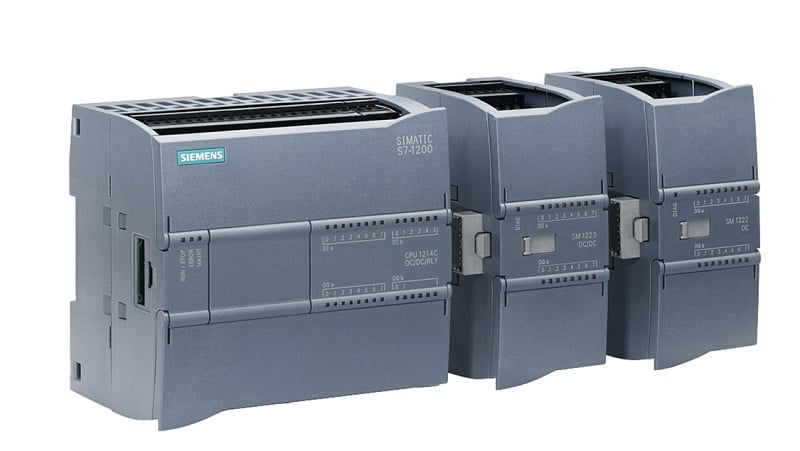 The S7-1500 line offers all of the flexibility and scalability advantages of the S7-300, but it is designed with the future of control automation technologies in mind. Therefore, many case study applications for this line revolve around Industry 4.0 and data analytics. There are three main S7-1500 PLC categories: standard, compact, and failsafe. The application range for each one is similar to that of the S7-300.

Processing power, performance, and code length are all significantly improved with the S7-1500. In addition, Profinet is the standard protocol used with the S7-1500 controllers, and they are designed for extensive network scalability. This processor would be commonly used alongside both local IO modules as well as distributed IO including the ET 200 series.

As technology advances, more projects are turning to the cloud to handle complex data manipulation and trending. The S7-1500 is designed just for these use cases, with protocols and networking capabilities for edge and cloud computing.

Until recently, the S7-1500 would still be compared against the S7-300 to choose the best solution for a new automation project. However, with the announcement of the S7-300 obsolescence, the S7-1500 has become the official solution. Now, many companies are planning to migrate to it. 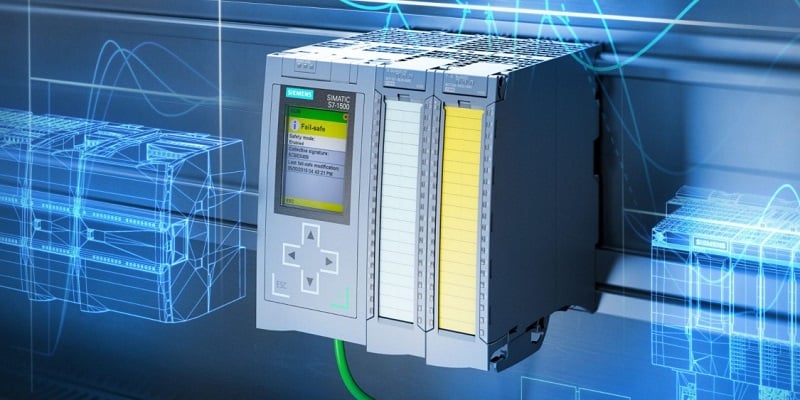 Siemens is a leader in many areas of digital technology, both hardware and software. Following articles will compare Siemens technology to other brands, providing an overview of operation and some defining features that establish certain PLCs into key industries.