Credited with coining the name ‘PLC’, Allen-Bradley and parent company Rockwell Automation are major players in the world of control systems. Learn how the hardware platforms have evolved into the familiar modern configurations.

Nearly all control engineers are familiar with the name Rockwell Automation, or Allen-Bradley. With the company’s long history of innovation well before the age of modern computer systems, it is understandable that many early developments in digital automation happened here. Founded in 1903, before the release of the first PLC, Allen-Bradley had already accumulated extensive experience in the world of electronics, becoming a worldwide leader in developing new components and technologies. Allen-Bradley is credited with coining the term PLC (Programmable Logic Controller) when it launched one of the first-ever programmable controllers in 1970, the 1774 PLC. 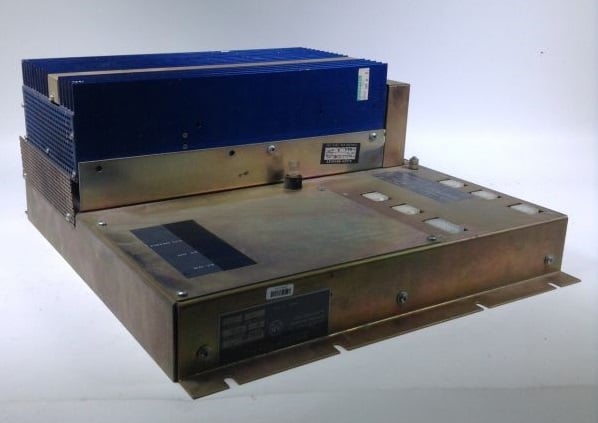 Figure 1. The 1774 PLC was one of the first PLCs ever built. Image used courtesy of Maxodeals

Around the same time as the 1774 PLC development (dubbed the PLC-1), Allen-Bradley then launched the concept of Data Highway, one of the first computer networks to be designed exclusively for a digital control system. The PLC-1 was followed by the PLC-2, PLC-3, and then the PLC-5 product line - which still includes many devices in operation today! In 1985, Rockwell International, a major manufacturing enterprise, acquired Allen-Bradley, which became Rockwell’s industrial automation division. Today, the Rockwell and Allen-Bradley brand icons are nearly interchangeable in the inner working of control cabinet hardware and software.

Another significant milestone came in 1990 with the release of the SLC500 PLC platform, which was more compact and affordable than its PLC-5 predecessor. SLC stood for Small Logic Controller. The first entry in the series was the SLC 5/01, which came with a range of 1k to 4k of memory and the capacity to control 30 I/O slots, which was impressive for its time.

Concurrent with the release of the SLC 5/02 and 5/03 models, Allen-Bradley launched the DH485 data highway. It is based on the RS-485 standard and is specifically designed for factory floor applications. The SLC 5/03 was the first to introduce commonplace PLC features such as Run Mode and Online Programming. It was also the first to support firmware upgrades. The consecutive model, the SLC 5/04, introduced an enhanced version of the data highway, called DH+. 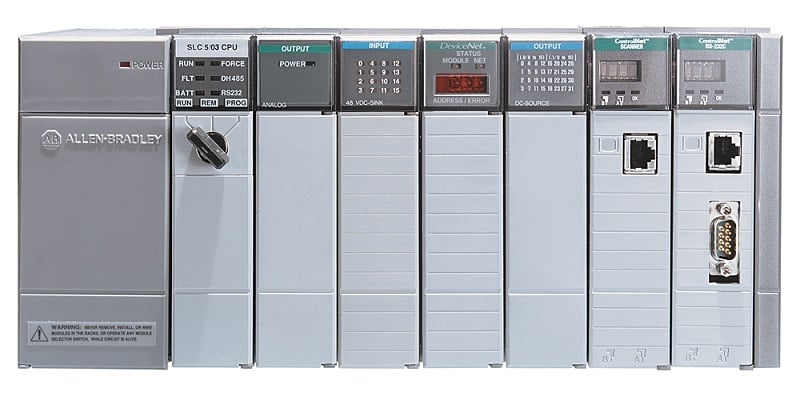 Figure 2. An SLC system with a 5/03 controller. Image used courtesy of Rockwell Automation

The last model in the SCL 500 series is the SLC 5/05, which was the first Allen-Bradley PLC capable of Ethernet-based communication. The DH or DH+ port from previous models was replaced with an Ethernet port, currently carrying up to 100 Mbps speeds. The SLC 5/05 comes in three memory sizes 16k, 32k, and 64k. This PLC is the only one from the SLC family that continues to be supported by Allen-Bradley today.

In the most recent major hardware revision of the chassis-based platform, Allen-Bradley released the new ControlLogix line of automation controllers. In later years, the CompactLogix series and the MicroLogix series were launched, trying to cover other market sectors for specific project scopes. The following sections review each of the three Logix lines of PLCs from Allen-Bradley.

The ControlLogix PLCs are the first release part of the Logix platform. These general duty controllers are modular and rack-based. They consist of a processor, a power supply, and the I/O and communication modules. The first controller in the series was the 1756-L1, launched in 1999, and several iterations have been released since. This platform superseded the SLC and PLC-5 families, offering more significant benefits, faster scan times, and higher memory capacities. 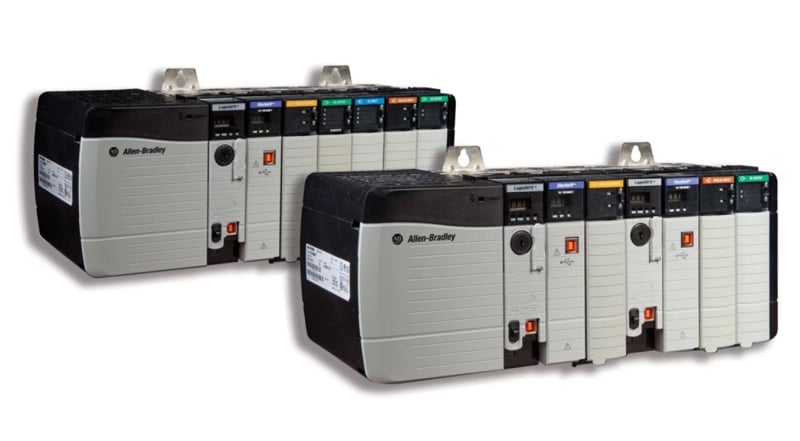 The latest model in the series is ControlLogix 5580, or L8x, which comes with a 20 times faster speed than its predecessor, the L7 series. The ControlLogix5580 comes with memory from 3MB up to 20MB. They are compatible with all communication protocols from Allen-Bradley: Ethernet/IP, ControlNet, DeviceNet, and DH+. Ethernet/IP speeds can reach up to 1 Gbps, which is generally adequate for modern automation needs of high volumes of data.

The CompactLogix PLCs were first released in 2008 to respond to market requests for more cost-efficient controllers. There are two variants of the CompactLogix line. One of them comprises modular, yet chassis-free controllers, which include the L30ER to L35X models. The other variant consists of all-in-on controller solutions such as L23, L2XER, and L1XER models with embedded digital and analog I/O connections. 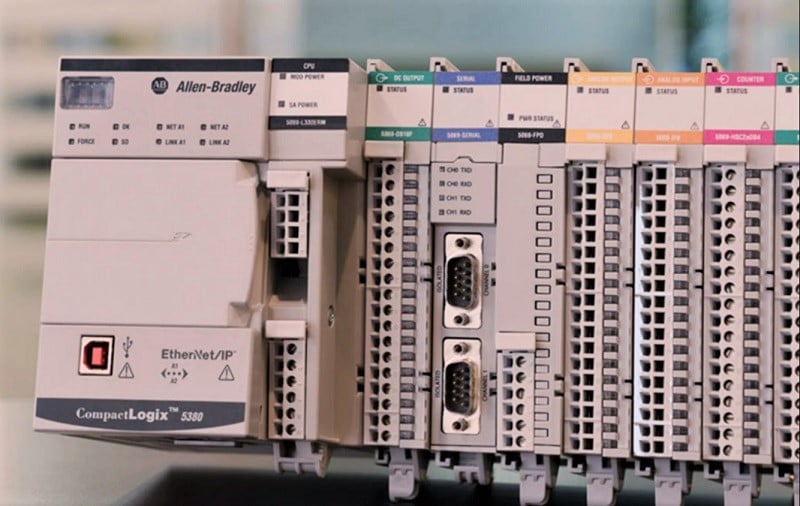 User memory can range from 0.6 MB up to 10MB. In addition, the 5380 PLC comes with two Ethernet ports capable of up to 1 Gbps of speed.

The original compact and cost-efficient line from Allen-Bradley, the MicroLogix, was launched in 1994. These smaller controllers came with a built-in processor, power supply, and I/O. Designed for small applications, there were models with both embedded and expansion I/O support. Many models from the 1000 to the 1500 are now discontinued, but still widely in use. 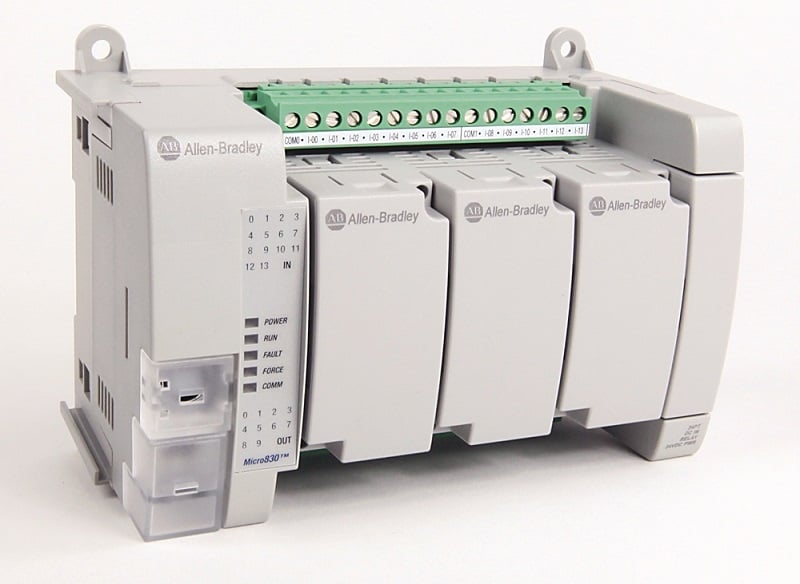 The most recent revision to the Micro line is the Micro800 series, first introduced in 2014. Many of the same design considerations were included, such as embedded I/O terminals along the top and bottom, as well as integrated communication channels such as USB and Ethernet. The Micro800 line also includes front-facing connections for add-on modules, further increasing capabilities.

Allen-Bradley has been a staple of the industrial engineering community for over a century, and the control system hardware and software produced along with Rockwell Automation is certain to remain a major player in nearly every industry, for virtually any project size and scope.